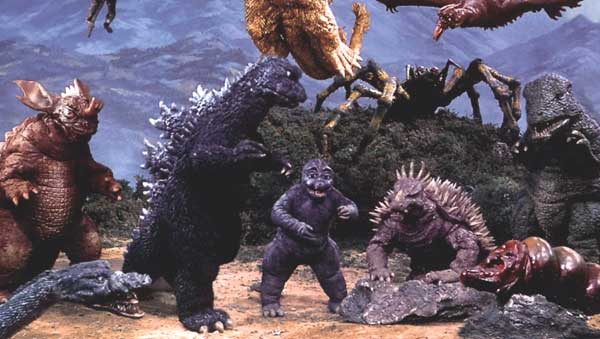 DESTROY ALL MONSTERS was planned as the last Godzilla film from Toho Company, which is why, we presume, legendary GOJIRA director Ishiro Honda, Just Doesn’t Give A Fuck anymore.

DESTROY ALL MONSTERS is a kiddie delight, featuring many Godzilla favorites roaring and breaking things in rubber suits – Godzilla himself (sporting his Cookie Monster headpiece), Minilla (Godzilla’s bizarre son), Rodan the bird-thing, Mothra (as a caterpillar only – guess they lost the moth outfit), King Ghidorah the three-headed golden dragon, Anguirus the ankylosaur-thing, Baragon, the deformed tyrannosaurus-thing (not the “rainbow” Barugon from GAMERA VS. BARUGON), Kumonga the spider, Manda the serpent, and a coupla other unnamed/arbitrary rubbers that I’ve never seen/noticed before.

On the other hand, if you’re an adult, your head will explode with the idiocy you are being asked to swallow in DESTROY ALL MONSTERS. Firstly – Monster Island: Mankind has been successful at herding all the monsters from Godzilla movies onto this one island and putting up virtual barriers (like electricity grids, magnetic shields, etc.) to keep them captive. That’s at least ten prequel movies right there! Secondly – this whole premise is based on a world acclimatized to the existence of “monsters”! What the hell?! 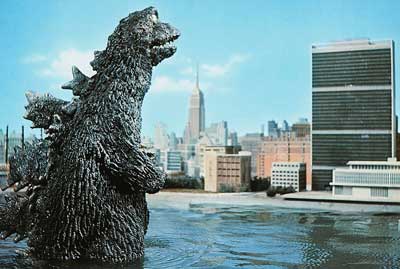 This word “monster” has gotten out of control. Its original meaning is “deviant” – an organism that does not conform to its species’ genetic structure.

Maybe Godzilla (being irradiated an’ all) might comply with the monster tag, but what are all the other organisms, like Anguirus and Rodan? Are they just regular versions of their species? If so, they’re not monsters. And if they are just species types how come there is only ONE of each of them?!

So maybe that’s why it’s better to use the Japanese word for these things – daikaiju.

Dialogue might be lost in translation from its original Japanese, so I am criticizing the stupidity of the translation as well as its intent: at the Moon base where they monitor Monster Island, one guy says, “The monsters look cute when you look at them from this angle.” Oh god. Captain Katsuo (Akira Kubo) calls his girlfriend on Earth; he “really thinks that monsters are here too. I can’t say for sure, but it worries me.” What evidence does he have? Besides bad screenwriting and translation. Again, sorry, Japan, for the humiliation you are put through by American studios.

But then – Katsuo is proven right! He discovers the subterranean base of the Kilaaks, controlling the monsters from the Moon! So I hear what writers Ishiro Honda and Kaoru Mabuchi are trying to say (i.e. the “monsters” are the aliens), and I again apologize, gentlemen, that your concepts came out so deformed in English.

Before he discovers the aliens in the Moon, Katsuo and his troops, who really love yellow jumpsuits, fly back to Earth (in a spaceship that looks suspiciously like Thunderbird 1) and find the people monitoring Monster Island mind-controlled by the Kilaaks. Katsuo meets the Kilaaks’ leader, a projection of a Japanese girl in a silvery bodysuit. Because that’s how all aliens communicate. The Kilaaks, from a small planet “moving between Mars and Jupiter,” blackmail Earth: “Let Kilaaks stay here and you live by their rules. If you agree, the monsters will go away.” (Which presumes that if Earth does not agree, the Kilaaks will continue to make the monsters destroy Earth, which means – no one wins?)

Rodan is attacking Moscow – and an American trying to do a Russian accent is heard reporting on the radio; Baragon attacks Paris – and a “French” accent is heard on the radio. And what about the old white guy with the “old white guy” voice. (Truly amateur hour with this American dub.) And Godzilla attacks New York, atomic breath and hawk-like scream/roar.

In an almost-powerful scene, the mind-controlled guy jumps out a window to his death; at his autopsy, they find a microchip behind his ear that was holding him under control. A good futuristic plot point. At THIS point, the Earth Commander orders Katsuo back to the Moon: “You will go underground with your spaceship.” Because ships built for space are also good for drilling into rock. Strangely enough, Katsuo somehow flies around underground in the Moon and finds the Kilaaks!

And this is the point when DESTROY ALL MONSTERS devolves to squawk-roaring and girl-punching, until all the Earth monsters gang up and beat the snot out of Ghidorah. And then Godzilla – remember that guy? – finds the Kilaaks hidden base and kicks it in. Then all the monsters skulk on back to Monster Island. And we wonder how they got out in the first place with their unbreachable barriers. And upon returning, are they going to reactivate their barriers to keep themselves locked in, even after they’ve helped mankind for no reward? Our heroes fly over in a helicopter and smile and wave, and it’s all we can do to hold in the vomit…

Even though this was the last supposed Godzilla movie, full marks to the model-makers, who still went to all that trouble building those landmarks and little cities, replete with heavy artillery (tanks, trucks, missile launchers, etc.) only to have them annihilated. Also, the producers had to get all those sweaty rubber suits out of storage at the same time, so in one sense, they were trying for a BIG sendoff for the Big Guy. However, it only diluted Godzilla’s role by having so many rubbers taking up screentime. And no one did anything to curb the goofiness that had overtaken the character immediately after his inception. To wit: that’s still the Cookie Monster headpiece.

Honda would go on to direct the next installment GODZILLA’S REVENGE (aka ALL MONSTERS ATTACK), which seemed like he was giving Even Less Of A Fuck, as that movie was made up of stock footage stitched together with new cheap scenes. Only after that embarrassment would Godzilla be partially redeemed with writer-director Yoshimitsu Banno’s socially-conscious GODZILLA VS. THE SMOG MONSTER. Then four films in succession that marked the nadir of Godzilla’s Showa Series (still using Cookie Monster), until the Heisei Series reboot (replete with vicious new headpiece) in 1984 with THE RETURN OF GODZILLA.