Named after a classic KISS song (the marauding opener from 1976’s Destroyer), DETROIT ROCK CITY follows four shiftless teens in 1978 on their quest across the American heartland to beg, borrow or steal their way into a KISS concert in Detroit. Appealing to the lowest of brows, the greatest of unwashed, the saltiest of the Earth, movie is a quaint enough road trip Psycho Circus with a few good gags, poorly executed – yet the whole exercise is about two decades too late.

Edward Furlong, Sam Huntington, James DeBello and Giuseppe Andrews are KISS Army members (in a KISS tribute band called Mystery), who are unconvincing as KISS fans let alone as rockers, Huntington and Furlong the only ones casually nearing the condition of “acting.” They have four tickets that Huntington’s Jesus freak mother burns, leaving them desperate, yet intent on making the concert.

If you had Great Expectations for the film (co-produced by Gene Simmons and “authorized by KISS” – meaning authorized by Simmons and Paul Stanley), then Love ‘Em and Leave ‘Em. Director Adam Rifkin seems able to construct good visual sequences, but doesn’t go All The Way, opting for prosaic slapstick in place of comedy. Sounds like a case of… “rock and roll pneumonia! We’re gonna have to call out… Doctor Love!”

The opening sequence is promising, as Rifkin gives us a montage of ’70’s iconography that places KISS in perspective with the times. It’s powerful, it’s heady, it’s nostalgic – and ultimately the best part of the movie, which then goes downhill like a Baby Driver.

The first KISS song we hear is the first cut of 1977’s Love Gun, the frenetic I Stole Your Love, a few moments later, the first song on Side 2, the title track, over the montage.

How do I know all this? Full disclosure: didn’t go near Google for this info; a deep, abiding knowledge of all things KISS ever since their posters decorated my walls and ceiling. But I never did scrounge up the incentive to send away for the membership paraphernalia because, as Gene’s own philosophy about marriage sagely advises, if I really loved them, I didn’t need a piece of paper or a jacket back-patch to Shout It Out Loud that I did.

But enough about my laundry. 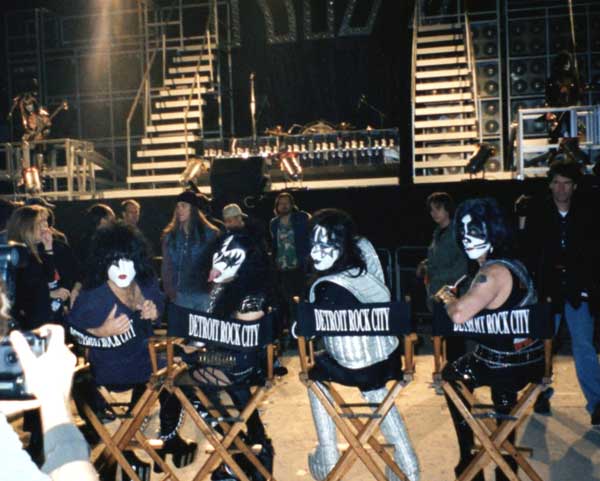 Oh my God! The evil KISS robots take the stage while the Real KISS aren’t looking!

Paul Stanley: “To call it a KISS movie does it a disservice, because it does a disservice to the KISS fans, which is what it’s really about.” Uh, Paul, it’s doing a disservice to KISS fans, to KISS, to generations born and dying into the future until the Sun runs out of hydrogen.

KISS don’t appear in the film until the final few minutes – and then in an annoying composite of the renowned KISS stage antics (blood, smoking guitars, fire-breathing) within one song performance, Detroit Rock City – apparently the one and only song they’re going to perform tonight, as they do their closing shtick after this song – drums rise, guitars smash, etc.

The most bemusing factor of this 1999 incarnation of the band is that (except for Frehley) they look exactly like their 1978 Hooligan selves. And they’ve dressed the stage show in classic ’77 Love Gun lighted-stairs period, which gives us a nostalgic twitch. That’s The Kind Of Sugar Papa Likes (there’s a deep cut for you, fans!). You’d think that filming KISS in their glory would be Easy As It Seems, but Rifkin’s got no Magic Touch and his amateur handling of the concert footage is Sweet Pain.

I can’t quite figure who this movie is aimed at. Actual fans would be turned off by the wholly unconvincing performances and naïveté of the filmmakers (film hits Rock Bottom when one of the guys sneaks in backstage by carrying a kick drum with a KISS logo amongst a group of roadies – I can’t even begin to deconstruct the stupidity of this scene). Fence-sitting fans are not shown enough KISS to be convinced, just pummeled with the fanaticism of the fans (who all seem to be rednecks). On YouTube, it seems this movie’s fan base are those who profess to be “not into KISS, but like the movie anyway.”

“Well, aw yeah! We’re gonna have to call out… the Firehouse!”