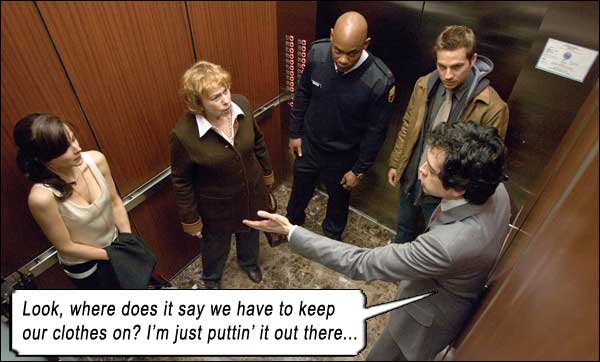 Fun as sharp as pointy horns.

M. Night Shyamalan writes the story behind DEVIL, a well-directed, elegantly-screenplayed thriller, about five people trapped in a skyscraper elevator.

One of them is the devil. (Bwohaha ha ha haaaaa!)

Hmmm, veddy intelesting. Though it is just as interesting what transpires outside the elevator, as Detective Bowden (Chris Messina, doing a fine Billy Zane) tries to rescue the trapped people, while his cop minion keeps uncovering the most deliciously dark secrets about the elevator brood.

People used to run screaming from an M. Night Shyamalan movie because it was scary – now they just run screaming because it’s an M. Night Shyamalan movie. But Night did not drape his bad self all over this production – he just sticks to the “story.” DEVIL is screenplayed by Brian Nelson and directed by John Erick Dowdle, and it’s a cool way to spend 80 unholy minutes.

Longtime Night cinematographer Tak Fujimoto creates moving visuals inside and outside the elevator cab, opting to go pitch black during the direst moments; film opens with a startling visual: aerial shots of Philadelphia – UPSIDE DOWN. It’s amazing how disorienting just flipping that typical cityscape visual can be.

Now you may ask, How exactly in this modern story does the “devil” issue even arise? It’s five people trapped in an elevator – where is there cause to suddenly accuse Mephistopheles?

That’s where the Superstitious Mexican Lame-o comes in. Jacob Vargas plays the quivering Mexican security guard who can’t stop Expositioning all over the place about his grandma’s tales of the devil walking the Earth when toast falls jelly-down (I kid you not!), “educating” the skeptical detectives and other security personnel on how children falling and missing the edge of tables means the devil is not around, but when they hit their heads on the edge, that means the Son of Perdition is in the hizz-ouse.

This is the only aspect of DEVIL with Night’s fingerprints all over it. The Mexi just can’t stop: “They’re all bad – that’s why they got on that elevator.” The story moves forward one step, the Mex flaps his yap backwards two steps: “He always kills the last victim in front of the person they love most – to make cynics of us all.” Now what the hell is THAT supposed to mean?

As tensions ramp inside the elevator, the mysteries behind all its occupants deepens on the outside; red herrings, twists upon twists, and that Mexican guy just asking to be bitchslapped, as he asserts to the Detective: “Everybody believes in him a little bit, even guys like you who pretend they don’t.” To which the Detective retorts absolutely correctly that you don’t need the devil – people are bad enough all by themselves.

The Detective’s right (“Gabby Johnson’s right!”): DEVIL didn’t actually need the supernatural element at all. All the equipment hassles that led to the elevator stall and the concatenation of equipment and human failure can and does go wrong right here in mundane real life, not because people are “bad” but because they’re incompetent and stupid. When the guard steps in water and electrocutes himself, when the maintenance guy falls down the shaft, the Mex might call it the devil – educated people call it careless. There is no need to attribute a malevolent outside force to coincidence.

The script is not flawless, yet smartly crafted and ties in all the characters well, with a pretty powerful ending if you’re a christian. The fashion nowadays is to critique Night as if we are soooo sophisticated… Is it too much to ask that you let yourself be possessed instead of prepossessed this one time?

Just keep me away from that Christ-y Mexican – “Sometimes he takes human form and torments the damned on Earth before he spirits them away – we call it The Devil’s Meeting.”

The rest of us call it Jack Daniels.