For To Make Democratize in America.

In the grand tradition of Iranian President Mahmoud Ahmadinejad visiting Columbia University in 2007 and denying the Holocaust, claiming Iran has no gays and lets women roam free with equal rights, so too is Wadiya’s dictator Hafez Aladeen, granted all courtesies when visiting the United Nations to extol the virtues of his oppressive Middle Eastern government, where the people think they’re free. Because if there’s one thing Middle Easterners know about Americans, it’s that they looove oppressive government where the people think they’re free. 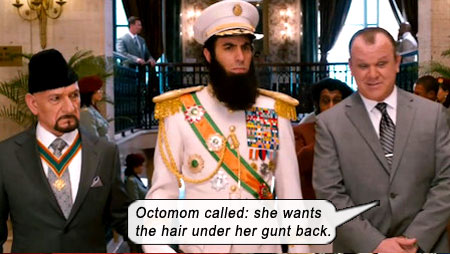 Sacha Baron Cohen’s actual “films” (ALI G INDAHOUSE, TALLADEGA NIGHTS) have never been as biting as his recent “mockumentaries” (BORAT, BRUNO), and the trailers for THE DICTATOR portrayed it like a half-hearted stab at bottling his mockumentary lightning in a feature film. But writer-star Cohen smashes it out of the comedy park, smoothly sidestepping our expectations in this satire on the American perception of democracy. He really has a handle on how far to poke into the redneck chest.

Directed by longtime collaborator Larry Charles, THE DICTATOR finds General Aladeen (Cohen) of the fictional Republic of Wadiya, “invited” to the United States to testify before the United Nations on his secret nuclear weapons program. The American government affords him every courtesy, while biting their tongues at his dictatorship – though not biting them as hard as they should, as the U.S. liaison (John C. Reilly) advises Aladeen bluntly, “While you’re here, you should visit the Empire State Building before one of your sand-monkeys knocks it down.”

Meanwhile, Aladeen’s right-hand man Tamir (Ben Kingsley), bought off by U.S. billionaires, is plotting to assassinate Aladeen and install an Aladeen body-double who will bow to his agenda of making Wadiya a democracy. Tamir gets his chance to install the double when Aladeen is kidnapped by John C. Reilly, who shaves off Aladeen’s distinctive beard, leaving him stranded in America…

Earlier, we met Aladeen in his gold-plated bedchambers (after screwing Megan Fox for jewelry); a lonely man desperate to cuddle, his pathos manifested in his extensive wall of Polaroids, featuring shots of him with superstars he slept with: Halle Berry, Oprah, Ahnuld!… So even though he’s reprehensible, we actually sympathize with this misogynistic, murderous anti-American anti-hero – kidnapped in a strange land, a fish out of water (like CROCODILE DUNDEE, only oilier).

In an attempt to assimilate, Aladeen calls himself “Alison Burgers” and finds work in a New Age shop run by Zoey (an earthy, ‘pit-hairy Anna Faris with a boyish haircut), while he tries to find passage back to his beloved country. He runs across Nadal (Jason Mantzoukas, in a great understated performance), one of his many minions whom he had “executed” in Wadiya – discovering they all came to work in a restaurant in New York called The Death To Aladeen Restaurant. Ever faithful Nadal still wants Aladeen’s name placed alongside the great dictators, like Kim Jong-Il and Dick Cheney, so begins hatching a terrorist plot on New York.

Unfortunately, Aladeen is falling for Zoey (“When the thought of someone’s decapitated head upsets you – that is love”), and recants on his terrorist ways, to Nadal’s utmost disappointment. Aladeen nonetheless retains his dictatorial arrogance – every time Zoey starts talking New Age, he cuts her off with “Who cares?” He starts regimenting her pothead shop, skyrocketing profits and slapping the employees into shape – literally. A hippie employee (Kevin Corrigan) asks Aladeen “Who are you, Osama Bin Laden’s best friend?” to which Aladeen retorts, “He’s not my best friend, although he’s been staying in my guest house since they killed his double. You visit the bathroom after him, you’ll know the true meaning of the word terrorism.” Aladeen also secures for the shop an A-rating from the FDA by holding the inspector’s wife and child hostage (cameo by Garry Shandling as the inspector).

Other cameos: Edward Norton, Aasif Mandvi, Kathryn Hahn, Bobby Lee in a hilarious turn as a lecherous Chinese leader: “Tommy Lee Jones let me roll it in my fingers for $200,000.” Very funny to suddenly recognize all the source music in a foreign language: R.E.M.’s Everybody Hurts, Gaye’s Let’s Get It On, et al.

With all the 9-11 references and the lauding of dictatorship, we wonder how THE DICTATOR passed muster with the Gutless MPAA. We can feel the inevitable arc of redemption coming – and it’s going to dilute the comedy, we know it! But wait, Movie Maniacs! This movie is another reason why I constantly call the Gutless MPAA numb-brained. Aladeen doesn’t arc to redemption at all – it only seems that way.

Cohen artfully, insidiously, twists our sympathies to root for the wrong man. Consider: Tamir (Kingsley) wants to assassinate Aladeen, so that he can set up a constitution and democracy for Wadiya, and create trade agreements with America (which all Americans agree is a Good Thing – ousting a dictator, creating democracy and jobs). Aladeen’s double is being groomed by Tamir to deliver a speech declaring his country a democracy, so America should rightfully be rooting for him, no? But we find ourselves rooting for Aladeen to stop his double giving that speech! We invest our sympathies with the reprehensible dictator, who declares tyranny as divine and wants to return to his life of mistreating women, murdering people for small slights and screwing movie stars.

How they work that magic on our simple minds. The true meaning of artful.

And Aladeen’s ending speech? A twisted poke in the eye at American ideals, highlighting how Americans embrace the very poke that blinds them:

Why are you guys so anti-dictators? Imagine if America was a dictatorship. You could let 1-percent of the people have all the nation’s wealth, you could help your rich friends get richer by cutting their taxes, and bailing them out when they gamble and lose. You can ignore the needs of the poor for health care and education. Your media would appear free but would secretly be controlled by one person and his family. You could wiretap phones, you could torture foreign prisoners, you could have rigged elections, you could lie about why you go to war, you could fill your prisons with one particular racial group and no one would complain. You could use the media to scare the people into supporting policies that are against their interests. I know all this is hard for you Americans to imagine, but please try. I will tell you what democracy is: democracy is the worst. Endless talking and listening to every stupid opinion. And everybody’s vote counts, no matter how crippled or black or female they are.
— General Hafez Aladeen.

Aladeen sees Zoey and refers to her as he continues: “Democracy has hairy armpits…democracy kisses you because she wants to, not because her father is in the next room chained to a radiator with electrodes attached to his nipples. Democracy is flawed; it is not perfect, but democracy… I love you!” Now before you jump up and shout, ‘That’s the redemption!’ keep in mind his “recant” is simply done for Panty.

We know his calls for “real democracy and a real constitution” are not real because the closing scenes find him being his usual dictator self. Nothing has changed in Wadiya. Ironically – this is what he told us democracy IS: you can say one thing and do another; blatantly lie to the people. Which is what America’s government does. Therefore, General Hafez Aladeen is more “American” than any Democrat, Independent or Republican!