A megalomaniac designs a satellite to harness the sun’s power. And James Bond is there to rain on his parade.

Cold Open Pretty Orange Explosion Zone: James Bond 007 (Pierce Brosnan, in his 4th and final turn as the superspy) surfs some rad waves into North Korea (reflecting the tenor of the times, no more Russians), infiltrating diamond dealers, led by General’s son Col. Moon and his lieutenant Zao. They blow Bond’s cover, and he hovercrafts (!) and fights his way to a dead-end, killing Col. Moon in the chase. We are always wondering why villains don’t just shoot Bond immediately, but now we can understand a revenge motive, as the General imprisons Bond and tortures him until he looks like Gandalf after a bad day in Mirkwood.

Opening titles slam in with Madonna’s Die Another Day, which is very catchy, but washed out with insufferable auto-tune that makes me wanna smack her in the mouth, for which she would thank me. Hey, it’s Madonna. The lyrics, “I’m gonna close my body now…” make a lot of sense over the montage of Bond being tortured and closing his body off to suffering. Graphics of naked women on fire and naked women made of ice – to presage the plot of the movie…

Bearded bloodied Bond is eventually traded back to MI6 for Zao (Rick Yune), who was obviously captured after the Pretty Orange Explosions, which gave him the oomph Bond gimmick  – diamonds burned into his face. When Bond is released by the General for the trade, he sincerely thinks the Koreans are going to shoot him in the back, and Brosnan really sells it. Gone is the smug, gone is the suave, here is a man readying himself for nothingness.

But Bond is far from home free – matter of fact, he is home-imprisoned – as MI6, like any government, doesn’t trust its captured agents, so keep him locked in quarantine, with M (Judi Dench) rescinding his 00 status. (There is a heated exchange over Bond’s cyanide pill, which he apparently “got rid of years ago.” Does this make him a good agent or a bad risk? Was he so over-confident about his powers of not breaking under torture that he thought he’d never need it?) He says he was set up in North Korea, so, abandoned by his people, he must go it alone to find the mole. 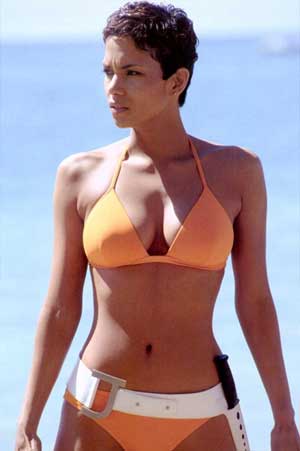 Berry as Jinx: ass ass in.

So it’s that old premise: Bring the hero low. Find the mole that ruined his life.

One of the funniest scenes of any Bond movie is surely Bond walking barefoot into a swanky hotel in his soaking hospital togs and Gandalf-beard, shirt open on wet torso, after escaping the MI6 facility and swimming the bay, telling the concierge, “My usual suite, please.”

Bond starts tracking Zao. Onto Cuba, where he meets the plain-bordering-on-ugly Halle Berry as she exits the sea (in obvious homage to Ursula Andress in DR. NO, except not so deformed). Suddenly she’s dry. Bond meets her. Suddenly she’s wet again.

Berry is Jizz—sorry, Jinx, and she’s as smug as Bond (because this was that odd time in the world when people were telling Halle Berry she was all that), though I don’t know why – she’s not even a quarter as pretty as Bond. Nice side-boob though. Jinx is also some ass– I mean, also some kind of assassin. The dynamic of an adept female spy working alongside Bond worked so well in TOMORROW NEVER DIES they do it again, with Jinx. She’s no damsel in distress, and Berry does a great job of selling the strong woman who’s every bit as badass as Bond.

Jinx is under the command of Michael Madsen, whose sudden appearance in the MI6 office alongside regulars like Colin Salmon, made me think HE was the mole (brand new face in the office, and a star to boot; from RESERVOIR DOGS in 1992, in the space of just the decade till 2002’s DIE ANOTHER DAY, amassing over 60 credits! He’s like the modern day Lyle Talbot!)

Written by Neal Purvis and Robert Wade (who both started with THE WORLD IS NOT ENOUGH, and would go on to write all the Daniel Craig era films), directed by Lee Tamahori (the brutal ONCE WERE WARRIORS, 1994), we once again feel the vignette-to-vignette nature of this Bond adventure. As with most of the convoluted plots of the Bond series, you can never quite work out the intricacies – but you always get the objective of each vignette.

Bond traces Zao to a DNA facility in Cuba. Jinx is there too, destroying files of herself. This place is one step beyond Witness Protection – it constructs new identities through “gene therapy” – reshaping your face completely. Zao escapes both Bond and Jinx. And Bond traces him to a London diamond merchant, Gustav Graves (the excellent Toby Stephens, smugger than Moore and Brosnan put together); a fencer, parachutist, knight, adventurer, whose oomph Bond gimmick is that he doesn’t sleep.

Gustav is constructing a satellite that can re-direct the sun’s golden beams on farmlands, or concentrate golden beams into destructive blasts. And he calls it… Goldeneye—no wait, that was copyrighted three films ago… damn! It woulda been perfect! 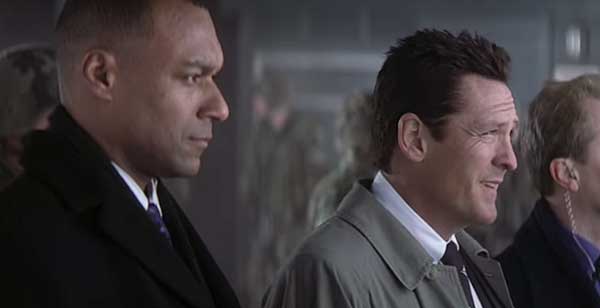 Bond touches tips with Gustav in a ferocious swordfight, well-staged through common rooms and libraries of this grande olde British club. Madonna cameos as a fencer; her accent cameos as British. When asked to bet on the Gustav-Bond fight, she demurs, “I don’t like cockfights.” It’s funny because she’s a slut.

Rosamund Pike is Miranda Frost, Gustav’s right-hand woman, young and smooth and ice-queen, turning down Bond’s advances. Until she sleeps with him. Oh, we can use the excuse that she’s a double-agent, but we all know it’s because in a Bond film, sexism wins.

Bond, back in the begrudging good graces of M, visits Q (John Cleese, now entrenched as the Quartermaster due to the tragic death of Desmond Llewelyn; sadly, Cleese would not continue into the Daniel Craig era). He previews an invisible car and, for a hot second, as his legs are refracted through the invisible car, we get an unintentional taste of The Minister of Silly Walks! Or maybe that was a sly wink?

Next insane location: an Ice Hotel. These things DO exist – which is a wonder in itself, constructed for tourist seasons and melted months later – but never in the fancy fashion of Gustav’s Ice Palace from this movie, a wholly impractical construct with hedonistic frills no sane ice hotelier would attempt). Jinx is there too!

We discover Gustav is actually Col. Moon whom Bond “killed” in the Cold Open Pretty Orange Explosion Zone, altered through gene therapy, Moon snidely admitting that Bond was his English character-model: “That unjustifiable swagger, those crass quips, the defense mechanism concealing such inadequacy…”

Bond: “So you live to die another day?”

It’s racism so deep we hardly see it. The plot twist required Bond to have a connection to the diamond dealer/sun king, and not realize it. So couldn’t they make this guy another Asian? At the least, an ambiguous Easterner? Instead of going all the way to WHITE MAN? Now I happen to be a fan of this particular white man (mostly because he looks like Clint Eastwood), but we can’t shake the feeling the movie is implying that another Asian guy would not have played well because all Asians look alike. Or – the filmmakers might think the audience would automatically regard him as the villain, because we opened with the North Korean villains. Thing is: we regard Gustav as the villain anyway, through his smugness and Bond’s suspicions, so… how do we get to kumbaya from here?… Do tell us, filmmakers!

The main annoying aspect is still the talking-not-shooting syndrome of all the bad guys. Or the shooting madly at the heroes when they’re running away, but as soon as the heroes give themselves up, the shooting stops. Frost says, with a sword at Jinx’s neck, “Drowning you didn’t seem to work. We’ll have to try something more to the point!”– Shutup with the puns and SKEWER HER!

For all their stupidities, Pierce Brosnan’s Bond films are enjoyable diversions, consistent in their tone and production design. It is during Brosnan’s tenure we see the upheaval in special effects technology in movies, reflected in the use of computers within the storylines of the movies themselves. As computers become more prevalent in this series of movies, so too does Computer Graphic Imagery in the production of the films. GOLDENEYE used that big green writing on computer monitors; by DIE ANOTHER DAY, we have digital readouts, modern-looking screens, virtual reality and holograms.

There’s a thug named Mr. Kil, a laser watch and laser guns, an invisible car, a ring that shatters glass, the villain’s solar suit that looks like Iron Man, a rocket car that races the satellite’s sun beam and – Bond para-sailing across rad waves with icebergs. Movie Maniacs, if you stayed for the gene technology that could change an Asian guy’s face into Nearly Clint Eastwood, you can suspend your disbelief for the parasailing.

I think it was more that Asian/Caucasian plot twist that alienated this movie with Bond fans than the parasailing, which was a dumb surface reason. By replacing the Asian guy with a Brit, the film lost our investment of emotion. It suddenly felt like it was forcing us to invest in a character which we should have a connection with – but which we don’t because – he’s not that character that we met for all of two minutes in the cold open, which we never had the chance to connect with anyway. It’s off the chain batshit. So we feel as lopsided as the airplane that flies through a Goldeneye sunbeam with Bond and Jinx and Frost and Clint Eastwood dressed like Iron Man.

A final scene finds James entering MI6 and laying Moneypenny (Samantha Bond) across her desk for a sensual pumpi—a hologram! Moneypenny’s fantasy… Still, it was kinda nice that both these characters got to makeout in this last turn for both of them.