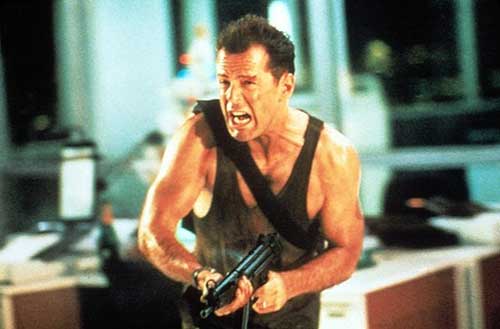 You should see this place on a Friday…

An Action Hero is Born Hard.

You know that irritating cliche: “rip-roaring rollercoaster ride”? Invented here: DIE HARD. The original and best. Action movie that carved a template for action movies – back in the day when even white guys could be terrorists.

This close to being a pissant B-Action-Movie, DIE HARD is where TV’s smarmy David Addison transitioned to Being Bruce Willis. Lost the hair. Gained the muscle. Still smarmy.

John McClane (Bruce Willis), a New York cop, arrives at the Nakatomi Tower skyscraper in Los Angeles, invited by his estranged wife, Holly (Bonnie Bedelia) to attend her company’s Christmas party and spend a few days (“Come out to the coast, we’ll get together, have a few laughs…”).

Meanwhile, Euro Bad Guys are sealing off the building, dispatching the perfunctory ineffectual security guards, then crashing the Nakatomi Christmas party with their automatic weapons and Euro accents. 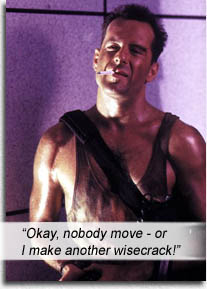 Led by Hans Gruber (Alan Rickman, deliciously taking big bites of cheese), we discover these terrorists are after the Nakatomi vault. Everyone hostage. Except McClane, the fate of the hostages in his wise-cracking hands.

Thus is birthed McClane’s own brand of Everyman, sweaty t-shirt, fly-in-the-ointment action-heroing, as he avoids capture by shimmying through Nakatomi’s unfinished floors and elevator shafts, killing the terrorists one by one, throwing spanners into the Euros’ plans while blowing things up.

During the siege, McClane allies with a beat cop on the ground via walkie-talkie, Al (Reginald Veljohnson), who can only talk in clichés. Paul Gleason, direct from THE BREAKFAST CLUB‘s (1985) detention room, is Police Chief Dwayne T. Robinson, and if he had his petulant way, everyone here would be in detention.

Ellis negotiates with McClane via walkie-talkie to stop throwing spanners and give himself up, so that the Euros can do their bad stuff in peace and everyone can go home. (Now we know the 80s loved the venetian blinds look – from movies to music videos – but in the offices at the top of Nakatomi Tower, where Ellis negotiates with Hans and McClane, there are no other buildings as tall, no other light sources higher than Nakatomi, and it is night – yet everyone in the office is COVERED in venetian blind shadows!)

Ellis fails, pays the price. And Gruber’s albino sidekick (Alexander Godunov) goes hell-Euro to kill McClane, as does Gruber himself, to no avail. McClane is just too slippery and his wisecracks too juicy, to be caught. We find out that Hans Gruber’s takeover of Nakatomi is more prosaic than it would seem at first – they are not terrorists, just “exceptional thieves,” going for 600 million in Negotiable Bearer Bonds – until The John McClane happens. 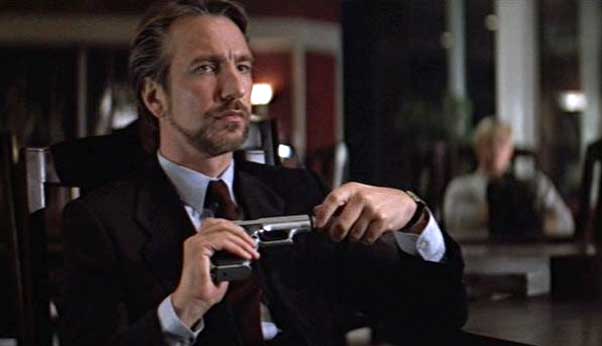 “I want to enjoy killing again. Bring me Ellis.”

With Beethoven’s Ninth Symphony motifs running passim, DIE HARD explodes from one action sequence to the next, nary a breath in between, loaded with every action movie cliché that didn’t know it was an action movie cliché until a decade later: the callous FBI guys, the ranting Police Chief, the rebel policeman flatfoot, the renegade lone cop out of his jurisdiction (is that three-clichés-in-one?), pretty orange explosions, outlandish action sequences (why must McClane take a fire hose off the roof when he could’ve run down the stairs with the other hostages? Stairs not good enough for Action Heroes?); the downed Bad Guy coming back to life for one last scare-thrill…

Though we would not realize it at the time, this first DIE HARD was thankfully R-rated, so the profanity and violence was at a premium. Though the action is all hyperbole, the offhanded swearing lends this piece a harsh reality when it comes to bad men and the Action Heroes who love to fight them – something which the makers of LIVE FREE OR DIE HARD (2007) sacrificed for a wider, younger, dumber audience.

From a novel by Roderick Thorp, Nothing Lasts Forever (1979, which was the sequel to his 1966 novel, The Detective, featuring the same cop character, named Joe Leland) – bet Thorp would never have guessed The John McClane would actually last forever…

Directed by John McTiernan (PREDATOR, 1987), with Jan de Bont as Director of Photography (a lauded action director himself now, starting with SPEED in 1994, often referred to as “DIE HARD on a Bus”), DIE HARD became such a shorthand for action movies that pitches would start “It’s DIE HARD on a boat,” or “DIE HARD on a plane,” until – the apocryphal story goes – some genius started his studio pitch, “It’s DIE HARD in a building”…