Bromantic comedy with a medieval aftertaste.

No one knows the right thing to do – especially not director Ron Howard (THE DA VINCI CODE) – when a man sees his best friend’s wife secretly having an affair, in the half-comedy, half-drama, all-indecisive THE DILEMMA. 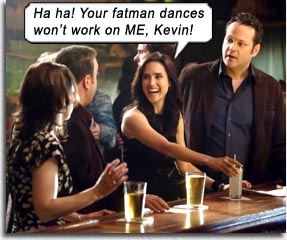 Ronny (Vince Vaughn) is paired with Beth (Jennifer Connelly) and Nick (Kevin James) is married to Geneva (Winona Ryder). Oodles of screentime is devoted to establishing the two couples as play pals, and establishing Ronny and Nick as best friends, and business partners on the brink of a breakout deal.

One day, Ronny sees Nick’s wife Geneva in a tryst with a younger man (Channing Tatum, all tatts and macho bravado). To tell or not to tell? His world begins to unravel as he deals with the burden of this secret.

As usual, marketing can’t deal with a story this nuanced and based in reality. It’s not a question of whether this is a “hilarious” movie or not; it’s whether the movie succeeds as entertainment, whatever genre it may be. Trouble is, the great Ron Howard (with writer Allan Loeb) can’t figure what genre it may be. THE DILEMMA reminds me of another Vaughn movie, THE BREAK-UP, where the farcical girlfriend-against-boyfriend plot took a dark turn when the film got too “real.” It eschewed Romantic Movie Protocol – even with that darling of romantic comedy fluff in it, Jennifer Aniston – and traveled its own path. So too, THE DILEMMA seems to take on a life of its own, despite the filmmakers trying to drive it towards comedy.

Ronny himself is no saint. He was a chronic gambler, a past that everyone thinks he is slipping back into with his strange behavior. Having clawed his way out of gambling debt, Ronny is now on top, with an upwardly-mobile job, a bitchin’ car (don’t know the make or model – I’m not a carhead – just that it’s the type of car that makes guys want to be into cars) and a girl who stood by him through the bad times – the type of girl that makes guys want to be into girls (jet-raven hair, striking eyes and angular face, Jennifer Connelly certainly makes my zoom lens extend). Ronny almost loses it all with his hesitation and Vaughn-speak.

Is THE DILEMMA funny? In places. Is it uncomfortable? In more places. It’s a watchable movie, but is ruined in small sequences by the director himself: every time Ronny makes fake excuses to cover his surveillance tracks, we are shown cutaway scenes showing what he is describing! Doesn’t Howard know that Vince Vaughn can carry a comedic monologue without irrelevant padding? And such exceptional production values – all to augment mundane gags which Vaughn can do with half the loquaciousness. I hate to say this about one of the world’s premier directors, but Howard can’t seem to extricate himself from his DA VINCI CODE style of bombast, which is totally inappropriate in this modern day dramedy.

The dilemma now is whether to allow Ron Howard near another comedy script. Maybe Jennifer Aniston can give him a few pointers.