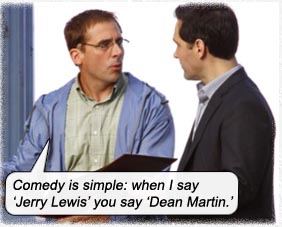 Carell and Rudd do a fine job with the uneven material they are stuck with, and are surrounded by an exceptional supporting cast that allows us to not feel like total schmucks for wasting our time watching this.

Tim (Rudd) is about to be promoted at his office job. To get in good with the executive crowd, he must attend an executive dinner where the execs hold a competition to see who can bring the biggest schmuck as a dinner guest.

Tim thinks he has hit the loser jackpot when he meets Barry (Carell) by almost running him over trying to rescue a dead mouse from the street (to put into one of his many dioramas featuring mice, from picnic scenes to The Last Supper). But scatterbrain Barry almost destroys Tim’s life before they can even make the dinner, ruining his relationship, his house, and his chances of promotion.

Jemaine Clement, as Kieran the performance artist, steals the movie effortlessly, departing from his FLIGHT OF THE CONCHORDS character completely, into an avant-garde beargarden of hilarious fetishism.

Zach Galifianakis is Barry’s boss, Thurman, who has probably been freebasing on General Zod as he wants everyone to bow down before him; he believes himself psychic enough to hold Barry in a state of paralysis with his mind, which Barry encourages by actually being paralyzed when told.

Built and busty Lucy Punch is Tim’s sexually-crazed one-night-stand stalker – a steaming sexy woman who is actually funny as well. Must be the British blue blood.

The great David Walliams (LITTLE BRITAIN) in a relatively straight role, the funniest thing about him, his imposing Swiss investor accent, that sounds nothing like a Swiss accent and even less like an investor.

Bruce Greenwood is Tim’s callous boss who hosts the dinner; Kristen Schaal and Larry Wilmore (THE DAILY SHOW) are some of the talented cast that keep the movie from sinking, and we even see Jeff Dunham and one of his puppets at the dinner (I’m surprised he didn’t win the schmuck competition).

Remade from the French film, THE DINNER GAME (LE DINER DE CONS, 1998), directed by Jay Roach (RECOUNT 2008), DINNER is a reasonable farce that falls apart when we arrive at the actual Dinner For Schmucks! Because throughout the movie, Barry was painted as a true schmuck, but at the dinner, he brings his A-game mouse dioramas. Oh, so he’s simply an eccentric artist! And who looks like the schmuck now trying to make fun of Salvador Dali? (It’s like trying to make fun of Jackson Pollock; sure, the guy is talentless, but to display the force of will to create so much product that trumpets your inadequacy – that’s genius!)

Throughout the story, Barry is an unfocused dweeb, his mind wandering on mundane tangents, with no social graces and clueless on human interaction. But we don’t see this side of him at the dinner – we see the artiste side. Why is Barry suddenly this poignant, passionate soul in touch with the universe through art? To get the Movie Message across, of course.

Shhhh-boing!! Message received! Turns out the real schmucks are the people holding the dinner, because they cold-heartedly laugh at others less fortunate than themselves… But hang on! There’s a difference between people “less fortunate” and actual schmucks. Schmucks SHOULD be laughed at! Barry, for the first part of the film, was a perfect contender for the title of schmuck: incognizant of a woman’s sexual advances, believing his boss could psychically control him, wrecking his friend’s house, relationship, career unthinkingly… His character didn’t arc to arrive at the message – it was rewritten, suddenly making him cognizant of what characteristics NOT to display in public. Leading us to realize screenwriters David Guion and Michael Handelman don’t really know what they’re doing.

What a coupla schmucks!