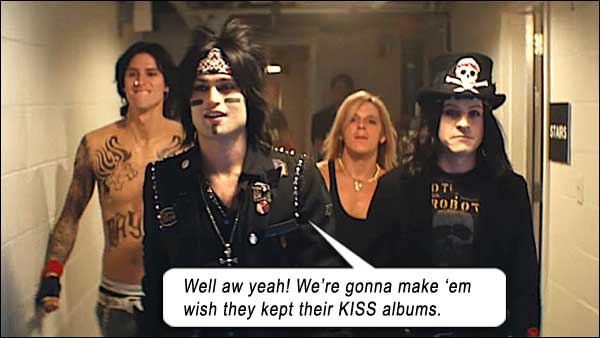 Maybe a quarter of it happened, and not like this…
— Logan, LOGAN.

THE DIRT opens with a title card: “This story is true.”

In this paean to rock band Mötley Crüe (remember when umlauts made everything evil?), every detail, every anecdote, every song and character and drug-fueled escapade is tossed into the air, picked up by a sharknado, shredded by Wolverine, and then inserted into THE DIRT in any old sequence because – sex drugs rock n roll, party on dudes!! 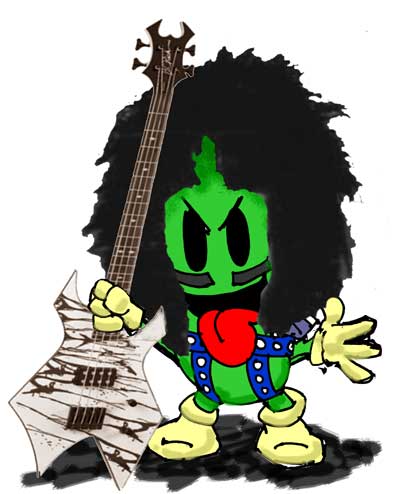 Whereas Queen’s recent biopic BOHEMIAN RHAPSODY muddled all its facts into a mush of generic Queen-ness, this Crue biopic is that problem writ large.

Bassist Nikki Sixx is a great rock songwriter, singer Vince Neil is a sex magnet, drummer Tommy Lee is a creative, entertaining whirlwind, and guitarist Mick Mars is a virtuoso hard rock player. The band’s first album, Too Fast For Love (Leathür Records, 1981), is still as bawdy and shocking as walking across broken glass. And their self-penned tell-all book, The Dirt: Confessions of the World’s Most Notorious Rock Band (Regan Books, 2001), is reportedly hardcore… but this movie, supposedly based on the book, is simply Crüe Untrüe.

From the junkets, Sixx and the boyz seem happy with it – for the same reason Brian and Roger were okay with the Queen abomination: if they want it released and making executive producer money for them, they’ll take it AS IS and eat shit, or go broke after all the money and years they’ve invested.

At least the soundtrack is sprinkled liberally with only early Crue tracks (the first two seminal albums especially, Too Fast For Love and Shout At The Devil, 1983), all re-recorded to reflect the environment they are being performed in (backyard, living room, pub, etc.) 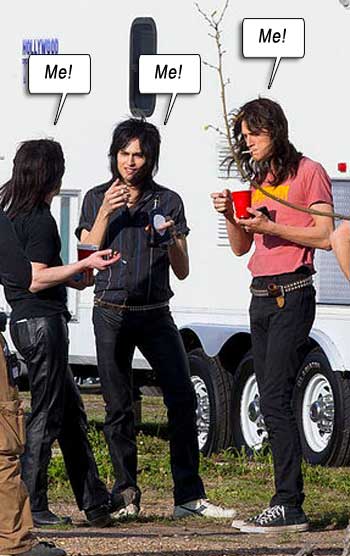 Early Motley Crue discusses who should look the gayest.

British-born Douglas Booth (NOAH, 2014) plays Sixx like some kind of businessman at a Halloween party. Being the principal songwriter and instigator of Crue, the story centers around Sixx, showing his youth as Frank Ferrana, and his ongoing clashes with his drunken mum and her revolving door of boyfriends.

Welsh Iwan Rheon (GAME OF THRONES) is Mick Mars, and although he captures a chunk of Mars’ cynicism, he and the makeup department never quite capture Mars’ look – Mars never had his forehead exposed in the early days, and Iwan’s snarl is pathetic – and he too ends up looking like “guy dressed as Motley Crue at Halloween party.”

And Colson Baker (aka rapper Machine Gun Kelly) actually does the best job inhabiting Tommy Lee’s persona and looks. Maybe being in the real music biz gives him that extra edge to play a real rockstar.

A major mistake casting Pete Davidson as manager Tom Zutaut, as he just looks like he’s donned a fake wig and playing a character on SNL. We’re waiting for the punchline – until we realize ironically that it might just be HIM.

David Costabile is Doc McGhee (who keeps maintaining he has managed other loutish bands, KISS included – which he didn’t start managing until well after leaving Crue’s employ), whose introduction to the band is via a fistfight, but Mick Mars breaks the fourth wall to tell us “This never really happened – but it’s cooler this way.” Oh, so the real story of drugs, dames and death is not enough for you? If they didn’t hire McGhee like that, then they didn’t fire him like this either: Sixx fires McGhee for bringing Sixx’s estranged mum to a hotel to reconcile with Sixx. It never happened. But it makes no difference, because no matter how tough or compassionate Costabile tries to act, we can’t stop seeing Gale Boetticher from BREAKING BAD.

And Tony Cavalero as the stoned twat Ozzy Osbourne might have gotten the accent down, but again, the makeup department failed miserably in getting the look right. And look, there’s outrageous Ozzy snorting ants and licking piss off the pavement. Maybe that’s what made him so talentless… Nope, he was talentless way before all the drugs and urine…

A feature length directorial debut by Jeff Tremaine (who directed all Johnny Knoxville’s JACKASS “films” and their spinoff, BAD GRANDPA), it’s no stretch for Tremaine to shoot Tommy Lee running leather-jockstrap naked down hotel hallways terrorizing the patrons. (Apparently, the filmmakers had to cover Baker’s tattoos and then reapply Lee’s tatts over the “bare skin”; the effect is seamless.) 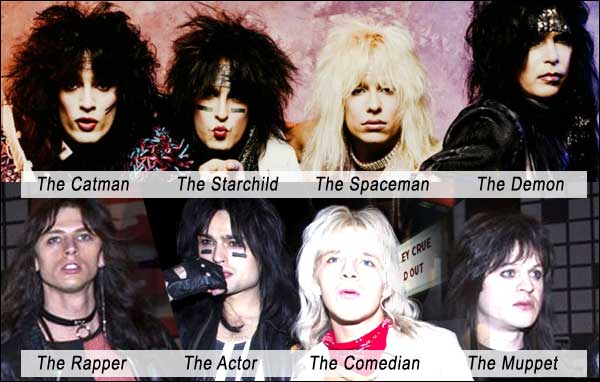 Tone of the movie changes when Neil is involved in a drunken car accident that kills his passenger, drummer Razzle Dingley, and when his 4-year-old daughter Skylar (Kamryn Ragsdale – what a great little actress!) dies of cancer. The problem with including details like these in a feature-length movie is not only that it dredges up PTSD for the actual Vince Neil and Razzle’s family and Skylar’s mum, but that the events themselves – unlike in a fiction – don’t lead to any redemption or revelation or defining a character’s arc. After these events, Life just simply… goes on. Just like real life. So the events don’t hammer as hard as they should (at least, not for viewers) because they do not resonate past their depiction on film. As many viewers have opined, this movie might have worked better as a mini-series.

Another thing that irks is how THE DIRT depicts Crue like the first band ever to misbehave on a monumental level. More than once, Doc (who keeps erroneously mentioning KISS, fer cryin out loud!) compares Crue to other bands he’s managed, citing them as the most extreme, but long before Crue, there were the real misbehavers – bands like Led Zeppelin, The Who, The Sex Pistols – who were tearing up hotel rooms, driving caddies into pools and double-dicking groupies when Motley Crue were in leather diapers.

THE DIRT is a fun diversion, but races through its agenda of sex drugs rock and roll party on Garth and ends up nowhere near as compelling as we know the trüe störy öf Crüe shöuld bë.