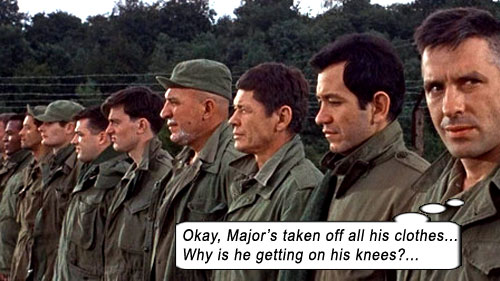 Classic! Explosive, action-packed, funny and filthy, THE DIRTY DOZEN is the best Boy’s Movie of the millennium! If you’re between 14 and 24, you will be inspired by this movie; it was the HALO 3 of its day.

In World War II, twelve American military convicts, each a different flavor of crazy, are snatched from the jaws of death row by a U.S. Army Major, for a suicide mission behind German enemy lines. Salt away in jail – or die free for your country. They all accept, all with the intent to try an escape at their first opportunity, but under the canny tutelage of the Major, slowly become a team. A ragtag team. That word invented here.

Lee Marvin is stoic Major Reisman, willing to bend orders to get his men in shape for the mission; overjoyed when they rebel against him using the collective “we”: ‘We’ don’t wanna shave; ‘we’ want hot water…

Charles Bronson is Wladislaw, a Polish scrapper with a death wish.

Big Jim Brown (“the greatest player in NFL history”) is Jefferson, who does an explosive endgame run that will live in legend long after his football career.

John Cassavetes is wild-eyed Victor Franko, the actual star of this movie, with the most lines and the definitive character arc.

Towering Clint Walker is gentle giant Posey, the “Lenny” who doesn’t know his own strength.

Telly Savalas is religious zealot Maggot, whose distaste for the wiles of women starts the siege on the German stronghold before schedule.

Donald Sutherland is slow-witted Pinkley, whose impersonation of a general would put the buck’s fizz up Robert Ryan’s knickers.

Robert Ryan is a straight-laced colonel who looks down on Major Reisman’s secret mission and his disheveled methods; in trying to prove his veteran soldiers are more effective than Reisman’s “dirty dozen” he is beaten like a red-headed step child.

Ernest Borgnine is a general who gets a big laugh out of Ryan’s knotted knickers.

Familiar face Richard Jaeckal is a sergeant, basically the same role he would play in the other underdog war movie of this decade, THE DEVIL’S BRIGADE (1968). George Kennedy mopes around as an observer.

And there’s Trini López. Whereas half the actual Dozen faded into obscurity in filmdom (besides those major stars covered), López is worthy of mention here only because he was the subject of the hands-down funniest joke in SLEEPLESS IN SEATTLE, when Tom Hanks complains about women falling into weepy tears over some romcom, then launching into an improvised tearful sonata on a scene from THE DIRTY DOZEN, unable to contain himself when Trini López “busted his neck while they were parachuting down behind Nazi lines… ”

Directed by Robert Aldrich, THE DIRTY DOZEN was made at a time when being in the military was not a giant wank. It was actually cool once. Seeing Bronson and Marvin and Cassavetes in that army green was inspiring. As Pacino might say in DONNIE BRASCO: “These are men are men.” Nowadays, the military brand has overrun the government and even the police force; military are given all manner of respect that they don’t deserve and simultaneously shown disrespect by the very government that utilizes their intimidation role; they’re hung with all manner of useless riot gear, they advertise their services as if they’re gods, we’re all meant to bow down and thank and worship every time their shadow passes over our pathetic non-military selves. As Rachel Maddow observes in her excellent book Drift: The Unmooring of American Military Power (2013), America has become a nation at peace with perpetual war, and with every aspect of civil society accepting the drift towards a military-based society.

So I doubt THE DIRTY DOZEN could be made again with the same efficacy. Movies like the Iraq-based THREE KINGS (1999) and Tarantino’s INGLOURIOUS BASTERDS (2009) have tried to recapture that ragtag dynamic of a military team on an adventure, but war is not as breezy a topic as it was; these dynamics have been transferred to fantasy films like THE A-TEAM (2010) and THE AVENGERS (2012), where each protagonist has a different power to offer the team; all trying to recapture that DOZEN flavor and missing the mark (while hitting new ones).