You’ve got to ask yourself one question: ‘Do I feel lucky?’ Well, do ya, punk?
— Harry Callahan, DIRTY HARRY.

And a screen icon is scarred onto the face of filmdom. And the Earth is once again salted with the man-nectar of masculinity.

DIRTY HARRY is about a cop who takes the law into his own hands. That’s the simple synopsis. But the cultural impact of this film and Clint Eastwood’s most enduring character is indescribable.

Beyond the art of movies, beyond the rubric of cops and robbers, beyond the playground where good and evil frolic hand in hand, “Dirty Harry” has entered the lexicon as shorthand for righteous brutality, masculine justice, and not taking shit; the film DIRTY HARRY spawned innumerable “loose cannon” cop films (which was a misapprehension of its actual theme), a more disturbing level of violence in movies and a new psychopathic angle on that violence; DIRTY HARRY took the anti-authority hippie stance of the 60s to the next level of societal angst in the newly-minted ’70s.

Amidst the furor over an unwinnable war (times just don’t change, do they?) American aggression found catharsis in DIRTY HARRY. Simplistically, the movie advocates violence against those who spawn violence (two wrongs making a right), seemingly advocating personal vigilantism over the dinosaurian “justice system”; yet the real message was too subtle for American audiences, who prove themselves time and again too blunt to comprehend subtlety. As Clint himself espouses, “It’s not about a man who stands for violence. It’s about a man who can’t understand society tolerating violence.” 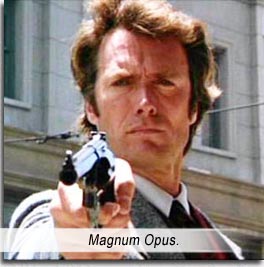 And Clint Eastwood should know. He IS Dirty Harry.

In a role intended for Sinatra (who would have merely filed it with his cavalcade of roles as arrogant guys with tilted hats) Eastwood owned Detective Harry Callahan like Sinatra owned My Way.

After we meet alpha male Harry as an edgy maverick San Francisco cop who “doesn’t play any favorites! Harry hates everybody: Limeys, Micks, Hebes, Fat Dagos, Niggers, Honkies, Chinks, you name it,” he is teamed with a young Mexican Inspector, Chico (Reni Santoni) and soon on the trail of a psycho sniper killer, Scorpio (Andy Robinson, who would never again command a role so hallucinogenically ruthless and sassy).

The subtext is that Scorpio is Harry on the wrong side of the law (As Above, So Below; Demon est Deus Inversus, the devil is god inverted). He hates minorities too and demands a ransom from the city of San Francisco in return for not shooting a homosexual or a catholic priest (nowadays that’s the same thing). In a plotline that predates Jack Bauer’s “ticking clock” scenario, Scorpio buries a young girl alive and Harry must find her before her oxygen runs out – and resorts to torture, Dick Cheney style (while in real life, Cheney was skulking the halls of the White House as a Nixon aide, probably taking notes when Harry steps on Scorpio’s wounded leg to make him talk…).

There are the authority figures stultifying Harry’s methods, then castigating him with legal technicalities when he gets the job done (John Vernon as the Mayor and Josef Sommer as the D.A.). And there is the first pairing of Eastwood with the ever-frazzled Harry Guardino as his Lieutenant.

Reviewer Pauline Kael finds in DIRTY HARRY “the fairytale appeal of fascist medievalism.” And author Richard Schickel defines that moment a star becomes a superstar – the scene that establishes why Harry is Dirty, shooting down bank robbers while still chewing a hot dog.

From a diner, Harry spies a car idling outside a bank. Not wanting to interrupt his break, he instructs the chef to call in a robbery in progress. As Harry takes the first bite of his hot dog, alarms start clamoring, and he resignedly drops the dog and exits the diner, still chewing on the bite. And drawing his big, big gun. He sees an armed robber exiting the bank (Albert Popwell in the first of his four roles in Dirty Harry movies) and yells, “Halt!” mid-chew. The robber fires on Harry; Harry fires back, sending the robber sprawling. The getaway car careens at Harry, who calmly takes aim and shoots it, sending it crashing into a fire hydrant, which jets water like a carnival.

And now, the pièce de résistance: Harry saunters to the downed robber – still chewing – and calmly points his gun at him, the robber looking tentatively at his own gun on the ground, inches from him. And Harry speaks, sardonically, amused:

I know what you’re thinking. ‘Did he fire six shots or only five?’ Well, to tell you the truth, in all this excitement I kind of lost track myself. But being as this is a .44 Magnum, the most powerful handgun in the world, and would blow your head clean off, you’ve got to ask yourself one question: ‘Do I feel lucky?’ Well, do ya, punk?

The milk of Legend.

The robber declines the challenge, yet when Harry turns to walk away, the robber beseeches him, “Hey!… I gots to know.” The milk of hilarity. By now Harry has morphed into a composite of Clint/Harry, as he smugly points his Magnum at the flinching robber – and pulls the trigger! Click! Empty barrels! Harry smiles that Eastwood smile and saunters away.

By now we are overdosing on Legend…

While his mythos as a laconic avenger was birthed with Leone’s DOLLAR trilogy, the DIRTY HARRY movies rounded out this more “modern” Clint. And if Leone was responsible for carving Clint into Legend, the director of this cinematic juggernaut was the other man who “made” Eastwood: Don Siegel. (Credit also to the writers, who put those tasty words in Harry’s mouth: Harry Julian Fink, Rita M. Fink, Dean Riesner, John Milius, Jo Heims.) 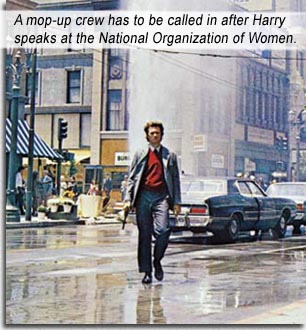 Alfred Hitchcock gets so much credit for that scene in DIAL M FOR MURDER, where we see the gleam of the scissors before the stab, but let’s give a little sugar to Siegel: as we see Scorpio tumble down a hill with a knife in his thigh, on the final tumble, the knifed leg cartwheels upwards giving a shattering view of the knife sticking out of it. And there are the magnificent Don Siegel camera pullbacks, which Clint would incorporate into his own directorial style. Usually used at the end of movies, to encompass the larger canvas where the story played out, Siegel gives us one of these pullbacks midway, as Harry steps on Scorpio’s thigh in the middle of a football field. Two lone figures – pullback – a bare, floodlit field – pullback – even the field fades into the black night amidst Scorpio’s screams.

Harry’s superiors hit the roof, “Where does it say you’ve got the right to kick down doors, torture suspects, deny medical attention and legal counsel?” (Does he think he’s Dick Cheney or something? Hmm, Dirty Dick. How would that wash?) Harry simply keeps his cool and makes a snide comment before he exits every scene. Was this where the snide exit-stinger was invented?

The finale is the cement that hardens the Legend. Harry points his Magnum at Scorpio, who is shielding himself with a boy. In a classic callback, Harry recites the same monolog he gave to the bank robber – but this time the tone is taut disdain, a mocking death knell for the person whom it is addressed to. And the funny thing is: during Harry’s first speech, he is out of ammo, during his second, he has one bullet left – yet the circumstances make him a winner both times.

DIRTY HARRY is sometimes considered a treatise on the moral ambiguity of the American justice system, or the moral ambiguity of those within it. Which is exactly wrong! Firstly, “justice” has nothing to do with the law. The so-called “American justice system” is a euphemism for the convoluted revenue-collection machinery of federal and state law. As for the erroneous view that Harry Callahan is morally ambiguous because he chooses to go against the letter of the law, well, his actions only prove that he is the only person in the movie with a moral compass, adrift in an amoral sea of red-tape junkies. Like all of us, he has an innate understanding of right and wrong, and shows it – in a job where it is discouraged.

Harry’s innate sense of principles make him overqualified to be a police detective, but because he is this film’s anti-hero, we erroneously start believing all cops possess such a moral compass, when we should be aware that real life cops are never allowed any such discernment, being mere apprehenders or indirect revenue-collection cogs.

In Clint’s Magnum opus we know that Harry Callahan stands for what is truly right – over and above any written law cravenly passed by sniveling old rich white guys who rape justice in the ass. We identify with Harry Callahan because we ALL know what’s really wrong and really right. When you yourself come up against morally ambiguous situations in life, you don’t refer to those pasty old guys out of touch with real life, you look to someone like Harry Callahan to guide you. And you gotta ask yourself a question, “Do you feel Dirty?”

Lalo Schifrin: The Music Behind The Man’s Man.
Composer Lalo Schifrin was – ahem – instrumental in creating Clint’s ice-cool persona, composing the groovy soundtracks for many of his early starring movies (COOGAN’S BLUFF, THE BEGUILED), then went on to compose four of the five Dirty Harry movies (excluding THE ENFORCER, Jerry Fielding). DIRTY HARRY was not just hip – it was cutting edge hep, with a soundtrack resembling Deep Purple’s Concerto for Group and Orchestra meets a choir from the Third Circle of Hell. You’ve heard it slinking and jiving under Harry’s escapades, carving the movie’s identity while you stared wondrously shocked at cinema’s rawest avenger, but you’ve never heard it like this: