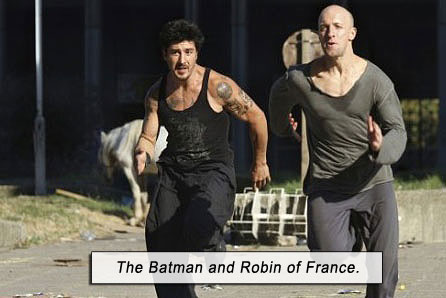 Paris is burning. And only Parkour can save it.

DISTRICT 13: ULTIMATUM is the high octane sequel to the atomic blast of DISTRICT 13 (2004). Like its predecessor, a guilty pleasure, full of the same running and jumping and skipping and flower arranging.

At the conclusion of DISTRICT 13, undercover cop Damien (Cyril Raffaelli) united with ex-crim Leito (David Belle), and Leito reunited with his hostage sister; Damien and Leito made peace with the crime lord’s thugs, the corrupt government was brought down on national TV and the new government promised to tear down the walls separating the crime-ridden Districts from the city of Paris. And they all lived happily ever aft– [needle scratch]

In this bromantic-fisted actioner, Damien and Leito reunite to take down the secret government police who are trying to demolish District 13 for a fat payday.

Patrick Alessandrin directs, retaining the surefooted verve of Pierre Morel (DISTRICT 13), and Luc Besson once again pens the convoluted plot: the head of the secret police, Gassman (Daniel Duval) brews dissension in District 13 by setting up the deaths of two cops, to force the president’s hand (Philippe Torreton) to wipe out the District and rebuild a modern city. Gassman is being paid off by the rebuilding contractor. (Hilariously, the contractor company is called – get this – Harriburton! Now if this was China, that would be a snide pronunciation gag and a wink to Cheney’s unethical no-bid contractors Halliburton, but since it’s France, I don’t really know whether it’s homage, satire or just one of those buttery French names badly translated.)

Therefore, the man empowered to investigate the conspiracy – Gassman – is the man responsible for it, and also the man who stands to make a fortune by hiring his own contractors. Hang on, are we talking about Dick Cheney again?…

It is three years since the events in DISTRICT 13, and ULTIMATUM opens with sweeping shots of the District’s decay: gangs, guns, drugs, dog-fighting, and lots and lots of hardguys with tattoos.

We meet Leito taking it upon himself to demolish the wall, section by section. His gang leader friend regards the wall as a fortress protecting them from the outside world. Which in France means it’s protecting them from beepy fuel-efficient cars, leggy French models and buttery croissants. “Better to be king here than a butthole over there.”

We meet Damien undercover as a hooker with a great arse. Undercover like a slut, seducing a slew of dope buyers and capturing them and their dealer Mr. Woo (homage to John?). At one point, he fights while holding a €200 million Van Gogh “one scratch and its worthless,” so the battle becomes very, very funny a la Jackie Chan, as he manipulates the painting around the fight (or the fight around the painting). Throughout movie, this tone of battle underscored by humor keeps it enjoyably light. 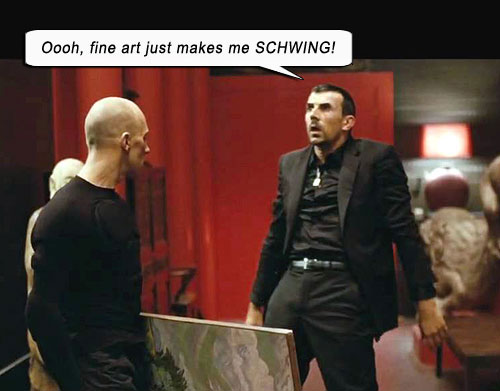 Once again lots of hand-to-hand creative combat – because somehow people keep forgetting they have guns. Or suffer from the Boba Fett Syndrome (i.e. have a gun, but move to within striking distance to use it, whereupon gets bitchbeaten). The absolute stupidest fight (for which I eventually threw up my hands and fell out of the movie) was when the Cambodian bitch kills four army guys who are completely outfitted butt to bonehead in camo and utility belts; and in all those little compartments on their wanky body-armor they couldn’t find one weapon they could use from a distance instead of engaging her in hand-to-hand? And after she kills the first three with that blade in her hair, you’d think the fourth ineffectual military gimp would learn a lesson, but no – walk straight into that swinging blade like a blithering sheep.

I read a review opining Belle and Raffaelli make Jackie Chan look like he’s standing still. Not exactly true: Chan in his halcyon days was much faster than these two and his cameras were slightly steadier to capture all that superfast action. Whereas the impact of DISTRICT 13’s fight scenes have as much to do with the director and editor as the choreographers and actors; cutting many actions three times from different angles, crashing to slomo and back again to real time, putting much more post-production “motion” into the action than Chan’s producers.

Gassman’s right-hand hardguy Roland (Pierre-Marie Mosconi) tries to kill Damien throughout the movie by not killing him. Too much Bond-movie influence? First, he arrests Damien and locks him in jail; when Damien escapes, Roland’s men try to shoot him from far away but as soon as they get up close – hand-to-hand for glory; then when Roland has a gun on Damien, his most efficient method of killing Damien is to apparently get kicked in the nuts by him.

Gassman is after the video that exposes the conspiracy, so the rebels pass it to Leito to Run Away with it! Cue Parkour. Run away! Run away! The free-running is not as prominent as it was in DISTRICT 13; more of a diffuse mind-set, woven into the fabric of the action. Of course, you can’t be a true hero if you’re just good at Running Away. So Leito is given some dynamic combat scenes, kicking ass and taking buttery French names. 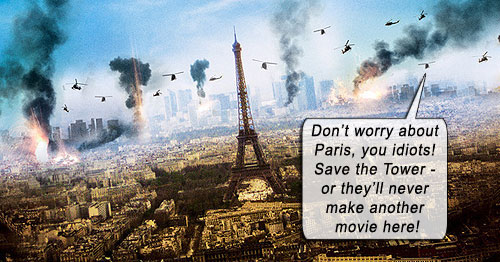 An audacious plotline as the District’s five gangs are recruited by cop Damien to storm downtown Paris and stop the government cops blasting the District to hell. But here’s the strange twist: What the government is doing is, in one sense, ridding Paris of its worst crime, albeit by extreme means. Despite Gassman profiteering from the erection of modern skyscrapers, the plan itself will create jobs, renew the city and bring in revenue! The fact that Gassman started the process by murdering police is irrelevant. His intent is purely business. The president argues that France’s democracy is based on Liberty, Equality, Fraternity – that those ideals would be quashed by demolishing District 13. But the gangs who just overran his presidential office displayed their own liberty, equality and fraternity…

Thus, what the president actually does with the rockets aimed at the District – at the behest of the crime lords and Leito and Damien – is a surprisingly ironic resolution.

When the gangs take over the cities, pray they’re as honest as the crime lords from DISTRICT 13.