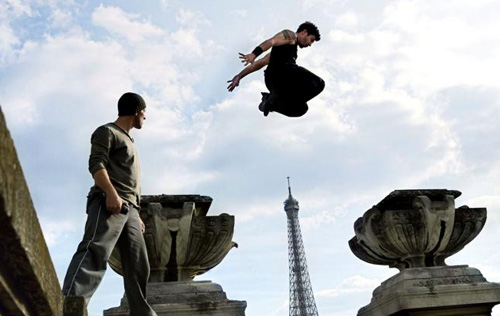 Jackie Chan and THE TRANSPORTER had an ADHD baby that spoke French. And it was called DISTRICT 13.

An ex-crim and an undercover cop team up to go deep into the bowels of a toxic, walled-off district to retrieve a neutron bomb from the local crime lord, who is aiming it at Paris.

Paris 2010 -The Future (don’t argue, just grin and go wash your flying car) – and crime has spiraled out of control, forcing the government to erect unbreachable walls around the worst ghettoes (Districts), where a lawless social system coalesces, run by crime lords.

In District 13, we meet do-gooder Leito (David Belle) in an ongoing battle with the local boss Taha (Bibi Naceri, also the film’s co-writer) and the corrupt police. Outside the District, we meet undercover supercop Damien Tomaso (Cyril Raffaelli), jet-chopping his way through a gang led by a guy who looks like Gene Simmons with a Ben Franklin hairdo.

When Taha gets his hands on a neutron bomb, the French government sends Damien, their best man, to infiltrate District 13, and with the help of Leito on the inside, to retrieve and defuse the bomb. 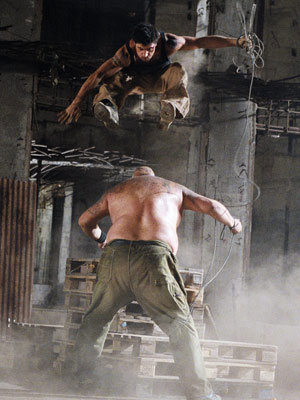 The bigger they are… the Parkour they fall…

DISTRICT 13 (aka BANLIEUE 13) is hardly about plot or acting or subtlety. It is created solely to explode at the seams in sweat-drenched tracksuit pants. Written by Luc Besson (with all the Besson trademarks – audacious plot, powerful females, heart-fibrillating action), it rages like a speeding bullet, so fast we just barely have time to pull apart the plotholes. It is director Pierre Morel‘s debut feature, and he has noted well the techniques of his hard-action predecessors (Guy Ritchie, Danny Boyle, John Woo) and studied meticulously GOLDENEYE and RUSH HOUR and UNDER SIEGE – and leaped them all with unique, dynamically-crafted gutshock action sequences specifically designed to make you piss your pants before you even get to the edge of your seat…

The film takes risks, not just with its unseasoned director, but by basing an action film’s stunts around a relatively new discipline – free running aka Parkour. Hiring David Belle for the lead role was another leap of faith, so to speak. As the pioneer who “invented” Parkour, sure Belle could make a good stunt consultant – but could he act? Well, kinda. So his Basic Concerned Faces and Angry Glares will do, as his free-running talent is startling enough to jolt this film into a unique stratosphere, cos that’s really him hoofing it over those battered rooftops and razorwire streets, being chased down by thugs and evading and beating on them creatively, using the angles of his environment as his obstacles and weapons. And Morel captures the panther fluidity and inimitable jetstream of Belle’s incredible innovation.

It really is a “new” chase dynamic we are witnessing. (Two years later, James Bond’s CASINO ROYALE would open with a similarly dynamic foot chase, with one of Belle’s contemporaries, Sebastien Foucan.) Although, let’s face it, all the chase scenes and fight scenes in DISTRICT 13 – whether they be on foot or in cars – are predicated on the discrepancy that all the thugs have forgotten they are carrying guns… and if they do think to use them, we realize they’re all graduates of Stormtrooper Training School for Shooting Aimlessly; also, bullets are apparently easily dodged by running in slow motion.

Raffaelli as cop Damien is no slouch in “new” combat dynamism – stunt coordinator and fight choreographer (THE INCREDIBLE HULK, TRANSPORTER 2) – fit as an Olympian and smooth as cyanide buttah, his grabsplatter moves are also an inspiration to muttonheads to get off the couch and do a situp. There is a chemistry between the two leading men, Belle and Raffaelli, but it isn’t achieved through great acting – they are both just so physically proficient at what they do, there cannot help but be some muscled man-love flowing in the gaps between beating down bad guys who can’t aim…

The thugs, led by Taha’s right-hand blimp K2 (Tony D’Amario), kidnap Lieto’s sister Lola (spirited Dany Verissimo-Petit) to coax Leito out of hiding. Like all Besson’s female characters, she’s a firecracker, who doesn’t take shit even whilst being pawed and wolf-whistled by an army of thugs. She can handle a gun, and she’s the driver of the getaway car when Lieto rescues her. Even when she is chained to a bomb later, she is doing all she can to prevent it, not just weeping like some American damsel in distress. European films always have better-drawn female characters that don’t come off as masculine, lesbo or bitchy to be strong. (Although I think that shoving her panties into the mouth of one of the thugs who leered at her that he “would like to eat her panties” is not exactly a punishment – even if she did do it with a gun to his head. Which probably made it hotter for the thug. Girls, you can’t win…)

Taha aims a rocket at – you guessed it – the Eiffel Tower, for ransom. In a swifty move, Damien gains Taha’s offshore bank codes and drains his accounts. Now, usually when a crime boss’s accounts are drained, their henchmen continue doing their bidding – but here is a cool, very human reaction, “If you have no money, how are you going to pay us?” Uh-oh, time for a retirement party with bullets. 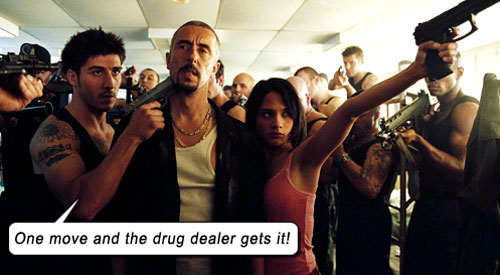 There may be no schools in the Districts, no hospitals, no police force, but damn they got BITCHIN’ cars! Obviously no shortage of mechanics.

As to those plot holes: why are all Taha’s thugs firing madly on the car that he is being held hostage in? Your boss is in there, dopes! I also want to ask: Why are cops guarding the entrance to District 13? Who’s trying to break into the crime-infested ghetto? And if you are so criminally-minded that you want to traverse the boundary between normal society and sinful society, then the cops should embrace your exit, as it gets you out of their law-abiding abode voluntarily! So Damien’s trying to get in with a bruiser car and a bad attitude – but why are the cops blocking him? Shouldn’t they be more concerned with the crime element trying to break out? And that whole issue of the bomb being on a 24-hour timer – and the defusing/activation of it –  makes no sense at all, but you’ll have to unspool that comedy when it kicks you in the chest. These movie politicians thought through their idiotic plot about as efficiently as real life politicians.

Jason Bourne and John McClane aren’t the only guys who play rough any more; the new kids in the district play rougher.