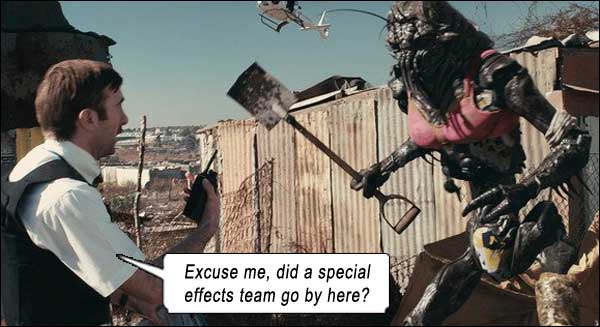 It lacks the epic majesty of 2001: A SPACE ODYSSEY, the wonderment of CLOSE ENCOUNTERS, the cloying fear of ALIEN, the scientific ineptitude of STAR WARS, it even lacks the funny masks of STAR TREK. But – like 2001, CLOSE ENCOUNTERS, ALIEN, STAR WARS and STAR TREK – DISTRICT 9 is revolutionary!

Be careful with that alien weapon, Eugene!

All extraterrestrial alien movies must now bow down before DISTRICT 9.Like the deformed child of a documentary and a reality show; a psychodrama with a tongue-in-ass-cheek sense of black humor. No world domination or alien armies, no mighty deathships or hyperspace star streams, no cantina scenes or darth Cheneys – just a real world grit and bureaucratic spit, coupled with themes of loyalty, familial bonds (and lack thereof) and racial allegory that holds up a ruthless mirror to mankind’s black soul. Much like BRÜNO, only totally Not Gay.

They arrived 20 years ago in their broken spaceship. And just hung in the sky, unthreatening, unknown, un-Spielberg. Luckily, they didn’t break down over the country with the biggest percentage of closed minds per boob job – America. But even over Johannesburg, South Africa, livid with the unlearned lessons of apartheid, they became pariahs. The government rescued these one million malnourished, harmless, “worker class” aliens from their own ship and overcrowded them into a Johannesburg shanty town called District 9.

Squalor, crime, interspecies prostitution and black market arms deals between the aliens and Nigerian gangs prompt Johannesburgers to demand “apart-hood” from the aliens.

Wikus storms District 9 with bogus “eviction forms,” like Orwell’s Thoughtpolice by way of Ricky Gervais, as we try to figure whether this is high comedy or uncomfortable racism. It is both.

Bigots call the aliens “prawns” for their crustacean-like faces, and the unflappably jaunty Wikus seems to be the biggest bigot of all, as he orders the burning of a shack brimming with alien eggs, telling jokes about the baby prawns inside bursting like popcorn as they’re trying to escape.

Director and co-writer Neill Blomkamp has assembled a cast of brilliant unknowns, and forged a movie of veteran quality, creatively lensing the story’s development through security cam and surveillance formats and news footage; aided by producer and fantasy god-king, Peter Jackson (LORD OF THE RINGS, KING KONG 2005).

It can now be said that Jackson’s special effects company, Weta Digital, blows every other effects house back to the age of Pong – this goes for prominent A-Listers like ILM (STAR WARS), Sony Imageworks (SPIDER-MAN), Giant (INCREDIBLE HULK). In DISTRICT 9, we never doubt the veracity of the city-sized spaceship hanging in the sky, the thousands of aliens in full daylight, the 3D holograms, the weaponry…

Alien weapons (which the aliens trade for catfood and hookers) is attuned to alien DNA, so humans cannot use them, which of course, the humans try to do, by mutilating aliens in MNU underground labs in attempts to combine their DNA with humans. (The analogies with Nazis’ human experiments are not lost.) While in DISTRICT 9, the Nigerian gang leader (on advice of his witch doctor) eats fresh aliens for the same purpose.

Wikus unwillingly becomes the most wanted man amongst the aliens, the Nigerian gangs and the MNU, when a vial of alien fluid accidentally spurts in his face… Flashbacks to THE FLY, as his fingernails and teeth gradually fall out, nubs of exoskeleton poking through his flesh… alien DNA combining with his…

And an alien that Wikus was terrorizing, named “Christopher Johnson” (wearing a red vest, so I shall call him Red Vest, rather than use his slave name), and his smart little alien son, become unbidden allies to Wikus.

In any alien film, language is the credibility downfall. Here, both parties have learned the basics of each other’s speech, but since their throats are constructed differently, do not try to imitate each other, speaking fluently and authentically, picking up snatches of concepts.

Even when DISTRICT 9 tips into “blockbuster” and suffers a TRANSFORMERS moment (when Wikus is inside a giant CGI exoskeleton), the reason for him being inside the robot suit is to save Red Vest to reunite him with his son. Amidst the hail of gunfire from muttonhead military drogues led by a vindictive officer (David James), poignancy blossoms as Wikus almost tenderly (yet with firepower to stop tanks) tells Red Vest, “Let’s get you to your son.”

And the efx never take over as Blomkamp maintains Wikus’s presence inside the suit with razor sharp direction. And by the way, don’t humans know by now that regular bullets can’t harm alien robot suits? 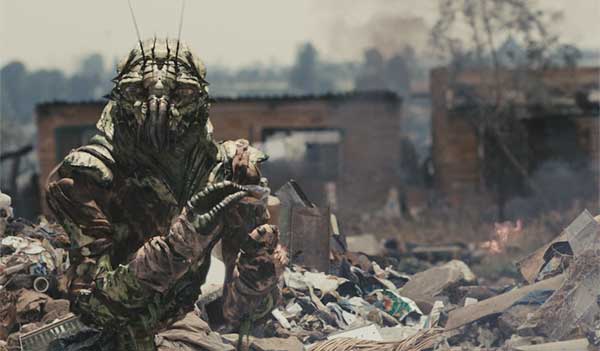 Yes, aliens do exist. And they are just as filthy as humans.

DISTRICT 9 is ultimately a Grande Tragedie, as Wikus transforms into that which he despised, taking “seeing things through another’s skin” to a whole ‘nother level. But a tragedy from whose point of view? Well, he can’t tap his smokin’ wife again (delectable Vanessa Haywood), so we relate to that kind of tragic; and Red Vest promised a cure in three years, so there’s another blow. Yet if humans were able to transform into another’s skin completely like this, maybe they would be less inhumane. Yeh, maybe.

Laden with these metaphors and allegories, DISTRICT 9’s stylish brutality may in fact distract from its message: it doesn’t take extraterrestrial aliens to bring out the barbarism and racism in humans. Any nominally alien race will do. And has done for millennia.

Humans were no less brutal in 1948 when apartheid laws were institutionalized; were no less inhumane when burning Jews in 1944 (and probably laughing as internal organs burst with popcorn sounds); were no less single-minded in their brainwashed murder when eradicating Iraqis in George W. Bush’s “holy crusades” undertaken by Xe (nee Blackwater) in 2006…

DISTRICT 9’s overt violence is a sign of censorship laws becoming more lenient, not human nature becoming more vicious. Humans have always been this vicious.

Back in 1945, John Wayne was making war movies where bullets made no exit wounds, so people did not become inured to violence the way we are in 2009. Thus, at the Nuremberg trials of 1945, people were righteously outraged at war atrocities, punishing Nazi soldiers and officers with life imprisonment or death, whereas in 2009, the EXACT SAME CRIMES committed by the Ku Bush Klan go not only unpunished, but ignored and satirized, crowed over in legacy-rewriting interviews by the murderous criminals themselves.

Now DISTRICT 9 portrays powerful alien weapons pulping bodies so savagely that scraps of flesh usually smear the camera, putting us right amongst the action. Yet we take the openly-bestial nature of humanity in stride, just as we let war-criminals with the blood of millions on their hands stalk free without any liability.

So it was then, so it is now, so shall it always be: When worlds collide in DISTRICT 9, the beings displaying the most inhumanity – are the humans.