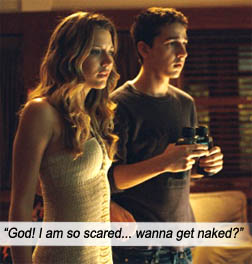 Doing time on house arrest, Kale (LeBeouf) eventually turns his bored, binocular perving on the suburban neighborhood to the new hot neighbor (Sarah Roemer), then notices his other neighbor (David Morse) is behaving suspiciously like a character in a suspense thriller.

Playing spaz buddies for all they’re worth, Kale and Ronnie (Aaron Yoo, who looks like he’s on break from a Tommy Hilfiger shoot) stake out the creepy dude (while perving on the hot chick during breaks).

One Meet Cute later, Hot Chick teams with Dweeb and Spaz to unravel the dark secrets of the Creepy Guy Next Door.

Watch it with binoculars for maximum Teen Model effect.