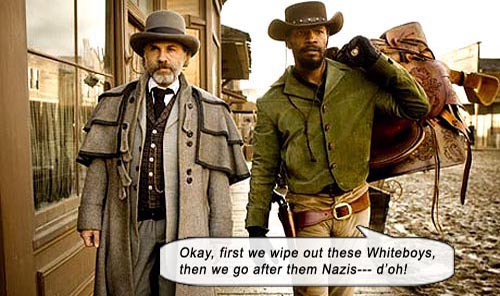 Once Upon a Black Time in the White West.

Quentin Tarantino, as he did with INGLOURIOUS BASTERDS (2009), once again punches history in the face and rewrites the underdog as the alpha dog in DJANGO UNCHAINED. And says nigger a lot.

DJANGO UNCHAINED throws that word at us in such forceful abandon that it becomes hilarious to hear from the mouths of rednecks and high society alike; a grim reminder of the times (1858, two years before the American Civil War), when even the educated elite were conditioned to call African slaves niggers, not as pejorative or juvenile display of superiority, but as reference.

As with all Tarantino films, the movie MAKING sells it, not so much the simple buddy/road-movie plot, which is once again littered with audacious coincidences and maddeningly convenient plot points. Tarantino’s signature compelling vignettes still litter the celluloid, the hip dialogue as ferocious as the bullet-fests, yet of all Tarantino’s oeuvre, DJANGO stands apart as arguably his first film that can neatly be sliced into three acts.

The acts are split into comedy, drama and violence. First act finds Django and King bonding on bounty kills, second act is the Long Con, and third act is all Foxx, hero angles, hero bloodshed, and hero slomo.

Act I, we meet heavily-drawling Don Johnson as plantation owner Big Daddy, replete with Colonel Sanders goatee, imperious white suit and finger-lickin’ necktie; Django posing as a “free man,” the plantation slaves so inculcated in perceiving black men as slaves that Big Daddy must instruct them on how to treat Django – “like a white man” – which flabbergasts them; and a wildly-miscast Jonah Hill, arguing with fellow Klan members over the eye-holes in their hoods being constrictive to their vision, like a Python sketch.

Act II is the Long Con, the most intense psychodrama sequence, where Tarantino sets up his beautiful dangerous tableaus: Django posing as a black slave trader (“lower than a house nigger”), he and King masquerading to Kandie as business partners seeking new talent for “mandingo fighting,” a whitey bloodsport pitting black against black to the death (broken arms, hammers to the head and other such whimsy). They attempt to buy Django’s wife from Kandie, on the pretense they would be investing thousands more buying mandingoes. When the ruse is uncovered – by the lowly “house nigger” – and Kandie brings out his father’s skull, we just know we’re in for some sweet Tarantino mindfuck dialoguing. And who is the house nigger? None other than Samuel L. Jackson; a wonder how he pulls off a role alternately so funny and so slimy. 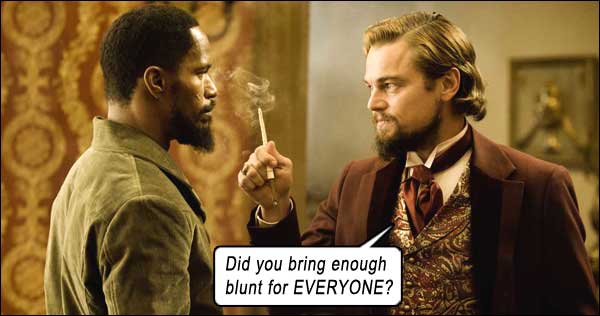 Second act wraps with wild gunfire, dodging impossible hails of bullets, gouts of blood spurting in bucketfuls, each death an art statement, human entrails exploding in fiery red fountains… It’s classic Tarantino by way of Sam Peckinpah and early John Woo, with better technology, ergo better gratuitous gore. That’s why we love him. We also love Tarantino for his brazen deus ex machinae  that always seem as natural as spitting blood after being shot in the lung. But in DJANGO, for the first time – Tarantino fails to make it seem natural…

It is in these impossibly tense Kandie sequences that all Tarantino’s storytelling errors are made: firstly, King could have avoided Kandie’s revenge with one simple lie (bedding Broomhilda); secondly, King is outfitted with guns hidden up his forearms (TAXI-DRIVER-style) and opts not to go out blazing; thirdly, Django is saved at the annoyingly last minute by the person who hates him most, the house nigger. And he is sent on a cross-country trek with infinite opportunities to escape, like a 1960’s Batman episode. A jaw-dropping display of lazy screenwriting.

In BASTERDS, Waltz played someone so demonic, his every innocuous gesture contained menace, his every courteous word laced with arsenic and occluded intent. In DJANGO, Waltz is still lucid, ruthless, merciless (and it’s incongruously hilarious hearing him say nigger in that Germanic brogue) – but this time, he’s on our side. Here, Leo is The Christoph Waltz, teetering on a tightrope of volcanic eruption and insatiable violence, his beatific smile masking a sociopathic nihilism. And boy does he love saying nigger. Walton Goggins is a crazy-eyed Kandie ranch-hand (the guy you call when Steve Buscemi is unavailable) and the most comfortable having nigger in his redneck vernacular. But the movie is Foxx’s, to have and to hold. And he’s the only one who can say nigger with any conviction and impunity.

Act III is Jamie Foxx Unchained. Who would’ve thought Wanda would end up such a big brutal star?

On his trek to the Batman prison (minded by Tarantino in a jailer cameo with an atrocious Australian accent), Django, in his overbearing confidence, spins a tale to free himself, spitting at his dubious captors, “Do I talk like a slave?” An excellent line, reminding us that though most slaves must have been cowed into obeisance, there must have been men among them who yet held their heads high enough to rise above the physical and psychological cowing of Whitey, otherwise Lincoln and his cronies would never have thought it morally reprehensible to keep these men captive.

UNCHAINED is another Tarantino thunderball. Though based in an historical period, it unapologetically blazes outside the arc of history. Its lead character is an anomaly – Django is not just a rebel slave, he doesn’t even consider himself an underdog. It is not in his vernacular; he holds an intrinsic belief that he *is* superior to his captors, an aspect that was literally beaten and bred out of generations of Africans.

Tarantino had to field a slew of interviews to justify why his characters said nigger so much. (Why do you idiots focus on that one word? Is anyone hearing Waltz mention Alexandre Dumas to Leo, who coincidentally played THE MAN IN THE IRON MASK? Is anyone hearing the authentically Western soundtrack that contains numerous Ennio Morricone compositions, including themes from TWO MULES FOR SISTER SARA? Is anyone commending QT for alluding to Wagner’s Brünnhilde?) 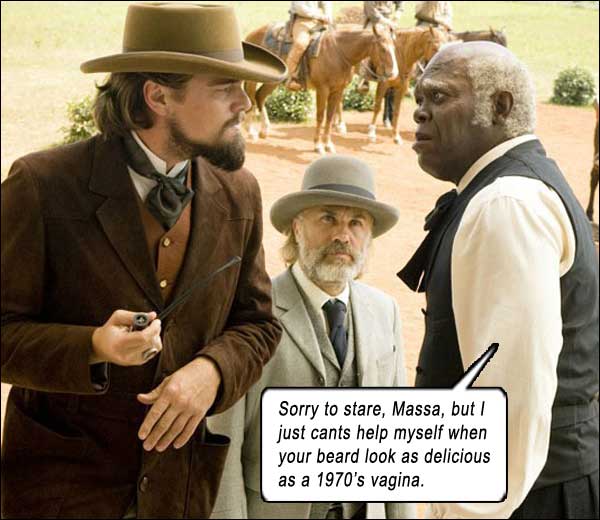 And here’s the thing: even though writer-director Tarantino set DJANGO during slavery and feels justified in sprinkling n-words like glitter, the tale of the unbound slave-turned-bounty hunter is hyper-realism – it’s not meant to be a documentary or authentic representation of the era – so Tarantino could have opted to be more niggardly with the “niggers.” But – as we discovered in PULP FICTION – QT just loooves dropping that bomb… I think it’s a case of just liking the way the word sounds, like “fuck.”

Like fuck, it drops like a ball-peen hammer every time you hear it. It never gets old and it never wears thin. Like fuck, it is all-purpose, can be used in any context, to friend or foe, to black or white, for stop or go. Could it be that modern Whitey guilt just doesn’t like admitting how blasé and passe the derogation was back then? That, just like rewriting “Mark Twain” and Republicans’ disavowal of slavery, they don’t want such a harsh light shone on their past cowardly White-nited States of America?

Once again, the purveyors of the message are attacked, instead of the message being heard. When I state that the Pope and his cronies fuck boys, it’s me who gets vilified for saying “fuck.” (What would you prefer I say – making love?) Do you critics think the actual crime/sin of fucking boys can be overlooked simply because you turn your hypocritical derision to the people who are calling it what it is?