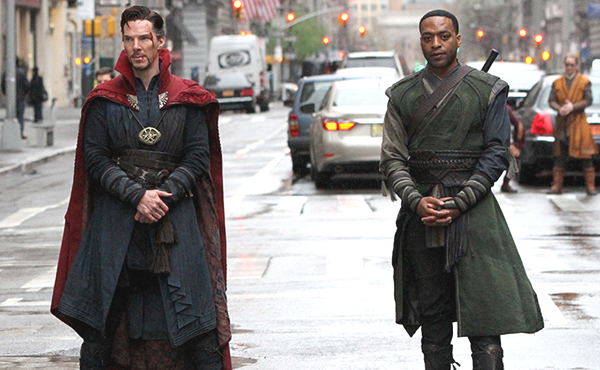 That awkward moment when you meet your friend at a secret cosplay meeting.

If you like architectural special effects, DOCTOR STRANGE is the movie for YOU. Having purchased the building-bending app from INCEPTION, director Scott Derrickson plugs it in and goes on a two-hour coffee break while skyscrapers fold on top of one another, streets turn into Rubik’s cubes, and right angles become three-dimensional Escher-esque imbroglios. Then he emails the zip file to Marvel Comics and collects his paycheck.

It’s magic. No rules. Fuck you. Any wonder I never read any Doctor Strange comics as a sensible teen.

Benedict Cumberbatch is Dr. Stephen Strange, a brilliant neurosurgeon who loses the use of his hands after a car crash, when they shake uncontrollably after being reconstructed. Before you feel any sorrow for our antagonist/hero – he crashed because, while driving like an asshole in his supercharged current-model phallic status-mobile, he was scanning x-rays, hubristically declining patients that were not “worth his time.” He chose his watch that night from a drawer full of expensive watches, each spinning in its own tiny display case! And his estranged lover is doctor Rachel McAdams, who reconciles with him when she sees how his teleportation skillz make her underpants so wet. Still feeling sorry for this elitist dick?

Hearing about a process that might cure him, and desperate to become the raging dickwad he was before the accident, Strange goes on a sabbatical to Kathmandu, where he meets The Ancient One (Tilda Swinton, smugly shaved-headed) and her helper elf Mordo (Chiwetel Ejiofor), beseeching them to make his hands steady so that he might once again join the privileged few who have a spinning watch rack.

Upon picking up Magic really fast, Strange does something which illustrates the overarching stupidity of Magic – he “steals” books from the Magic library (guarded by Benedict Wong) by using a teleporting device, where only his hands shoot out from a circle of teleportation, grab the book and then disappear back into the circle without Wong being the wiser. Hark back to the opening scene, where we saw the villain Kaecilius (Mads Mikkelsen) launch a full frontal attack on this Magic library, with henchmen and magic knives and all sorts of bluster, to steal simply two pages from a book. But Strange shows us you can steal so much more efficiently with a teleporting circle – so why didn’t Big K do it that way? Mo’ explosions, mo’ box office. That first attack on the Magic library was the unnecessary spinning watch rack for the filmmakers.

However, it turns out Kaecilius (who must be stopped by the Ancient One and Strange and any other extras standing around with third-rate fighting ability) wants to use the pages to, uh, cast a spell so as to, uh, make magic and, uh, bring down, uh – What is the plot again, Marvel?!

It’s magic. No rules. Fuck you. 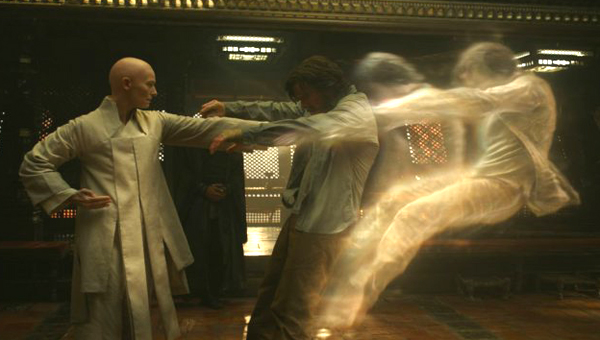 Ladies, three Cumberbatches for the price of one.

Kaecilius is trying to bring down Ancient Tilda because she’s using power from the dark dimension to stay alive. And Kaecilius doesn’t like people doing bad things, so he’s willing to kill a bunch of good wizards to prove he’s not bad. Royt. So though they can use static whips and invisible swords and defy gravity and walk across dimensions, the fate of all creation once again devolves to fisticuffs…

During a magic-fight, Strange is “chosen” by a “levitating cloak” which has its own personality. Then Kaecilius chases Strange and Mordo through intertwining dimensions of city streets and buildings, while M.C. Escher turns over in his grave and we contract a mild form of neuromuscular eye disease. Later, Strange would turn back time like Superman, but more nobly, because it wasn’t for the sake of Panty.

Kaecilius reveals the bad guy behind his bad guy – an evil supernatural force so overwhelming, it can only be represented by a lame special effect with vertical lines on its square black face, called – Dormammu!—

–wait! “Dormammu”? Such a cute name. Is that a fluffy panther or something? Maybe an ancient Aztec astronaut, or a legendary Earth spirit? Where have I heard that name before?… Turns out, I must have read some Doctor Strange comics in my misspent youth because that name is only from this canon.

Or maybe I picked it up from other Strange media. Like every other modern MCU property, Marvel’s maven of Magic has already been on the screen (in a 1978 TV movie, before superhero movies were a major entertainment cog, and in a 2007 animation feature). This DOCTOR STRANGE is set up to exist in the Marvel Cinematic Universe (“While heroes like the Avengers save the world from physical dangers, we sorcerers safeguard it against more mystical threats”) and comes at us with updated medical grit, a morally-ambiguous villain, and state-of-the-art production values that twists the universe – nay, multiverse – in on itself. Marvel have either done the good Doctor proud, or developed a new way to design proscenium arches. 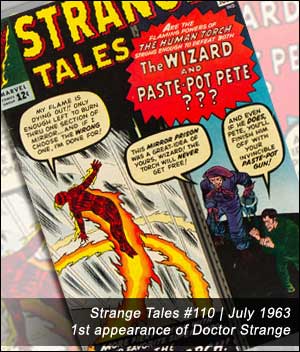