DODGEBALL grabs its nuts by the balls.

Ben Stiller‘s best roles have been the few that have almost burst his carotid artery through certifiably asinine overacting. (To date, that would only count MYSTERY MEN, ZOOLANDER, and cameos in ANCHORMAN and THE CABLE GUY – add DODGEBALL to that short list.)

His early 90s comedy series, THE BEN STILLER SHOW, though a fine showcase for his frenetic talents, was so underrated and misunderstood that it was actually cancelled first time outa the gate, only to be reinstated on Comedy Central at varying intervals. Unfortunately, in his gradual assimilation into feature film pap, his chunky monkey breadwinner is his Woody Allen Lite nebbish (YOUR FRIENDS AND NEIGHBORS, ALONG CAME POLLY, MEET THE PARENTS, et al; hell! – he even turned David Starsky into a neb!).

DOGDGEBALL is Stiller’s welcome return to artery-busting form, as the corporate gym owner, White Goodman – entrepreneurial, avaricious, bombastic Bad Guy to Vince Vaughn‘s somnolent Pete La Fleur, who mismanages his own failing gym across the way. White has designs on merging Pete’s fringe-dweller gym with his own commercial monster conglomerate and will go to any sweat-tainted lengths to corporately consume it. 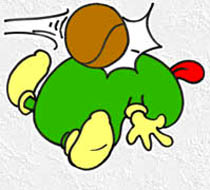 In this film fantasy where an independent, successful, sexy woman (Christine Taylor, Stiller’s real-life wife, playing Kate the auditor, whom everybody wants to examine “under the counter”), can fall for a shiftless itinerant like Pete La Fleur, it is no stretch to discover that the only way La Fleur can raise money to save his gym is to enter a Dodgeball tournament with a cadre of his willing (though untrained) gym patrons (that include: Alan Tudyk, who thinks he’s a pirate; Justin Long, who is a virgin; Stephen Root, who brings his Milton; and lanky dorky Joel David Moore). Due to the movie taking itself about as seriously as the inflated bulge in White Goodman’s jockstrap, we go along for the ride.

Hank Azaria and Rip Torn camp it up as young and old versions of legendary Dodgeballer, Patches O’Houlihan, whose methods of training La Fleur’s dysfunctional, ubergeek squad would give any man pause for scrotal reflection.

The tournament itself action-packs the last half hour of film, and climaxes with Pete and White facing off (- how’d you guess? You must be psychic!). During the game-play, director and writer, Rawson Marshall Thurber cannily transfers the volley of humor, which rested upon the main cast – who has now taken to the Dodgeball court – to the broadcast commentators, Cotton McKnight and Pepper Brooks (Gary Cole and Jason Bateman, hamming their roles with a vengeance and a copy of the Insensate Drivel Handbook).

Any movie artful enough to tweak audiences into investing their alliance in a misfit dodgeball team has more going for it than just hot chicks and scrotum jokes. Who outside of the sixth grade even knew this sport still existed in mankind’s repertoire? Anxiety churns my blood, for the internet can so easily resolve this mystery, yet I dare not make the connection, for I fear I will either discover a horror so demeaning that it will debase my already staggering lack of faith in humanity’s intelligence quotient, or – L. Ron Hubbard have mercy! – I may suddenly embrace the urge to squoze my scrote into a purple unitard and take one on the face for the team – and if that image doesn’t get your carotid artery throbbing, it’s already burst…