Lady and the Tramp.

Kids and animals. Now Chaplin has worked with both. 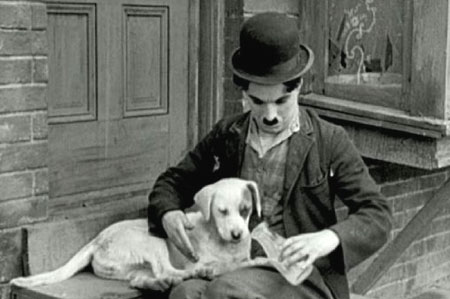 As always, a Chaplin film filled with milky, creamy goodness.

As the little dog lazes in a hideaway and tries to score sustenance, so too does Little Tramp (Chaplin). Just as packs of wild dogs attack the mutt (named Scraps), packs of wild dogs also attack Tramp – oops sorry, those are police attacking Tramp for vagrancy. Can anyone tell the difference? Is Chaplin comparing the cops to animals? I’m watching the same film you’re watching…

Tramp befriends Scraps And that’s about all there is to the metaphor. She’s just his pet for the duration of the short; no more bearing on plot or analogies. She does dig up a wallet stolen by a couple of thieves, which Tramp seizes as his own – until the real thieves thieve it back.

Tramp also befriends a men’s club “entertainer” (Edna Purviance), a woman who is terrorized by her boss to pull in more customers by winking and promising them clothed dances; Tramp will eventually waddle into the sunset with her.

DOG’S LIFE is considered a “short” by today’s standards (it is about 30 minutes long), but in Chaplin’s day, it was standard to release films this long (due to the industry finding its feet on technical restrictions), so it was probably considered just another comedic adventure back then. It’s a straightforward tale, with a few notable Chaplin sight gags – the employment window, where people keep getting there one hot second before the Tramp, and the “fake arms” gag, both gags relying on split-second timing. (They use the fake arms gag on WHOSE LINE IS IT ANYWAY? where the actor’s arms are actually the arms of the man behind him.)

Tramp steals and re-steals the wallet from the two original thieves, who stole it from a rich drunk who looks like the Monopoly guy stumbling down the street. The message seems to be that if it’s a dog’s life, any money is good money, and attaining it in any way possible is fine and dandy. Which is a real life truth that modern censors would never allow; now we understand the metaphor of the police – that we’re all nothing but a pack of animals scrounging for existence…