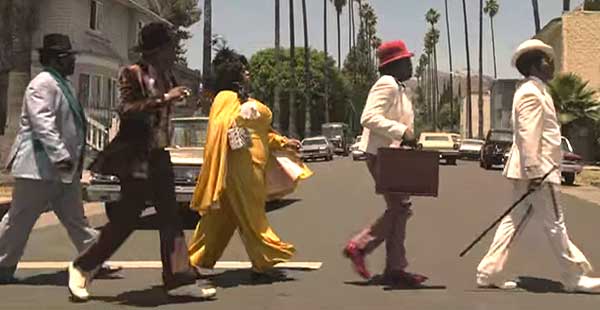 DOLEMITE IS MY NAME is a comeback film for Eddie Murphy? That’s a well-deserved question mark! As its filmmakers whine about being snubbed at the 2020 Oscars, they neglect to mention they’ve made a formulaic film about a conman with questionable product that deserves attention only as a novelty.

As a historical figure, the flamboyant Rudy Ray Moore (played reasonably authentically by Eddie Murphy) holds resonance for the black community, as a powerful hustler that fought against intrinsic white oppression to publicize himself as an entertainer. But this film is not doing the man justice, because Eddie Murphy is going around touting it as a comedy when it is more correctly a biopic of a comedian.

That’s the failure point of this movie that is being marketed as freakin’ hilarious. It is not. It’s about a person who was regarded as hilarious by the audiences of his time.

DOLEMITE, the film made by Rudy Ray Moore with his tiger blood and pure force of will, was a blaxploitation film released in 1975. DOLEMITE IS MY NAME is not a blaxploitation film, yet I think Eddie and Co. (writers Scott Alexander, Larry Karaszewski, and director Craig Brewer (BLACK SNAKE MOAN, EMPIRE)) might believe that their film does fall under that genre, and thus deserves some kind of notoriety. I can’t tell. Just like we can’t tell whether Rudy is in on his own joke of making a film so bad it will be considered good by certain downtrodden demographics.

We see Rudy’s humble beginnings in comedy clubs, and how he hits on the idea to visit the ghetto with cash and hooch, paying to record all the old timers’ rhyming boasts. He refines and rehearses these bits at home, outfits himself like a pimp, and hits his local comedy clubs as a character named Dolemite: “Dolemite is my name and fuckin’ up motherfuckers is my game!” It’s a smash, as he brings a tribal approach to what was once “Buddy Hackett shit” – instead of rimshots, he cajoled the jazz backing band to accompany him with jungle rhythms, making his performances a place where black people come to dance erotically, as per WALK HARD.

When we see Rudy/Dolemite at these clubs, he’s killing.  But it’s not “funny” by today’s tastes. It’s smartly woven dialogue, ribald in content and demonic in delivery, but in no way laugh out loud. But the black folks who come to dance erotically love it.

Rudy tells his Ma he’s thinking about making a comedy album and she replies, “Is it gonna be like that cute little Bill Cosby – he so sweet!” And I guess this WAS the perception of Bill back in the day; unfortunately now his mention in movies has become ironic, and his name itself has become a verb for rape.

Rudy’s albums become underground smashes, modern rappers considering him “the Godfather of rap” due to his vocal stylings. Then he turns his sights to movies. This is where it treads across a line in the sand when it comes to quality art. Not everyone who wants to make a movie is either qualified to do so, or can make a good one.

But Rudy is apparently deserving of the goal because he hits us with the platitude, “I want the WORLD to know I exist!” Well, don’t we all, Rudy? Don’t we all? 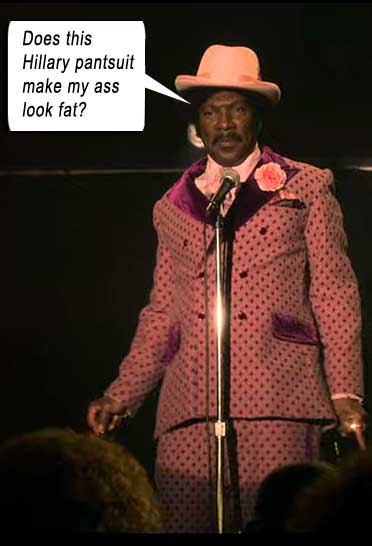 Now we are in THE ROOM territory, as this untalented filmmaker with nothing but ambition – much like Tommy Wiseau – goes about independently financing, producing, directing, starring in and marketing DOLEMITE, a movie which could arguably be held up – like Wiseau’s THE ROOM – as one of the worst movies ever made. The story of the pimp on a revenge quest against the people who wrongly-jailed him does not take itself seriously, so there’s that mitigation. But it’s still quite the piece of dogshit.

The lovemaking scene takes us, the audience, for idiots, as it shows all Rudy’s accomplices manipulating props around the room to make the lovemaking an over-the-top energetic satire, while Martin – the director – looks on in surprise that they rigged the bedroom set in this way. Even if it was a surprise that this gag was going to be performed, he can clearly see grips on-set off-camera waiting to pull on levers! What the FUCK kind of idiots do they think we are to shoot the scene this way like it was a surprise to the director? Reminds us of the stupidity of the ROCKY IV scene in which everyone was shocked at Apollo Creed’s big production number with James Brown.

Rudy dresses like his pimp character Dolemite for meetings, canvassing indie theaters to show his film. Like Pay-To-Play, he hires one theater for $500, then advertises himself with leaflets and word-of-mouth. It packs out, piquing the attention of distributor Dimension Films (led by Bob Odenkirk). The final shot shows us Rudy at the Dimension premier, the theater so packed that another audience is left waiting outside, with Rudy entertaining them. Did this happen? Maybe. The outro titles tell us DOLEMITE was one of the biggest movies of the year…

The saddest title card is the last one: “Lovingly dedicated to Charlie Murphy 1959-2017.” Now why wasn’t Charlie, a gifted comedian himself, ever a fixture in any of Eddie’s films? Why did it take his death to become a part of an Eddie Murphy film?

DOLEMITE IS MY NAME is a mix of Mario Van Peebles’s BAADASSSSS! (we encounter all the tribulations of the independent black filmmaker), meeting James Franco’s THE DISASTER ARTIST (a good movie about the making of a bad movie). (And yes, BAADASSSSS! itself is a tribute to the making of SWEET SWEETBACK’S BAADASSSSS SONG, but that movie had a lot more blaxploitation street-cred than DOLEMITE.)