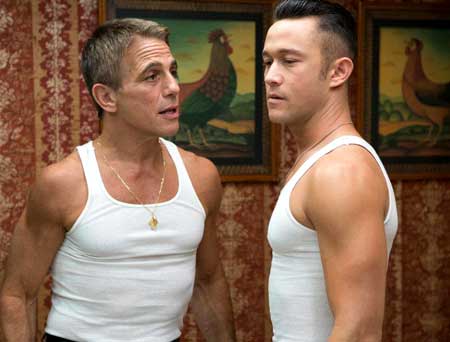 Is this what we came to see? Cock against cock?

Actor Gordon-Levitt has written and/or produced and directed a few smaller pieces before this feature film debut, yet DON JON positively thrums with confidence and guile, the master stroke of a master stroker. It’s a lot of fun – until it gets “messagey” about sex.

Tony Danza, old and skinny, yet ripped like a cable, in a great role as Jon’s loudmouth father. (Poor guy got typecast so badly after WHO’S THE BOSS? with his sonorous cries of “Angelaw.” Is it cheeky coincidence his wife’s name here is – Angela?! But he never says it once!) Glenn Headly is doting mother Angela, who only wants a grandchild (and for Tony to stop calling her “Angelaw”).

Jon’s frank voiceover in the film’s opening scenes is basically just everything we guys have spoken about in schoolyards and locker rooms and backstage dressing rooms since sex was invented. And his observations will leave every man wondering why he didn’t make this film, at the very least, write it. “I like a good pussy-eating clip, but from down here, there’s nothing good about this! …Missionary is the worst position in all of fucking: the tits lie flat, you can’t see her ass, you can’t really touch her ass cos she’s lying on her back; they won’t let you do it from behind cos they want to look at you, and it’s on me to do all the work…” 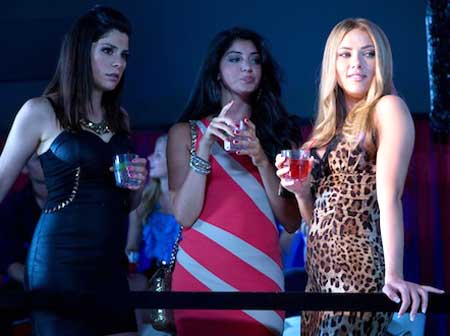 Is this what we came to see? Bitch bitch bitch?

We realize Barbara’s agenda is ominous, as she diverts the conversation away from cleaning products “cos it’s not sexy!” while they’re in a store where he wants to buy same. Instead of letting him even say that he enjoys cleaning his apartment, she plans to force her cleaning lady on him. “Don’t buy mops now – it’s embarrassing!”

Julianne Moore is Esther, an older woman who makes Jon see sex is a two-way street – in order to really enjoy it. Which is demonstrably wrong if you’ve had sex with at least three people. At the same time. It’s a woman’s rationale of what makes sex good. Levitt is making this movie as if he doesn’t believe everything he said in its opening scenes. Why? So he can fake sincerity and continue to get laid in real life! Jon is meant to arc towards enlightenment, but – as I said in VELVET GOLDMINE – why can’t enlightenment be the realization that he was right about being shallow?

When we are too young to know better, sex is the alpha and omega; we arc to the realization it is merely a diversion, a power play, an evolutionary necessity – like pizza, even if it’s bad, it’s still kinda good. But DON JON connects sex to “love” (whatever that is), as if good sex can only be achieved through good love. Royt. And Jon’s “loving” connection with Esther is through the tragedy of her dead husband and son. Is this any way to conduct a mentally stable sexual encounter?

DON JON is another movie that highlights the madness of a society that revolves around sex yet denies that it does. It’s about the fact that women cannot EVER satisfy all a man’s needs. It’s just not the nature of the human species. 50-year marriage or a one-night hound dog, every guy in every relationship is unsatisfied. And anyone who says he is – is lyin’.

JGL says he’s a feminist.
Of course he does.
Why?
The short answer: to get laid.
The long answer: The better you can fake sincerity, the better your chances of getting laid.