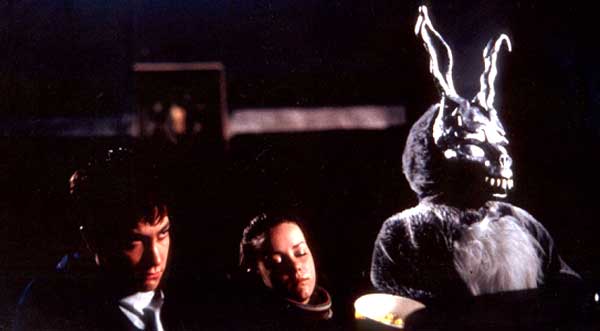 Wake me when the ambiguity’s over…

Darkness is as Darko does…

The Tears For Fears song, Mad World, closes DONNIE DARKO. As it softly meanders under the closing montage of characters, everything in this movie clacks into place in your head… it is like tension released between your shoulder blades; like the exhalation of breath after holding it in sympathy with Gene Hackman trapped in THE POSEIDON ADVENTURE. DONNIE DARKO will quietly enmesh you in its intrigue, spiraling to a morbid climax where nothing makes sense – until everything makes sense. Or not.

The jet engine through the bedroom roof is the key. Or is it the giant sinister rabbit? Some might say the death of Donnie’s newly minted girlfriend Gretchen (Jena Malone) is the catalyst that caused Donnie to make the fateful decision of restoring balance to the universe…

Movie opens with young Donnie Darko (Jake Gyllenhaal) awakening on a hillside road, disoriented. Just before he moves out of frame, something catches our eye and disorients US: instead of retaining the worried look on his face, a wry smile crosses it. There is more here than meets the eye.

The opening song gives away more of the theme than we realize – INXS’s Never Tear Us Apart: “I was standing / You were there / Two worlds collided / And they could never tear us apart…”

The normalcy of Donnie’s average American family makes everything that happens to him seem doubly strange. Besides sleepwalking and waking in strange places, he sees visions of a person in a rabbit suit, named Frank (James Duval, who is never unmasked), who tells him in a Vader-like voice that he has 28 days, 6 hours, 42 minutes, 12 seconds, before the world will end.

The space-time continuum is out of sync and teen outcast Donnie is somehow connected with its repair. We cannot begin to understand how, and neither can he. Set in the tree-lined suburbs of Anywhere USA (maybe California?) during the year 1988, two parallel time lines are inexplicably interwoven, and only Donnie’s unwitting power of mentally accessing both can restore balance. DONNIE DARKO could be the most subtle “superhero” movie ever made – one in which the superhero (Darko) is unaware of the powers he accesses and in which we the audience are also kept from knowing his true powers. Never realizing we are watching a “super” hero because there’s no dead giveaway of wearing his undies on the outside of his pants.

The writer’s own explanation: that someone from an alternate, tangential universe (Frank) is trying to get through to this universe to rectify the rip in space-time. And Donnie is the willing, though unknowing, receptacle.

Unlike BACK TO THE FUTURE – Donnie gives a nod to the “time machine shaped like a DeLorean” – where events in the present are traced to events in the past, time here is juggled and twisted back on itself in a tip-of-the-tongue madness. Writer-director Richard Kelly constructs a time travel mythology – not scientific in any way – based around this movie’s plot; expounded in a mysterious book that Donnie is bequeathed by his science teacher (Noah Wyle, who has the misfortune to resemble vanilla Breckin Meyer). 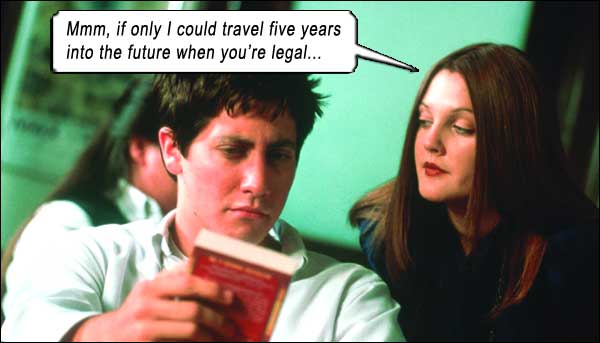 Thematically touching on alternate universes, time portals, membrane theory, this movie itself is some kind of time capsule, as it captures Patrick Swayze at the tail-end of his dancing career (DIRTY DANCING was a loooong time ago), Katherine Ross from an era before that (BUTCH CASSIDY AND THE SUNDANCE KID), Jake Gyllenhaal at the start of his storied career (sowing the seeds of intensity that would bring him many acting awards and an Oscar nod), Seth Rogen as a glorified extra with two lines, long before he was the ribald voice of a generation (in true Rogen fashion, his first line to Jena Malone is “I like your boobs!”); Drew Barrymore‘s interest in this film enabled its funding, yet she seems to be in a strange space-time sandwich here (between two Adam Sandler turds and two CHARLIE’S ANGELS debacles). Holmes Osborne is Donnie’s fun father and Mary McDonnell his strangely detached mother.

Then there is Jake’s sister Maggie, playing Donnie’s sister Elizabeth, spectacularly beautiful and young, her smile as radiant as Donnie’s head-bowed sneer is ominous, like a supernova in a universe of sputtering candles, simultaneously cherubic and hotter than a devil’s pancake. She is the cutest thing I have ever seen. Quite the sensual feat when up against the jailbait-cute Jena Malone (grown to legal age since her pivotal role in CONTACT).

DONNIE DARKO was released in the United States just after “9/11,” so was lost amidst the psychological debris of W’s inadequacies – at preventing the attack and then at botching its response. A messianic tale of sacrifice too layered to be appreciated in one viewing does not usually play well with dunderhead American audiences at the best of times, let alone the worst of times. Ignorant marketing as a teen comedy didn’t help. Luckily, the dweeb brigade rediscovered the film and cultified it.

Donnie’s cheerful laugh in the final scenes, when he knows his timeline is about to collapse under a jet engine, is as ominous and incongruous as his opening wry smile.

But maybe Donnie should not have sacrificed himself. Look at the timeline we ended up in: W’s reign of terror after abrogating his vow and constitutional duty of keeping America safe.

Might we have been better off if Donnie had let the rabbit live?