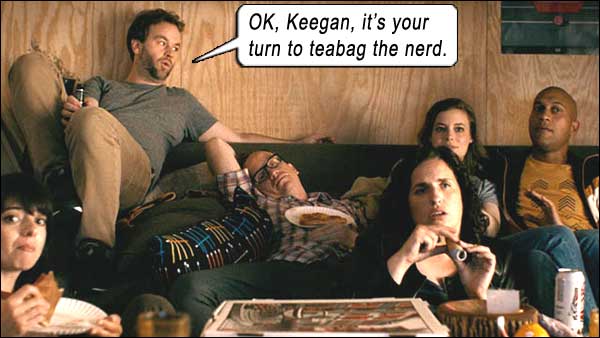 …your 20s were all about hope, and your 30s is all about how dumb it was to hope…
— Chris Gethard, DON’T THINK TWICE

DON’T LOOK BACK is the story of six fast friends chasing the dream together in a New York improv comedy troupe called The Commune, giving their all to make it. And then – one of them does.

Mike Birbiglia writes, directs, produces and co-stars in this down-to-Earth paean to artists who have sold their souls to the street. These particular characters are in comedy, but the story could well be applied to any creative endeavor. Being in the trenches himself (as a stand-up comedian, writer and actor), Birbiglia captures the nobility and futility of the journey, the tribulations and longing, the poverty and desperation, the fundamental dead-end-ness of being at street level for so long you begin to question whether you are, in fact, at your destination.

The six friends are the charismatic Jack (Keegan Michael-Key), his low-self-esteem girlfriend Samantha (Gillian Jacobs – too hot for TV, but in movies, the poor man’s Jaime Pressly), quiet Bill (Chris Gethard), cartoonist Allison (Kate Micucci), Lindsay with rich parents (Tami Sagher), and comedy teacher Miles (Birbiglia), who, though he leads an improv group, only uses a stock set of pickup lines on his students.

They’re so close that they can elicit laughs from each other even through the inappropriateness of impersonating Bill’s father after he has a stroke and can hardly speak. So writer Birbiglia goes a long way to establish the friends’ firmness. They’re all in their mid-30s, so when a scout from the hit comedy show WEEKEND LIVE (an obvious analog for SATURDAY NIGHT LIVE) visits their improv session in front of a small but appreciative crowd, the desperation to score an audition is palpable in their actions and on their faces.

Only Jack and Samantha get a callback…

The movie title is a reference to the ethos of improv groups: dive in, get wet, be saucy, but whatever you do, don’t wreck the momentum by thinking twice about where you’re going or what you’re doing. And then – one of them does.

Whereas Jack shows up, auditions, and gets the WEEKEND gig, Samantha shows up at the audition location, then leaves in a haze of indecision. She flinches. She thinks twice about whether WEEKEND is what she really wants. And she fails. But this is the one non-believable sequence in a film that gets almost everything else right.

I don’t “get” what writer Birbiglia is trying to convey with Samantha. Is he trying to find a “self-destructive” character that is yet self-aware that she is placing obstacles in her own path? Okay, but she never even attended her hard-won audition. She arrived at the building and didn’t go inside. I’ve known many people who are self-destructive: for example, the type who has a meeting with a producer the next day and instead of resting and going over their pitch, they go out and wreck themselves, so that they sleep through their alarm the next day, so that they can “inadvertently” miss the meeting and then laugh to their friends how they missed the meeting because they were so wrecked. Another example: I’ve worked for artists that waste their money and time in the recording studio without actually “finishing” anything (constantly stuck in a time-loop of re-working, re-editing, re-mixing, re-recording), for no reason other than to block themselves from the potential failure of actually releasing their product and seeing it fail. So though I understand the type Birbiglia is going for, he missed one integral part of the equation: Samantha would have gone in to audition if she turned up at the building. And blown it subconsciously if she didn’t really want it.

The self-destructive character that Gillian Jacobs is playing, might have done three things: a) blown the show that the scouts attended, so that she would not have been chosen for an audition in the first place; b) not turned up to the audition, due to [any excuse, see above], or c) done the audition and blown it [again, insert any excuse, e.g. my leg hurt, I had stomach cramps, I just didn’t feel it, blah blah]. But she turned up at the building, had second thoughts and turned away. And we’re meant to feel – sorrow? happiness? empathy? concern? You lost me at hot blonde who’s worried about anything.

Because I live in LA, I’ve seen thousands of chronic failures (and will forever ponder on whether I possess my own self-destructive tendencies), but I’ve never seen ANYONE at street level who – as Samantha claims – “likes it down here.” You know how I can be absolutely sure of that? Because Samantha herself wants a new improv location, and to make enough money to be comfortable, and wants ever-bigger crowds to witness her art. DON’T THINK TWICE makes the same mistake as ROCK STAR with Mark Wahlberg, where the artist had made it, but opted to step away from the big time to go small time because he claimed he liked it that way. But what was he aiming for when he went small time? The Big Time..

Samantha is written like she wants to remain poor and unrecognized, with a talent for her craft, but no desire to be recognized for that talent. And there’s no such thing. Sure, you might decry the trappings of fame, or the hounding of the paparazzi, or even the guilty money, however, you will always CRAVE recognition of your art. 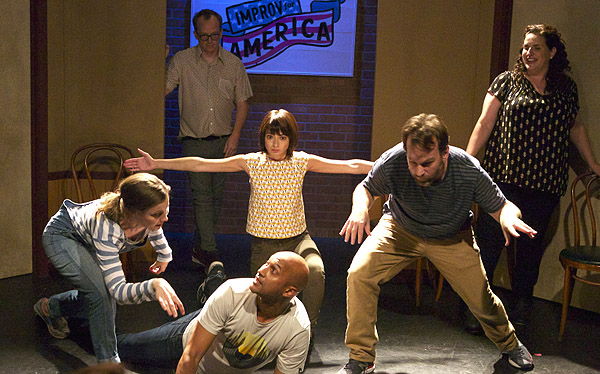 Keegan-Michael Key falls into success after slipping on a Jordan Peele.
[I went a long way for that joke – now you’re gonna suffer for it…]

Birbiglia also explores, with greater success, the stresses on relationships when one out of six friends suddenly rockets to success. When Jack gets the WEEKEND gig, he is in no position to start “recommending” anyone to the producers – especially not his friends. Yet his close friends consider it Jack’s duty to do just that, submitting their writing samples to him, with that undercurrent of desperation in their voices. We see Jack’s obsequious attempts to promote his friends at WEEKEND, where he is shut down decisively (not least by the show’s producer, an imperious Lorne Michaels analog played by Seth Barrish: “Forget about submitting work. In your first year, just pray I don’t fire you.”). Jack is then accused of being big-headed, selfish, “you’ve changed,” etc. Yet all these friends are seen even undercutting each other in their maddening attempts to court Jack.

Jack’s once-loving relationship with Samantha deteriorates due to Samantha once again over-thinking her role in life and love, i.e. thinking twice. Birbiglia contrasts this fragmenting relationship with his own character’s newfound love. Miles dates a woman he is crazy about (Maggie Kemper as Liz), yet they both discover she is pregnant from “some guy in Brazil.” She decides to keep the baby. And Miles immediately offers to be there as surrogate father and continued lover. Without thinking twice. In the end, we see Miles’ quick decisions (as opposed to Samantha’s torturous hedging) would bring him happiness.

Birbiglia also captures that ineffable discomfort in a nuveau-famous friend introducing a superstar to his clique of nobodies. Ben Stiller (cameo as himself) attends a Commune show, and later, Jack brings Stiller to the troupe’s table, where they all start asking him “fan” questions, embarrassing Jack and Stiller. In a hilarious meta commentary, Lindsay commends Ben, “You’ve never shied away from playing an unlikable character” – proven here yet again, as Stiller loves to play his real life cameos as a self-absorbed prick.

When Jack’s success is inadvertently responsible for fragmenting the whole troupe, Samantha finds herself doing a Commune show alone. During her skit about being trapped down a well, Jack unexpectedly walks in, to show his support for her. As the character trying to save her, he says all the right things sincerely, “I’m just saying, I’m not going to leave you!” but she has a self-aware (though probably a little self-absorbed as well) comeback, “Maybe I belong in the well?” Self-absorbed because she seems to be only thinking about how SHE might be dumped by Jack with his upper echelon schedule, and getting in her resignation before her firing, so to speak.

She says she LIKES it in the well. Which again, Birbiglia, is an outright lie! We all might love our art enough to do it for free – but only for so long. We all have to “pay our dues” – but if you’re only paying dues with no recompense, there comes a point where your art gets mighty tiresome mighty fast. If you “like” your low-end position so much, Samantha, why are you striving at all for recognition, financial stability, success?

In this scene, an incredible acting moment from Key: When Samantha says, “I think we both know it’s over,” we see myriad emotions running across his face, wondering if she means her career is over, them as a couple is over, their improv group is over, etc.

DON’T THINK TWICE ends on an upbeat, yet unrealistic, note. “Eight months later” we see the gang has all gathered at the funeral of Bill’s father, still cracking inappropriate jokes. Miles and Liz are happy parents of a bouncing baby, Lindsay is now a writer for WEEKEND, Allison has had her cartoons published, and syrup flows like bacchanalia wine. Where did all this good fortune come from?! Jack is rushing to catch a plane to New York, not with Samantha anymore, but neither is this hot blonde Samantha with anyone else, meaning there is that “hope” that maybe…? And the gang all Friend Zone each other in a new studio that Bill’s father bequeathed him in some sneaky foreshadowing.

So, uh, Lindsay being a writer on WEEKEND doesn’t affect the time she can volunteer to “fix up” the new studio? Doesn’t Allison’s cartoon book come with a promo tour, or can she still spend her days in this dump painting the walls on all fours? How is Bill going to earn money now while he fixes up the new improv space? Are Miles and Liz going to dump their newborn somewhere to work on the improv space? To say nothing of funneling money into promotion for the venue and their art in a brand new town. And what the hell is hot blonde Samantha doing hanging around this bundle of misfits?…

Then again, maybe I should just enjoy the art of Birbiglia and not think twice about it.