DOUBT lives up to its title so staunchly that we cannot do anything but. 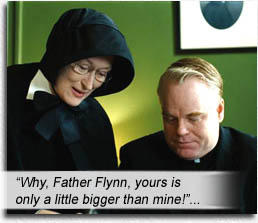 About a Catholic priest, Father Flynn (the magnificent Philip Seymour Hoffman), accused by a nun, Sister Aloysius (the also-magnificent Meryl Streep) of inappropriate relations with a grade-school boy.

No evidence, no proof, no witnesses, no reports. Yet Aloysius has no doubt.

Caught in the crossfire of accusation and indecision is Sister James (Amy Adams), whose sympathies flip-flop between Aloysius and Flynn.

Written and directed by John Patrick Shanley, from his Pulitzer Prize-winning play of the same name, DOUBT is a writhing serpent of accusation and denial, strident hypocrisy, sexual frustration and lurid innuendo. Yes, it’s about Catholics.

Father Flynn is one of those cool priests who gags with the schoolboys and gives sermons that don’t put people to sleep. In trying to make the learning environment at St. Nicholas school more personable, Flynn arouses the suspicious eye of battleaxe Aloysius, dragonlady school principal, who claims his friendliness is pedophilia.

But this word is never mentioned. Set in 1964, social mores force everyone to tiptoe around the most damaging and dangerous crimes. Neither does anyone say the words molestation, rape, homosexual, or even sex.

DOUBT is so good because it never blatantly shows us the “crime” that Flynn is accused of. It gives us intimations of a closeness between Flynn and young African-American altar boy, Donald (Joseph Foster) and then – the accusation hits everyone square in the bleeding heart.

We doubt the accusation at first, then we doubt Flynn’s denial.

Then, in a morbid twist, Donald’s mother (Viola Davis) reveals to Sister Aloysius that Donald may have caused the alleged incident unintentionally, because he may be “that way.” And we find ourselves doubting the poor boy’s sexuality.

But every scene is truncated by interruptions – a phone call, a knock on the door, or someone just busting in like Kramer – and none of the arguments are resolved.

Just when you think Shanley has left us hanging – he has!

We end up doubting exactly what transpired between poor Donald and Father Flynn, who is forced to resign his post by the acerbic Aloysius. A pivotal scene between Hoffman and Streep is like Godzilla and Megalon thundering through skyscrapers, Hoffman’s Flynn outraged yet waxing ambiguous throughout, “There are things that cannot be said,” while Streep’s Aloysius frustratingly steamrolls him. Flynn asks Aloysius if she has ever committed a mortal sin – to which she admits ‘yes’ – and of his last great sin being between him and his confessor. What do we make of this?

Well, doubt, for one thing!

We may think DOUBT is structured to make Flynn look falsely accused – but this doesn’t account for the way WOMEN would view the exact same film. Through high maintenance shrike eyes. Women who would side with the nun simply for the sameness of sex; simply because a woman accusing a man is “always right”; simply because it has been inculcated in this double-standard society that grown men fiddling with boys are somehow worse than grown women doing the same…

As proof of this view askew, in the pivotal Hoffman/Streep scene, Flynn is asked whether he gave Donald altar wine to drink. He flatly denies it, “No.” I watched this movie with a female, who swore that she never heard Flynn deny it and that his assertions of innocence only proved he was guilty of pedophilia straight up. I had to rewind the DVD to prove that Flynn had said “No” – to the female’s surprise!

So even though most of us find Flynn’s ordeal intolerable, dealing with the shriking, frigid nun (who needs a good stiff one to stop thinking of other people getting good stiff ones), there will always be females siding with Aloysius from the outset, no proof needed to incarcerate a Man – because his maleness is a sure sign of his guilt.

But there is one great surprise in store for all of us. Throughout her insane accusations, Aloysius was always “certain.” And months after Father Flynn has been ousted from her school (and actually promoted at another diocese), her incredible character arc in the film’s final moments suddenly throws us all into Doubt!

Now who where wha–?