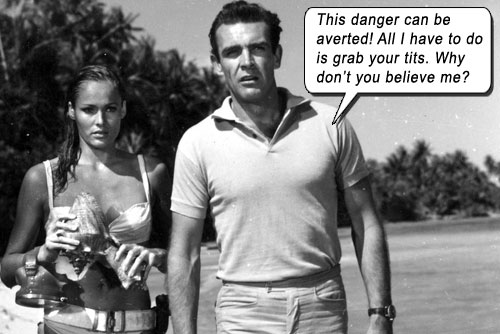 Vote No on NO.

It will always be a problem introducing the world to a new Bond. When Sean Connery was hired, it was a disaster because it wasn’t David Niven.
– Barbara Broccoli.

DR. NO takes a long time to get going. And by ‘get going’ I mean Ursula Andress in her granny-panty bikini.

Back when chicks were called dames and phones were giant blocks of plastic that couldn’t play Angry Birds, the world’s greatest super spy was birthed – James Bond 007.

From Ian Fleming’s sixth novel to feature James Bond, Dr. No. (published 1957), this first filmic Bond (Sean Connery) travels to Jamaica to investigate the disappearance of a fellow agent, uncovering the metal-handed terrorist Dr. No in an island lair, disrupting NASA launches, with the ultimate aim of Taking Over The World Bwohahahahaaa! Bond thwarts No with the help of CIA operative Felix Leiter and a chick in a bikini.

DR. NO has the distinction of starting a monumental franchise; it’s the very first James Bond 007 film, and the first film starring Sean Connery as Bond. Producer Albert R. Broccoli held a contest as a publicity stunt to find the person who most personified author Ian Fleming’s secret agent character (apparently after Connery had been cast), with the winner a 28-year-old model, Peter Anthony. Couldn’t act.

The 32-year-old, Scottish-born Connery was debonair, dashing, muscular, with thinning hair that many speculated was fake (the actual rugs would start during GOLDFINGER, 1964), and would personify the British agent with the license to kill through seven films total (one of them not produced by Broccoli’s production company – 1983’s NEVER SAY NEVER AGAIN – which caused great legal distress in the Broccoli camp, and untold cataloguing distress for Bond completists).

Many diehards still regard Connery as “the best Bond.”

DR. NO is filled with James Bond tropes that had not yet become tropes: such as the villain given numerous opportunities to kill the hero, and preferring to explain his whole plan to the hero first before putting the hero in a supposed lethal trap where the chances of the hero escaping are nearly 100% due to the utter thoughtlessness of the lethal trap. 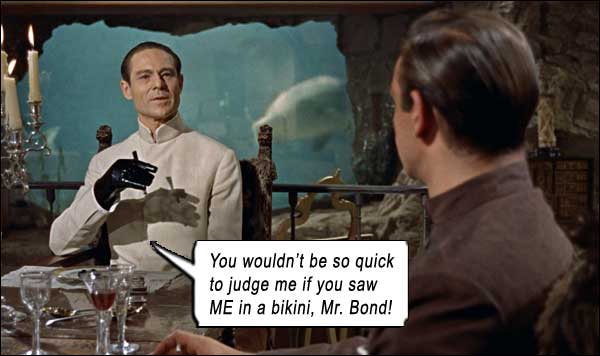 Joseph Wiseman is the megalomaniac villain Dr. No, with his eyes pulled back to look half-Chinese (so it’s only half-racist). He demonstrates how strong he is by crushing steel with his bionic metal hands – but he doesn’t crush Bond’s windpipe with those hands because – that wouldn’t be cricket. Dr. No wants what any self-respecting villain wants: to Take Over The World Bwohaha. What any villain would actually do once you take over the world has always escaped me. Are you going to sit in your office and study the budget deficits of all the countries and try to balance them? Are you going to stop selling arms to both sides in the Middle Eastern conflict (cough-America!) because technically, it’s all one country now under your leadership? I mean, what is your first day gonna look like in ruling the world – designing a new flag for your whole world nation, or just making sure that the idiot who buys donuts for everyone in the office doesn’t forget your favorite sugary twists?…

Bond’s spy agency personnel from “MI6” (Military Intelligence 6) are established: Bernard Lee as ‘M’ the boss, and Lois Maxwell as secretary Miss Moneypenny (eternally flirting with Bond, who gently rebukes her advances, probably because she looks old enough to be his aunt).

In its day, it was a spy classic, but DR. NO has dated badly, not just with its “technology” but in its cinematic techniques; cameras are steady, pointing dutifully at the subjects in frame, boring scenes dissolve into other boring scenes, with Bond spending an inordinate amount of time sniffing around in hotel rooms, bars, on some island, bedding arbitrary wenches, being shadowed by people that are really just spies on his side, sent by a smug guy who looks like Jack Lord from HAWAII FIVE-O– Heey! It is Jack Lord! We’re any of us ever that young? Lord is CIA op Felix Leiter, a character who comes with a subsidiary character, Quarrel (John Kitzmiller), the token Black Guy Who Gets Killed First. 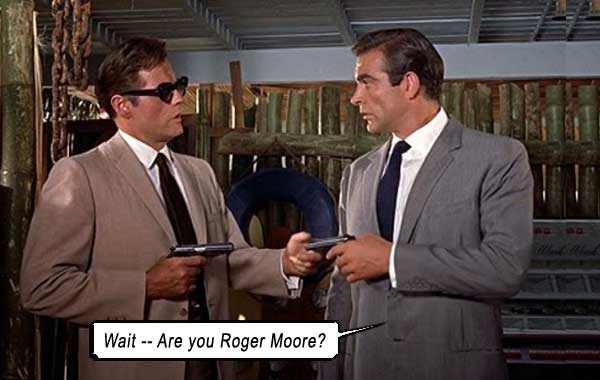 And eventually – we’re rewarded with the first Bond Girl – Ursula Andress as Honey Ryder. And then we are exposed to her moronic demeanor and wide-assed swimsuit and we wonder why we even bothered waiting. She’s window dressing on Bond’s arm, absolutely pointless to the plot; she screams, she runs, she gets half-naked, she tries to act.

On Dr. No’s island, after at least ten opportunities to kill Bond, who, by No’s own admission, is the bane of his operation, No asks Bond to join his team. Bond says British things that mean Fuck You. So No explains his whole plan to Bond before putting Bond in a supposed lethal trap where the chances of Bond escaping are nearly 100% due to the utter thoughtlessness of the lethal trap.

Oh no they di’int! They didn’t just put Bond in a cell with an air duct the size of an elephant’s ass just above his head! Which he kicks out and crawls through, because – like all air ducts – it’s totally large enough for a man to crawl through. Suddenly, a rushing wave of water comes through the duct and Bond has to hold on for dear life to avoid being swept away. After more interminable crawling, Bond eventually finds another vent opening out onto a computer room– hang on! If water is passing through these ducts,  how could they possibly open out as vents for rooms? Especially a computer room?! What kind of maniac would put the toilet-flushing mechanism on the same circuit as the air conditioning? No wonder they call Dr. No a mad scientist! 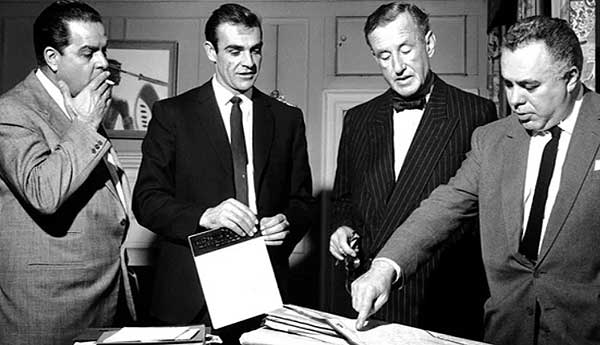 Another example of mad: climax finds Bond in disguise in a radiation suit, infiltrating Dr. No’s control room, where everyone is wearing a radiation suit. Why? Because No has built his control room right next to the radioactive isotopes. Guess he didn’t have enough criminal funds to build his control room in a lead-lined room, you frickin’ idiot! (Any wonder it was so easy to spoof this scene in AUSTIN POWERS?)

Punching ensues, even though punching through a radiation suit is presumably not nearly as effective as fist on skin. Yet No’s henchmen all go down at Bond’s Marquess of Queensberry fisticuffs like Apollo Creed being bitched by Ivan Drago. No goes into the isotope drink – and this man with bionic hands that can crush steel can’t hold onto a railing to stop himself from sinking under the radioactive waters.

And Bond celebrates by screwing Honey in the back of a rowboat, while they’re being towed by the British navy. Pssh! Secret agents and the girls in granny panties who love them… 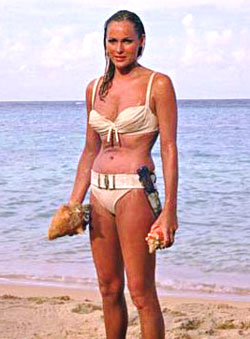 I include this pic of half-naked Ursula Andress for the same reason the film applied her to its sausage-fest: prurient distraction. No link to the plot whatsoever.

With all the fuss made over Honeychile’s assets, I feel the need to dispel the notion that she’s all that. She’s weirdly shaped. Yes, she is reasonably hot, and I guess in the 60s she was considered a ’10’ but is she sucking her gut in? Has she had Caesarean surgery? Does her hotness stem not from her misshapen body but from her willingness to get it all off because that’s her only purpose in any film? She was much hotter, and much nakeder in RED SUN.

Apples to apples – or cantaloupes to cantaloupes – I’ve included a picture of Raquel Welch from 1966’s ONE MILLION SHAMELESS YEARS B.C. Not the iconic posed photo, as that is too smokin hot for anyone’s good, but a pic congruent with Honey Ryder’s. Raquel’s got it in better classical proportion. 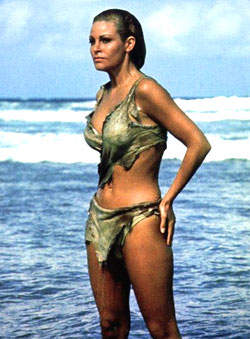