There is one very provocative idea in DRACULA 2000 – all the rest is crap. The crap goes like this: In 2000, Dracula comes to New Orleans seeking the daughter of Van Helsing. Bland action movie ensues. Only redeeming factor is that every chick is groin-achingly hot.

The provocative idea is that Dracula is not a warrior impaler or a Count from Transylvania – he is the Apostle Judas Iscariot! More on this awesome audacity in a minute…

Watching this movie in 2011 is confusing because we find ourselves rooting for the wrong stars, whose fortunes have seesawed since its release in 2000. Back then, Jonny Lee Miller was the hotboy, coming off the mind-scarring TRAINSPOTTING (1996) and the Victorian impertinence of PLUNKETT & MACLEANE (1999); while Gerard Butler was a handsome nobody with chiseled abs. Now Butler is the battle-worn Spartan, the Romantic Lead, the Man’s Man; while Miller has virtually abandoned the movie scene, slowly receding into TV wasteland, along with his hairline.

So when Miller pulls the action hero stunts here, snidely quips and turns up just in time to save damsels, we imagine Butler’s Dracula is going to make quick mincemeat of him and get down to the business of making women swoon with his Scottish brogue and chiseled abs. But Jonny gets the girl!

Van Helsing (Plummer) explains how he has tried for 100 years to kill “he who cannot be killed,” keeping himself alive by injecting himself with small doses of Dracula’s immortal blood. That’s why Dracula wants Van Helsing’s daughter, Mary (Justine Waddell) – she has vestiges of his blood in her. (Which makes us wonder, Why then, doesn’t he also want Van Helsing as another Teen Member of his Scooby Wagon? Sure, he wants to court Mary like a sensual lover, but both Mary and Van Helsing are equally repulsed by Dracula – why concentrate on bringing just the girl around? It’s probably easier to convince the old man to become a vampire, with promises of lustful tribades at his feet.)

To escape traps, Dracula can turn into a wolf, a bunch of tiny bats, or even liquid nitrogen fog. We are told how he detests all things Christian, like holy water, the crucifix and the Bible (Hey! *I* detest all things Christian too! Does that make me a vampire? How cool!), yet Simon cannot figure how silver – which kills vampires – figures into the equation.

Simon meets and vows to protect the perfect-featured Mary, who asks him, “Why are you doing this?” Oh, I dunno – maybe cos you’re hotter than a docker’s armpit! (Like any action hero, I sorely doubt he would be as protective of a 350-lb moose-face.) 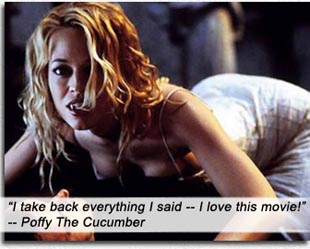 When they confront him, Dracula fills in the Apostle backstory – and it’s the only interesting, original moment in the movie, as we see a flashback of Dracula as Judas at the Last Supper, then hanging himself, his 30 pieces of silver falling from his purse (SILVER!). As his body hangs in the noose – his eyes snap open.

Any Dracula aficionado will recognize familiar names and events at every turn, slightly tweaked to fit this bland reimagining; in lieu of storytelling, co-writers Joel Soisson and Patrick Lussier (also director) try to distract us with hotties at regular intervals, baring their fangs and promising to suck us dry – Jennifer Esposito‘s tousle of ass-length curls, Jeri Ryan‘s tight, voluptuous curves, Colleen Fitzpatrick‘s blond abandon, not to mention Justine Waddell’s innocent spinner schoolgirl smoothness. Does it work? What was the question again?

For someone who can’t be killed, Dracula is killed pretty easily, as he hangs by a cord from an arthouse crucifix, not dying, but not doing anything to escape either. Hey buddy, how about turning into those little bats or something? Nope – he just hangs there watching the sun rise, and dies flaming on like the Human Torch under its rays. It’s a long road to Sparta.