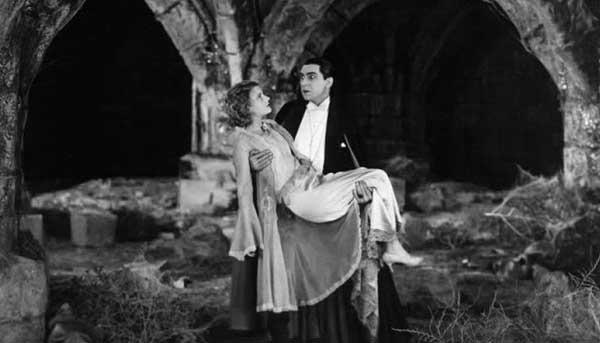 For someone being abducted, she’s taking it like someone who’s slightly impatient
that he won’t pull over and ask for directions.

DRACULA is a mediocre 1931 movie, but the concept of the undead, blood-craving supernatural demon is so mythically instilled in the planet’s – ahem – bloodstream that this movie’s ongoing mighty aura is more due to the CONCEPT of the vampire entrenched in society’s psyche than any movie-making quality the film-makers might have aspired to.

It was not THIS particular movie which launched the vampire legends, although being only the second film to deal with this theme (the first being Murnau’s NOSFERATU,1922), it surely warrants blame for savagely promulgating the mythos.

Bram Stoker’s 1897 novel was fleshed out (and diluted) for the silver screen by writer/director Tod Browning and a host of other writers. The passage of time and innumerable bastardizations of the story have eroded Stoker’s truly disturbing tale, making it inconsequential to the character at its center – so though our memories composite Christopher Lee’s Dracula debacles and Anne Rice’s vampires and blaxploitation’s BLACULA and Scott Bakula – the original story should be remembered for its compositing of ancient legends into a compelling original tale.

I vont to zuck your cucumber! 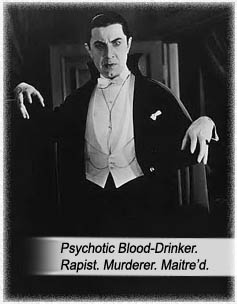 A young British solicitor, Jonathan Harker, travels to the Carpathian Mountains (in Transylvania – yes, say it with the accent) to offer real estate advice to Count Dracula, who wishes to move to London. He discovers the Count to be a blood-sucking denizen of the night, who can shapeshift into a bat or wolf at will, whose reflection cannot be seen in mirrors and whose incisors were badly in need of filing down. All the better to bite the neck and drink the blood of his victims, turning them into “undead” vampires like himself.

Dracula travels to London and cultivates Harker’s fiancée, Mina and her busty clubbing buddy, Lucy, with love bites and blood infusions via carotid. Dr. Van Helsing is called in to examine Mina and Lucy’s strange anemic sickness and knows enough about vampires to eventually kill Dracula by severing his head and driving a stake through his heart while he sleeps in his coffin.

Even the fundamental details of the tale open up so many dark avenues of discussion (possession, psychosis of blood-drinking, perverse sexuality, bizarre murders, sleeping in COFFINS?!) that it would be impossible to explore in a thousand rants.

Hungarian stage star, Bela Lugosi, shot to fame as the eeevil Count Dracula; if it weren’t for his “presentational” stage training, he would never have come up with that “crippled hand thingy” which Christopher Lee borrowed to such great effect not only as Dracula himself, but also Fu Manchu, Saruman and Count Dooky Del Rio in STAR WARS EPISODE POO. And Lugosi never actually says, “I vont to zuck yor blud!” File it in the “Play it again, Sam” bin – merely misquoted Legend.

Dwight Frye plays Dracula’s horror movie sidekick, Renfield – brainwashed by Dracula into subservience and psychosis, eating bugs and walking with a stoop like a horror movie sidekick. Fry was immortalized as the “Igor-type sidekick” when he accepted an identical role on FRANKENSTEIN (Nov 1931) as Fritz; further immortalized on Alice Cooper’s 1971 album Love It To Death in The Ballad of Dwight Fry.

Written when Stoker was 50, the novel Dracula is still a scorching read, the brooding words cascading off the page like the liquid nitrogen smoke all these movies use to blanket the ground in graveyards (coincidentally used to great effect on KISS and Alice Cooper stages), but this movie is unfortunately made for another time, a bygone age; when people who hadn’t yet touched each other called themselves “lovers”; when each question was presaged with, “Why,” as in, “Why – what’s the matter, darling?”; when the Hero ran like a girl and never appeared anywhere without a three-piece suit and his hat; when the simplest of gestures was a melodramatic flourish because that’s the only way stage actors knew how to “act”; when interminable gaping holes of soundlessness have actually become “dramatic silences” in retrospect; when nakedness meant knees…

To quote the great Gary Oldman as The Count in BRAM STOKER’S DRACULA (1992), “I have crossed oceans of time…” This movie has crossed those oceans – and it shows. Even movies from ten years ago look dated – this DRACULA is nearly 80 years old!

And only the great Gary Oldman could truly instill the mind-blanking terror that a blood-drinking maniac should evoke. When we see him as the continental Count or the leather-skinned bat-man, it is a disturbing experience, worthy of a modern incarnation of the aged legend. Lugosi must have been frightful in his day, but nowadays just looks fruity; Christopher Lee’s menace has dated embarrassingly; Tom Cruise and Brad Pitt were just too, too beautiful to be taken seriously and if anyone even mentions Mamuwalde I might have to put on mah mah mah mah mah boogie shoes….