So why is it that films made from Stephen King’s stories turn out, for the most part, to be movies that look as if they’d been chiseled out of Silly Putty by escapees from the Home For the Terminally Inept?
— Harlan Ellison, Oct 1984, “In Which We Scuffle Through The Embers” (Magazine of S&SF).

DREAMCATCHER perfectly embodies Harlan Ellison’s lament: from a novel by King, screenplayed by director Lawrence Kasdan and William Goldman, we palpably feel the tone of King’s words in the tense, superbly-mounted first third of this film, and then seasoned King readers will feel it unravel into formulaic dross due to filmmakers who will never be able to grasp the nuances in King’s tone. 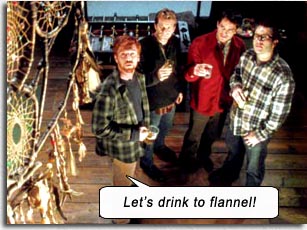 Four best buds take their annual hunting trip into the Maine woods and find that this year, something horrifying is spreading its seed there. Not only that, this year they all seem to be teetering on the edges of midlife crises, visions, suicidal wishes, lovelorn, lost and indecisive. And a “slow” childhood friend named “Dudditz” seems to have summoned them psychically. They employ an old saying that describes their daily grind: “SSDD” (Same Shit Different Day).

The four friends are Beaver (Jason Lee, whose penchant for chewing on toothpicks will be his undoing), Henry (rugged psychotherapist Thomas Jane, who is saved from suicide by a phone call), Jonesy (Damian Lewis, teacher with a library of memories that he guards from evil in the most intriguing way), and Pete (ubercool Timothy Olyphant, whose psychic powers scare off potential panties).

When the four friends are in the woods, the movie is at its peak. When Beaver and Jonesy find a lost stranger wandering the woods with a bloated chest and stomach, burping and farting, they give him shelter – and the horror begins. Meanwhile Henry and Pete find a woman almost frozen in the snow and Pete stays with her while Henry goes for help. Again, bad decision.

The two strangers in the woods are somehow connected to Dudditz. Dudditz as a young man is Donnie Wahlberg, playing slightly retarded – but is he? Or is he from “somewhere else” and only inhabiting this human form?

Extraterrestrial aliens have crash-landed and are infecting humans with worm-like things that psychically overtake the brain. The military (led by Morgan Freeman as a crazy general) are planning a deathstrike on the whole area, which would wipe out innocent townships for miles – unless the four friends and Dudditz can stop the aliens infecting the water supply. Okaaay…

The Dreamcatcher is a Native American totem that filters out nightmares; this movie’s title pertains to Dudditz being a “dreamcatcher,” filtering out evil before it gets to Earth.

DREAMCATCHER is very well made, with good effects and some excellent thriller elements in its first half – Beaver holding down the toilet seat while something bashes at it from below trying to escape is especially nail-biting. But like the blind men and the elephant, if we just catch the second half, we can safely dismiss DREAMCATCHER as a formulaic alien invasion movie with penis-shaped aliens and Morgan-shaped madmen.

In King’s books, the most outlandish plot points sound as plausible as your own name – I remember how easily he rationalized John Smith’s common name and psychic ability in The Dead Zone – but on film, the explanations are more forced. So when the extraterrestrial element is introduced, it doesn’t feel organic to the mystery atmosphere pervading the film up to that point. It feels like a shark jump is imminent. Throw in Morgan Freeman as a fanatic general and Tom Sizemore as his wanton liege, both hunting aliens with army tech-ware and straight faces – and The Fonz is on skis behind Richie’s motorboat… 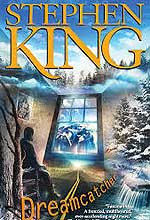