Taking McQueen’s BULLITT (1968) car-chase scene to its extremities, here is a movie ALL ABOUT the car chases. With a funny little plot thrown in for good measure. 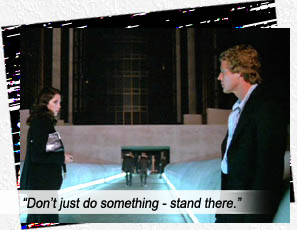 Originally written for McQueen, Ryan O’Neal (known simply as The Driver, a professional getaway car driver) does a bangup job of emotionless motion – yet imagining McQueen in the role still tents our pants.

Set in that golden age when seatbelts were optional (1978), writer-director Walter Hill’s opening scenes are the template for Jason Statham’s rule-driven TRANSPORTER (2002), as the anonymous, blank-faced, mercenary Driver saves his unreliable bank robber clients with his calculated, heart-pounding driving finesse, then states his “rules” and walks away from further jobs. “There isn’t gonna be a next time. You were late.”

Look up smug in the dictionary – before the picture of George Clooney and Brad Pitt (from the OCEAN’S franchise), there was a picture of Bruce Dern from THE DRIVER. Known as The Detective, Dern’s smarm drips like so much honey from the screen it leaves the ground under your TV sticky. On a quest to capture the Driver (“I’m gonna catch me the cowboy that’s never been caught”), he enlists a Mole to hire the Driver for a fake job. Before the Mole can double-cross everyone, the Driver is all over the Mole like a cheap 70’s bellbottom suit.

Coolest scene is when the Mole turns up in a canary-yellow Merc and doubts the Driver’s talent. Driver simply sez, “Get in,” then takes the car on a bender through a parking garage – backwards. After hitting nothing, he then proceeds to hit everything, demolishing the Mercedez. As he walks away, with the passengers in shock, “I don’t work for people like you.”

When the Driver’s liaison – pretty Ronee Blakley who sets up his jobs – is brutally 86’d by the Mole’s accomplice (Rudy Ramos as Teeth), it officially Gets Serious.

Isabelle Adjani is the Driver’s Chick (aka The Player). When Teeth snatches her purse, the Driver enters into a chase for his own money. Hi-octane scene pits the cruel gearstick confidence of the Driver against a young turk behind the wheel of the getaway car. When the getaway car is decimated and the Driver shoots down Teeth, out of professional courtesy, he lets the young turk walk, knowing he had nothing to do with the snatch, only being paid to drive. That’s the world these guys live in.

Don’t be surprised by the smarmy, smug-tastic twist ending, as Detective and Driver are doubly double-crossed. Detective somehow retains his smug and Driver walks away… cool.