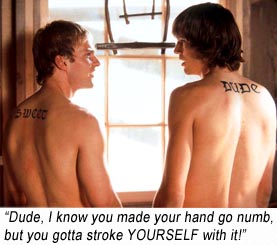 DUDE, WHERE’S MY CAR? is to Ashton Kutcher what BILL AND TED’S EXCELLENT ADVENTURE is to Keanu Reeves – an inauspicious, downright idiotic introduction to the filmic world before taking over said world. (Kutcher’s character name is even phonetically like Theodore Logan Esquire – Jesse Montgomery III.)

In no way a classic comedy – except in the cult sense when Ashton Kutcher inexplicably wins an Academy Award in the deep future – but so doggedly asinine you will find yourself laughing despite your functioning brain.