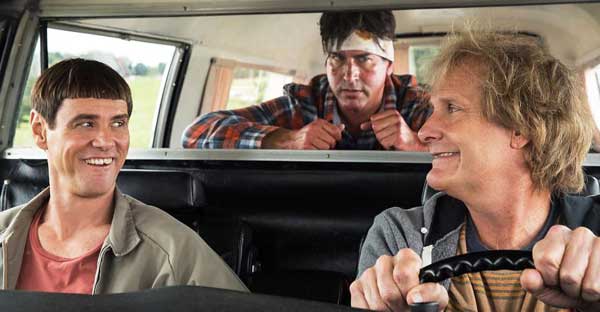 “Think about the dumbest thing we can do that isn’t funny. Then let’s do it.”

First of all, in this illiterate social media environment, I wonder how many people know this is the wrong form of the word “TO.”10%? Yeh, that’s about right.

DUMB AND DUMBER TO catches up with our slightly retarded pals from DUMB AND DUMBER, Lloyd (Jim Carrey) and Harry (Jeff Daniels), 20 years later, as they embark on another road trip, in search of another woman, with another hitman on their tail. It has everything the original movie had. Except comedy.

After Harry discovers he has a 22-year-old daughter, Penny (Rachel Melvin, bubbly, vivacious, and with an extra serving of Trump-stupid), from a one night stand, he and Lloyd set off to find her. Lloyd falls in love with Penny’s picture, his ulterior motive, to hook up with her. Now keep in mind Penny is 22, and though Lloyd might be the mental age of 12, he is at least twice her age. (At the film’s opening, he was playing possum in an institution for the past 20 years to play a joke on Harry.) So though it serves the plot and its twists, this kickstart immediately feels a little creepy.

Harry and Lloyd just miss Penny leaving her rich step-parents’ house, and must pursue her to a science symposium, entrusted by her parents with a priceless package to deliver to her. The parents’ assistant (Rob Riggle) is sent along. Unbeknownst to them, Riggle is a hitman, having an affair with the stepmother (Laurie Holden), trying to steal the fortune of the stepfather (Steve Tom). He wants what’s in that package.

Whereas DUMB AND DUMBER (1994, written and directed by the Farrelly Brothers) was an original, well-written, uproarious, kinetically-performed juicer, DUMB AND DUMBER TO – arriving 20 long years after its predecessor – has lost all the heat, vitality and punch of the original. Recycled jokes, badly-written jokes, and simply an overall feeling of mean-spiritedness permeates this dud. Whereas the original had some real emotional passages and connections, this shallow tard-fest doesn’t allow Lloyd or Harry any real feelings. They just coast through the movie doing stupid things – which is fine for a comedy, except this time, it’s more cruelty than humor. When you comedically hurt someone who can fight back – like Riggle’s character – it’s funny, but it is completely the opposite effect when your stupidity is aimed at the defenseless (allowing a cat to eat all their blind neighbor’s exotic birds – neighbor Billy played by the same boy who played him as a little kid 20 years ago, Brady Bluhm; throwing trash wherever they want to; Carrey laughing at a woman’s Chinese accent, disparaging the scientific ideas of young students, etc.).

The ages of the protagonists doesn’t help. Now don’t get me wrong, Carrey and Daniels are still energetic and look quite youthful for their 52 years and 59 years respectively, and they are both extraordinary actors – but they don’t sit as comfortably in these roles as they did 20 years ago. It feels forced, especially after seeing Daniels in such respected roles (THE NEWSROOM, STEVE JOBS, THE MARTIAN, et al), and Carrey in varied personality modes (the bestial KICK-ASS 2, the mundane MR POPPER’S PENGUINS, the classic Carrey stylings in BURT WONDERSTONE). Maybe it’s us. Or maybe this kind of physical comedy is a young man’s game. Rob Riggle’s relative youth helps in this respect, and his personality complements Carrey’s and Daniels’ well.

I find this very sad to say, but Jim Carrey – once the reigning king of comedy – has lost “it”; that indefinable spark that made him a force of nature, a cataclysm of hilarity. Once, all it took to drive a joke was to pull a goony face; now, all the mugging in the world seems tired and over-used. In the original, Daniels, in what seemed like miscasting, surprisingly held his own alongside the bombastic Carrey, however, his character seems even more forced than Carrey’s here, and there is much less chemistry between the two.

Kathleen Turner is Penny’s birth mother, and quite game about her ogre-like appearance, taking it on the double-chin with a multitude of old and fat jokes.

As the movie rolls on, it gets sad and sadder. Until it fizzles out with a twist on the climax that is lame and lamer. The outro credits show so many snippets from the first film, we get the impression the filmmakers (directed by the Farrelly Brothers, written by four other guys who obviously don’t give a fuck) have no confidence in their current film. After getting to this point, we can see why. There is a post-credits scene teasing DUMB AND DUMBER FOR.