The movie Shia LeBeouf makes when he’s in between blockbusters. Still as dumb. 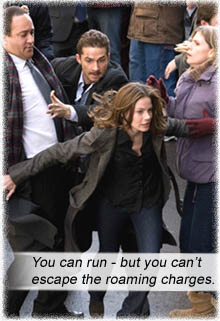 EAGLE EYE. Kinda juvenile title, no? After watching the movie, it fits. Shia is Jerry, a shiftless copy boy (sorry, “copy associate”), who one day discovers boxes of CIA-type weaponry delivered to his shoddy apartment (that he is behind the rent on, of course). He has just returned from the funeral of his twin brother, who was the achiever, the military hero, the favorite son. The clichés mount as we discover Jerry’s directionless life took him backpacking around the world to end up at his dead end job. And if you think the clichés end there, you don’t know action movies….

Suddenly – a phone call. A woman’s voice telling Jerry to leave the building in 18 seconds before the FBI bust in – think Neo in THE MATRIX. Only dumber.

In another part of town, Rachel (Michelle Monaghan), whose son is on a train to camp, also gets a mysterious female phone call, threatening to blow up her son on the train if she doesn’t follow instructions.

Rachel and Jerry are thrown together by the monotonal female voice, as they evade federal agents, led by Billy Bob Thornton and Rosario Dawson, who is usually sparked, but here, as vapid as Ethan Embrey (playing Billy Bob’s overacting aide).

Set in Indiana, directed with verve and no feeling by D.J. Caruso (taking pointers from monotonal machines again, D.J.?), written by John Glenn, Travis Wright, Hillary Seitz and Dan McDermott (who have all had way too much caffeine), EAGLE EYE alludes to Asimov’s Robot Visions (where robots are always getting too darned cognizant for their own good) and is also a commentary on our surveillance-soaked society.

Nonsensical and action-packed, with great effects (car crashes have especially become very realistic in the last couple of years in cinema – but, being an American movie, cars simply MUST flip over while crashing), EAGLE EYE serves absolutely no purpose when we discover the truth behind the monotonal female phone calls.

Not another supercomputer that thinks humans are illogical and don’t deserve to live! When are humans gonna learn to unplug these things overnight so they don’t become sentient and get influenced by video games and heavy metal music?

The female voice emanates from a military supercomputer (made up of golden globes – hint hint… fat chance!) that is trying to put the world back into logical balance by making Jerry and Rachel assassinate the president – ironically, in the most illogical way possible. You see, the supercomputer has total control over everything – GPS, cellphones, security cams, ATMs, e-mail, all mechanical devices; it can locate Jerry and Rachel via anything electrical, it can eradicate pursuers, raise drawbridges, blow up trains, plan robberies… it even sends our heroes to that field with the telegraph wires in the finale of SE7EN and – like SE7EN – a truck drives out of nowhere and delivers a package to them, whereupon the supercomputer kills the messenger by downing power lines onto him.

So why doesn’t it assassinate the president on its own? Why go through the convoluted machinations of involving humans who bring with them the human element of screwing up royally?

The supercomputer keeps telling Jerry “No questions,” until it needs to answer questions for exposition, then it’s happy to belch information regarding Jerry’s twin, the CIA, the Marines, Ethan Embrey’s nil prospects for an Academy Award, and even Dick Cheney’s secret death squads, if gutless Obama would ever take notice and prosecute.

When the supercomputer exposits, showing off for no reason, pulling up info from Jerry’s birth to his present, I once again get infuriated that the Amerikan Military loves portraying itself as all-knowing, all-seeing, all-powerful – yet pretend they cannot find Osama bin Laden. Not that finding OBL is a feasible option – we all know the government knows where he is, but it is more politically judicious to retain his dynamic as a metaphor for fear.

In a movie this vapid and thoughtless, we can rest assured the president won’t buy the farm; we can also rest assured there will be plot holes that no romantic ending can cover, but which they’ll try to distract us into thinking they covered. Like the ending of I, ROBOT, the supercomputer is brought down by a black guy and a hot chick bodily throwing themselves against it with sparks flying to signify damage, instead of working sensibly with a keyboard and the Geek Squad.

When Rachel and Jerry were trying to elude pursuit in their first scene together, Jerry berates Rachel on her untrained gearshifting, in a car which the computer told her to commandeer. So… the computer knows everything about everything – but it doesn’t know she can’t drive a stick?

I got my eagle eye on you, supercomputer…