What you can do with a stolen script and one shaky camera.

Someone decided to blatantly rip off E.T. THE EXTRA-TERRESTRIAL and SUPER 8 – two excellent movies – and mash them together with a wobble-cam. Presto! The annoying shaky-cam experiment called EARTH TO ECHO: extraterrestrial alien trapped on Earth; hooks up with kids who help it avoid gubmint spooks and rebuild spaceship; takes off in grand finale. 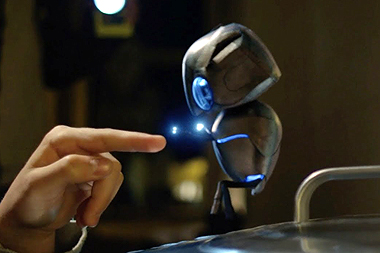 Writers Henry Gayden and Andrew Panay and director Dave Green try desperately to disguise this movie’s lineage by ensuring we cannot see the movie through their stupid stupid stupid filmmaking technique. You see, EARTH TO ECHO is one of those annoying handheld excursions trying too hard to be au courant. But Mr. Green, you’re not hip, you’re not cutting edge, you’re not innovative, you’re just irritating. The only visuals are from a supposed handheld vidcam that the principal actors pass amongst themselves, or attach to the handlebars of their bikes, or set up on a table. Whatever it is, the thing just WON’T run out of batteries and end my pain. It’s exhausting trying to watch this motion sickness debacle; it’s as if your eyes are running a marathon. I hate this handheld crap!

Worse than the cam-shaking idiocy in CLOVERFIELD, this method of filmmaking specifically designed to induce migraines ruins what could have been a below-average alien adventure story. Or this might have been the best movie in the world, but who can tell with all that eye-wobble; imagine trying to watch CLOSE ENCOUNTERS if it was filmed on an iPad by ADHD teens.

And when we switch to the alien’s viewpoint, we fall out of the movie completely as we ask ourselves: If this film is meant to be totally from the kids’ point of view – which explains the stupid stupid stupid handheld approach – where did they get access to the alien’s computer-enhanced visuals? Did it save its visuals to mp4 format and stream them on Hulu? Hey, that’s great! An alien can easily interface with a Mac, and here on Earth, we can’t even get a pc to read our docx files.

In a small Midwestern American town, Teo Halm, Astro and Reese Hartwig play three BFF tween boy-childs who discover strange disturbances on their cellphones. Due to a highway development tearing through their neighborhood, two of their families are moving away and so all three decide to spend one last adventure-filled night together in the desert tracing the cell disturbances. To alleviate the sausage-fest (or is it weenie-fest at this stage?) and to bring it more in line with SUPER 8, one of the movies it is ripping off, movie adds Ella Wahlestedt, a blond smoothie whom the boys all have a crush on. As if to thumb its nose at the superior SUPER 8 (which featured young Elle Fanning performing a magnificent crying scene), Ella’s first scene in ECHO is performing a fake crying scene to get the gang out of trouble.

The boys discover a little blue-glowing, floating, owl-like alien that communicates with them through their phones. After introducing themselves to the alien, one of the boys decides to name the alien Echo. Why? Because it beeps in reply every time they “beep” at it. So the boy gazes at the alien and tells it, “Your name’s Echo.” Who said that was okay? The unmitigated hubris! You have NO IDEA what this thing’s name is! 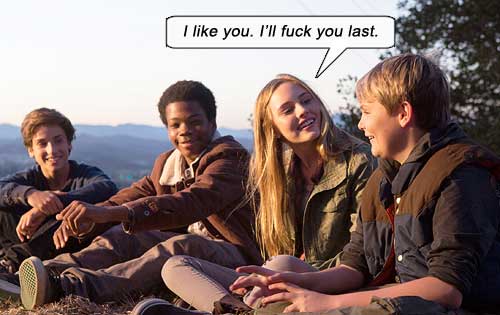 At many points, we throw up our hands and decide to tolerate the movie – then it goes and does something else stupid stupid stupid: