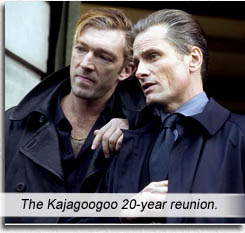 Oh, it promises all that and more in the breathless trailers, but when we examine Steven Knight’s screenplay, we realize something director Cronenberg does not – EASTERN PROMISES makes absolutely no sense.

Anna (Naomi Watts) is an American nurse in London, who finds a Russian diary on the body of a 14-year-old mother who dies in childbirth. To find any clue to place the baby with its next of kin, Anna asks her Russian uncle (Jerzy Skolimowski) to translate the diary; she also follows the trail of a business card found in the diary, to a Russian restaurant owned by Semyon (avuncular, yet sinister, Armin Mueller-Stahl).

These early scenes do well to create an aura of uneasiness around the Russians. And as Anna gets closer to the truth, her life is in greater jeopardy. It falls apart just about the time we see Viggo stark frontal nekkid. You heard me, ladies…Semyon betrays Nikolai to the Russian Mob on the pretense that Nikolai is Kirill, his son who was ordered sacrificed. But Nikolai dispatches the assassins in a nude steam room scene that can’t GET any steamier for the ladies, with his magnificent ballsac doing most of the work.

There are two big “reveals” in EASTERN PROMISES. The first is Viggo’s magnificent ballsac, the second is that Nikolai is a cop. Undercover. (Well, not in the steam room…)

And the movie is officially euthanized by its own makers.

After all the research that went into the Mob tatts on Viggo’s body, after all those killers skulking around after Anna and winding us up with their scary accents, now we don’t have to fear for her any more – we know she has a protector in the form of Aragorn! How could any Russian cave-trolls get near her now?

Cronenberg makes a great-looking film (but that’s probably more attributable to his cinematographer, Peter Suschitzky), but I’m not letting him off the hook for the absurd twists that negate the whole reason for us to be concerned with these people’s fates.

Like his A HISTORY OF VIOLENCE, Cronenberg’s story does not seem to take place in any real world we know. Wouldn’t the Russian Mob – after sending two assassins to kill Kirill and failing – send more assassins to finish the job? And when they find out Nikolai is not Kirill, wouldn’t they go after the real Kirill? Wouldn’t they sanction Semyon for trying to bait-and-switch them? And whether Nikolai is Kirill or not, wouldn’t they send someone to finish the job while he lies prostrate in hospital? None of this happens. It’s Cronenberg’s world of No Consequences.

The gore in EASTERN PROMISES is not gratuitous, but when it comes, Cronenberg never flinches. The naked shower battle is intense, with glinty knives scarring across backs and stabbed into eyes, yet Cronenberg simply uses gaping wound holes to distract us from the gaping plot holes.

Firstly, it’s not a child prostitution “ring” if just one fourteen-year-old girl was raped; it’s not a Russian mob war if there are no followup assassination attempts or revenge killings; and Anna suddenly seems completely safe and therefore irrelevant; the baby becomes a McGuffin, Kirill becomes homosexual, and Semyon is simply arrested by local police.

After showing us the hard and heavy Russian underculture, Semyon’s arrest is like Michael Corleone getting a speeding ticket; uh, guess the Russian gangs didn’t want to interrupt official police business.

In a final shot, Nikolai is seen taking on the Godfather role in Semyon’s stead. So an undercover cop who is trying to bring down the organization is now – running it?

And all this while I thought There IS No Keyser Soze.