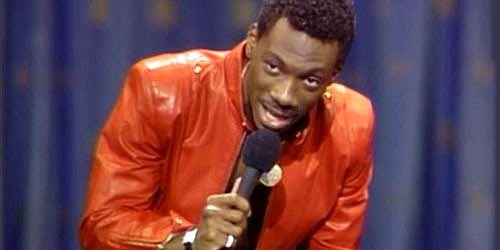 “Let me just stoop down to a level y’all will understand.”

DELIRIOUS is anything but. Unless it’s saying you have to be delirious to think it’s comedy of the highest order.

Eddie Murphy’s first standup special is very funny, yes, and it provided a wealth of quotes for me and my cucumber buddies when it first hit the screen in 1983. But in retrospect, it’s just a bunch of basic, schoolyard jokes; simplistic, innocent humor sprinkled with excellent mimicry and a conviction that belied its lack of depth. There’s nothing incisive here, nothing biting or insightful. Nothing you can take to the bank. You can’t point to any observation of Murphy’s and marvel at the way his mind is working. Because it ain’t working. It’s juvenile dancing to “I got some ice cream!” and singing about G.I. Joe investigating farts. There is no sociological meat at all. DELIRIOUS is simply devoid of anything weighty.

I didn’t know that back then, and I didn’t care. How did this feature achieve the status it has over the years? Because DELIRIOUS was not released in a vacuum. If this was Murphy’s only output, he would never have made it. However, in the context of the times, Murphy’s synergy was red hot – a cast member of SNL since 1980, constant standup tours, his left-hook debut film had been released, 48 HRS. (Dec 1982), then another powerful starring role in TRADING PLACES (Jun 1983). The TV special DELIRIOUS would hit in August 1983 amidst Eddie Fever. And while DELIRIOUS slowly spread around the world via VHS (which is how I viewed it in Australia), BEVERLY HILLS COP would smack us down in Dec 1984. There was no stopping this rocket ride.

As with Cosby, delivery is everything with Eddie. Because – like Cosby – the content is watery at best (Mr. T being gay, “that new AIDS shit,” auntie falling down stairs), irrelevant at worst (the ice cream man, his father’s drunken tirades, poltergeists and white people). Drunken father bit is where Eddie most reminds us of Cosby. Remove the 1,057 instances of “motherfucker” and it’s Cosby telling his lame family anecdotes that aren’t quite funny, but are made funny by the man’s artful comedic delivery.

Murphy’s early movies took off where Poitier’s left off. “Nigger with a badge” (from 48 HRS.) is a cataclysm, a tectonic shift that we can still feel today when we view it. But I don’t think Murphy’s standup will stand up to time. As the years go by, it is losing its potency and relevancy. His first routine is about “faggots” looking at his ass – that’s the term he uses, in all innocence, because it was acceptable as a gag back then. He doesn’t say “gay” – he says “faggot” (Mr. T as a faggot, faggot patrol), and it’s jarring in 2015. But Murphy is not a bigot – just a product of his times.

Another sign of the times is the way Murphy asks, “Remember in the old days when you could beat up a woman? Remember that shit back in the 20s when guys would smack their wives [and the wives would simply take it]?” He says this as if reminiscing nostalgically about good times. Unlike Chris Rock (who, a few short years later, would maintain he would NEVER hit a woman), Murphy readily admits to slapping some girl, and then makes the girl look unbalanced when she suggests to him in a sinister way, “Why don’t you just go to sleep now…” Yes, it’s a joke, but at the expense of the girl’s respect and equality as a human being. If he tells this joke today – in this same manner – they’d burn the theater down with him in it.

I will again compare this giant to his worthy successor. Chris Rock rails against racism in all his bits, coming at it from every possible angle, finding it in the smallest gestures of The Man, but in Murphy’s bubble back in 1983: “Racism ain’t as bad as it used to be.” When we see him in his custom leather traveling in private jets surrounded by bodyguards with monogrammed leather jackets, we understand what he means: there really ain’t much racism in private stretch limos.

Me and my drummer friend would quote Eddie non-stop in our everyday lives, “I wish I WAS a slave!” “You can SMELL it!” “I got some ICE cream”… and I realize why we loved him back in the day – because we didn’t yet know of Lenny Bruce or Pryor or Carlin.

One thing I’ll say for him: Murphy is a prime impersonator. Because he’s a good-looking guy and a movie star, we don’t equate those elements with impersonator, but he nails everyone he does: Mr. T, Michael Jackson, Cosby, Stevie Wonder – we’ve seen this talent on SNL. And he has the crowd from the get-go. No one is here to heckle; they’ve paid good money to see this rising hot star and they are here to LAUGH (although he does lose them a little with the drunken father bit, which is basically an extended impersonation of his father (someone we don’t know, so can’t judge the impersonation) chastising his family during a barbecue).

Murphy was 22. At the peak of his powers. He tells us quite forthrightly he’s in his sexual prime, pussy being hurled at him from all directions. He’s right. Look at the guy: he can’t be more sexual panther, striding around the stage (the technique that Rock would use to great effect) in that leather so tight we can hardly breathe, not one follicle on his body-shaved torso, his package rudely bulging, his booty bangin’ in fire-engine red, his hair tight and shiny (is that Soul-Glo?). He’s a walking sex machine, pheromones cascading offstage like spiraling nematocysts, electrifying the charged atmosphere, drawing us in like a velvet spider, coaxing, cajoling, hallucinating, only to take us roughly from behind.

Chronology of Comedy:
How Eddie Murphy conquered the world.
(only formative product is listed)