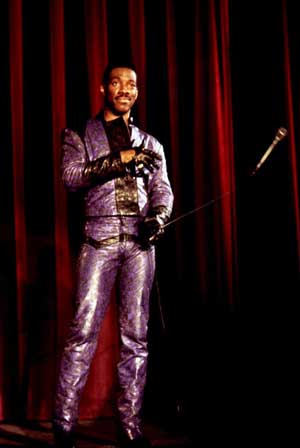 I learned all I need to know about California divorce courts from Eddie Murphy.

In his second standup special, RAW, Murphy has matured slightly, taking on meatier issues than the fluff he posited in his 1983 standup film DELIRIOUS. “Half!” is one of his most enduring bits, as he outlines what a woman is entitled to when she divorces you in California.

RAW opens with a “flashback,” showing Eddie as a kid during a family gathering, telling a mildly dirty joke – with Samuel L. Jackson playing his uncle, laughing uproariously over the disappointed scowls of Eddie’s parents.

Upon rewatching the two old Eddie Murphy standup specials (DELIRIOUS and RAW) I kept asking myself what made them the juggernauts they are regarded as today, and Murphy’s obvious mandingo sexuality was part of the equation.

Murphy’s opening volley is not too promising as he spends a few minutes talking about celebrities’ reactions to DELIRIOUS (Mr. T looking for him at parties, etc.), and how he is perceived in foreign countries (Mr. “Fuck-You” Man!). Then, thankfully, it gets much better.

If we thought we had a wealth of one-liners from DELIRIOUS, then RAW delivered a truckload, dumping them onto our heads faster than we could commit them to memory to spout at our friends incorrectly: “You don’t OWN me” “I don’t see no RINGS on these fingers!” “What have you done for me LATELY?” “Same old crackers” “She’s special…” “Why don’t you shake your ass on home?” “We made good LOVE!” [voice of Mfufu, his African bride] “EDDIIIIE!” [voice of Italian after watching ROCKY] “Alright, Rockaaaaay!”…

His impressions are still exacting, his comedic timing still impeccable, and now – with added CONTENT. Yes, with RAW, Eddie Murphy at last gets real, and his “observational” comedy finally gets down into the weeds to say something not just funny, but sociologically biting. His bit on California marriage will forever stand as a young man’s protocol: “If you enter into a marriage and build 300 million together, you deserve half, but [Johnny Carson] already had 300 million. I hear ladies saying, Well, you can’t put a price on what *I* do, but ladies, when you marry a man with 300 million, you’re not a regular housewife; you don’t have to clean, cook, get a job, nothing! All you have to do is fuck your husband!” He ends the bit decisively proclaiming that no pussy on Earth is worth $150 million. Social commentary, ethics, comedy. Now this is worthy of a superstar.

And his acting prowess has improved. Listen to his tone when he disclaims infidelity, “It weren’t me.” He yells as he plays the woman’s role, then suddenly switches gears to the calm man’s role, “Weren’t me.” It doesn’t even sound like his voice; we’ve caught this lover red-handed but we see the conviction in his face, hear it in his subdued voice, as he maintains, “Hey… weren’t me.”

Well, maybe it wasn’t him…

Yet there are still some shallow bits that I find hard to believe. Murphy doesn’t see the irony when he tells of his younger days as an unseasoned comic with a lack of material, falling back on doing jokes about shit, mimicking Pryor: “What does that chunk want?” Which is actually a funny bit, but the irony is that he is implying he’s progressed, and has mature material now. Then we get the tiresome McDonald’s bit, where his mom fries a slab of meat in lieu of a McDonald’s burger and makes him eat it with the neighborhood kids’ singsong taunts, “We got McDonald’s, we got McDonalds!”? So, because he’s not doing Pryor’s accent any more, this is progress? I like “What does that chunk want?” better.

How tragic when Murphy mentions Ennis Cosby, Bill Cosby’s son. In Murphy’s bit, Ennis was a teenager buying a ticket to Murphy’s show, with Bill incensed that Murphy was swearing so much, influencing his son, “You can’t say filth flarn flarn filth!” Ten years later, in 1997, Ennis would be tragically murdered.

He relates getting beaten up, calling his mother for support, and his drunk father answering the phone…

Apparently the drunk father routine is a fave. It elicits applause – when it starts. Crowd remembers it nostalgically from DELIRIOUS, but then it just goes on… and on… and on. The laughter dies down – but Ed keeps going. It’s uncomfortable, especially since we are looking past the “jokes” his father character is making to the fact that Murphy’s father was a violent and abusive alcoholic. It’s pathos and repressed anger and childhood pain; in fact, the last ten minutes of the show is Eddie holding an imaginary phone to his ear, playing his drunk father, admonishing young Eddie on the phone. And it’s just a mean, unnecessary episode. And then the show ends! With Eddie holding his hand to his ear screaming as the character of his father. Screaming about the privileges his children have, while he had to eat toys as a kid to survive. Eating Monopoly and Etch-A-Sketch. Really? Is that from a universe where eating toys is a good gag? Wearing toys to school, wrapping Twister games around him as clothes… None of this is remotely funny, as a smile freezes on our faces and we pray to Pryor that Eddie’s got a solid punch to end this bizarre walk down pain lane. Instead, his “father,” still with phone to ear, ends by singing the Slinky song, then “Bye bye, I gotta go.” Oh no, you don’t Eddie! You can’t possibly leave on this sour note! But he does. It’s a pity this cannot be fixed or edited with some better content from another show. Or just cut short ten minutes. Where’s George Lucas when we really need him?!

It’s like director Robert Townsend had only this one show to edit from; like Murphy hadn’t done any other shows in that costume and on that stage set; like this is raw footage that has to remain in this 93-minute feature because there is absolutely no other content to fill the time.

Is that what RAW really means?…