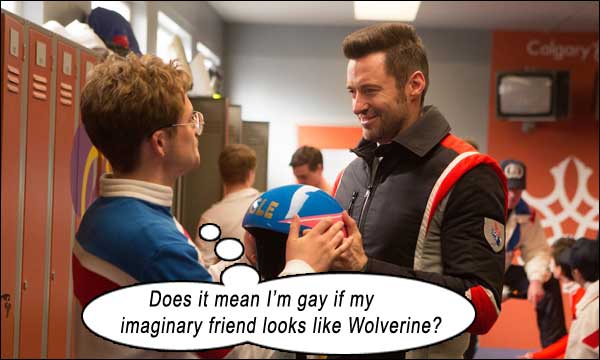 While the real Eddie is a fan of the film, he said that “only about 5%” of EDDIE THE EAGLE is a true story.
–BBC News

EDDIE THE EAGLE is a tribute to the world’s greatest ski jumper… loser.

Oh, so we’re making inspirational movies about losers now? What next, the guy who didn’t even qualify? The guy who fantasizes about winning? The guy who Photoshops his face onto the winner’s picture?

I guess we take EDDIE THE EAGLE in the same way we took ROCKY (1976) – the story of a TRYER, not a winner; a man whose heart enabled him to “go the distance.” Eddie Edwards would overcome great odds, to end the 1988 Calgary Olympics ski jump event in, uh, last place.

Inspired by the real life exploits of Michael Edwards (aka “Eddie” Edwards, aka “Eddie the Eagle”) the movie goes to great lengths to make this already unique tale nothing but a cookie-cutter “inspirational movie.”

In Britain, the young Eddie (played by Tom and Joe Costello) dreamed of being in the Olympics. His mother (Jo Hartley) is supportive, and his father’s (Keith Allen) disdain is quite funny (a fine line walked by Allen, who might have turned it into a mean performance). Against an Olympic Committee (headed by Tim McInnerny) and his clumsiness and non-existent finances, mid-twenties Eddie (Taron Egerton) finally makes it to the training slopes of Germany.

After one especially bad landing, the guy who smooths the ice gets off his tractor to examine Eddie. We see the ice guy approach in a shot from the ground up: his legs, his crotch, his torso—oh, it’s Hugh Jackman. There’s no mistaking that crotch.

At this point, it’s pertinent to mention the real Eddie Edwards has stated this movie is “about 5% true” – which means that 95% ISN’T true. EAGLE is a good film, one of those afternoon diversion clichés that doesn’t harm anyone or garner any great accolades, much like Edwards himself, but I do not see its ultimate point. Because the filmmakers (writers Sean Macauley and Simon Kelton, and director Dexter Fletcher – he was “Soap” in LOCK, STOCK AND TWO SMOKING BARRELS) had to insert so much fiction into the story, thereby undermining the very message of their movie. Because we are so used to movie tributes being about “winners” they try to wangle this guy as a winner in some fancy metaphysical roundabout way.

The new HARRY MET SALLY moment in film is surely Hugh Jackman pretending to fuck Bo Derek, as he explains to Eddie “how to land,” taking on the role of coach so that novice Eddie won’t break his neck. (But, as in all movies of this nature, no one talks of payment, or at the very least, exchange of services. The cookie-cutter, drunk, burnout-who-used-to-be-great Peary just seems to hang around altruistically, even spending a ticket to fly to Calgary, Canada to surprise Eddie with his presence. The least he could do is work on Eddie’s shitbox van – we saw him tinkering under his musclecar earlier. Yup. That crotch.)

So now we can be sure these lines are fiction: The Norwegian coach (Rune Temte) asks Eddie, “Have you been jumping long?” Eddie: “Since yesterday afternoon.” Why do movies purvey this ethos of easy gains even whilst promoting that if you work hard you’ll succeed? This movie ends up being the “Learn to play piano in five easy lessons” bullshit; it’s the KUNG FU PANDA ethos of being fat and out of shape and training for one montage and becoming as good as the masters. STOP THIS BULLSHIT IN MOVIES!

After one practice jump on the 40 meter slope, Eddie looks back and says “I think I’m ready for the 70 meters.” No, you’re not. STOP PROMOTING THIS MALARKEY.

We can feel the clichés being checked off, like a skier slaloming through trees with every branch hitting us in the face: The father who poo-poohs the sport and eventually embraces it, the supportive mother, the burnout trainer who was once a champion and former X-Man, the official who tries to ban him from competition, the rival team who laugh at him, his own teammates playing tricks on him, his beg-borrow-steal ethos just to be in the sport, the crowds warming to him, the orchestra swell, even playing Van Halen’s Jump for Eddie’s final 90-meter non-record-breaking jump. How gauche.

Christopher Walken seems entirely miscast as a former coach who trained Peary. It seems appropriate that Walken and Jackman – both the most recognizable Hollywood faces – are in fact, Hollywood inventions. Both never existed.

Look, kudos to Eddie Edwards, but this movie reflects the new hippie dynamic of rewarding everyone just for turning up. But that’s not how the world works. This movie is living proof of that. Think about it: a multitude of young guys tried out for the role of Eddie. Only one of them made it. Was each of those auditioners given a role in the film or sent away with a trophy or a payday? So we’ve established that not everyone can be a winner. Because that’s not the way the human species is built. We do not owe the existence of our lives to losers, but to the winners of the evolutionary struggle, winners of the breadwinning struggle, winners of the struggle against disease, against the elements, against society itself.

Probably the only truth here are the results of Eddie’s Olympic jumps, and the inexplicable crowd reaction, taking him to heart for some strange reason. Maybe it’s because, with all due respect, Eddie did in fact look retarded. He’s not exactly the Hugh Jackman of ski jumping. And world audiences were applauding whom they thought was competing way above his abilities. He was, but it wasn’t because he was retarded. He was just a loser.

The ROCKY series eventually caved to convention by making Rocky a winner, because – let’s face it – how long can you remain a loser without everyone abandoning you? Maybe Eddie did fly like an eagle – but he landed like a turkey. 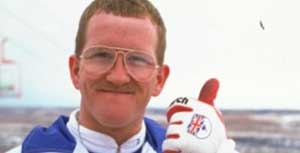 REEL vs. REAL
Movie versus the real Eddie Edwards story.