What a stupid name for a movie! Did they think Steven Seagal was the lead?

Notwithstanding yawnful “sinister” attempt at kickstarting Mouthy Mel’s comeback tour, EDGE OF DARKNESS might have been a powerful film, raising questions about unethical corporations and their impunity when backed by government, had it not copped out with a simplistic denouement, using bullets instead of brains. (ROCK STAR comes to mind, as does RANSOM and SHOOTER, movies with that same thoughtful buildup and thoughtless letdown. All these movies go to the edge – and end up in darkness. And not in that good way, when your girlfriend blindfolds you and doesn’t tell you how she’s doing that thing that you like.) 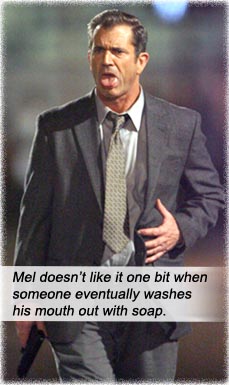 Mel Gibson is lonely widower cop Thomas Craven, whose visiting daughter Emma (the lovely Bojana Novakovic, looking like a young Teri Polo or Alison Eastwood) is gunned down in the movie’s first minutes in a brutal, sudden slaying. And Mel’s infamous “tragic face” kicks in. Movie is lookin’ hard cool.

Craven dealing with Emma’s death are the movie’s best moments. When he washes her blood off his hands, we can see in his tragic eyes what he is thinking as he watches the bloodied water drain: these are the last vestiges of his daughter disappearing down the sink. But soon the movie will turn “detective” on us, and though this ride is interesting, by involving a government coverup, it cannot be resolved effectively.

Craven thinks he was the target of the shooting, and it takes some strange developments for him to realize Emma is the victim of a government conspiracy: he picks up her effects and finds a Geiger counter; a lock of her hair from the coroner’s table reads as radioactive; a videotape of her testifying that her employer was involved in illegal nuclear activities and coverups…

Ray Winstone (yeeees, my son!) visits Craven as a strongarm scare tactic; a facilitator with a heart. He pops pills for a chronic disease that is slowly killing him, and finds himself in a strange love triangle with Craven and his evil corporate employers: he empathizes with Craven’s desire to bring the murderers of his daughter to justice – yet we know from his demeanor that those are the very people who employ him.

Danny Huston is the CEO of the Big Bad Corp that Emma worked for. Craven visits him and is stonewalled with an ominous cool from Huston worthy of Kevin Spacey.

Directed by Martin Campbell (who directed the 1985 British mini-series of the same name, also THE MASK OF ZORRO, CASINO ROYALE), written by William Monahan and Andrew Bovell (from Troy Kennedy Martin‘s original stories), EDGE OF DARKNESS would have more impact in a world where wrongdoing is not so passé; where there is actual liability and where people pay for their crimes.

Craven might threaten to release Emma’s video to the media, but what good would that do? Unless you live in that movie world where corporate guys go to jail and get ass-raped for their crimes. In our real world, exposing evidence to the media is now a meaningless threat, as the media continues to expose Bush-Cheney war crimes and countless felonies (with the two douchebags themselves justifying and lauding their high crimes at every turn), yet the sitting administration refuses to besmirch the aura of the presidency with supposedly “petty” indictments of the “past.” Gutless whores!

When Craven speaks to a senator, trying to piece together a letter related to Emma’s death, he is also stonewalled.

Craven gets in so deep that a hit is put out on him – by the government, of course. A friend warns him, “It isn’t what it is. It’s never what it is. It is what it can be made to look like.”

In our real world, when Joe Wilson reported back to the Bush administration from Niger that there were no WMD, Darth Cheney didn’t like that truth one little bit, so continued to torture people until they heard the truth they wanted, then “leaked” the identity of Wilson’s CIA undercover wife, Valerie Plame. And made it look like Wilson and Plame were wrongdoers in the Fake War On Terror.

Movies like EDGE OF DARKNESS, where government criminality is embedded in the functionality of society (as in THE INTERNATIONAL or SYRIANA) are becoming ridiculous because they resolve their wide-reaching problems by killing a few guys in the third act. Like that will grind the world-raping machine to a halt.

In the movies, the fantasy crimes of villains used to seem so outrageous – but now the real world criminality is so much more obscene than anything dreamt up by fiction writers.

We now know that Justice wears a blindfold NOT because we are all, politician and layman alike, subject to the same laws – but to AVOID SEEING JUSTICE. Like the government she represents, she’s a gutless whore!

Craven is conveniently poisoned and starts slowly dying – so he can go judge-jury-executioner on the bad guys without any consequences; and due to Mr. Winstone’s chronic condition, he too can cap some crooked senators and CIA officials without facing lawful repercussions. Doesn’t do anything to stop the corporate crime – but it leaves us with a sexy feeling of closure.

Speaking of sexy closures, both Craven and Emma, as ghosts, walk out of the hospital together… I kid you not, Movie Maniacs. And I can’t help thinking how annoying it is that clothes have ghosts as well, as I gaze torridly upon Emma’s retreating pearbottom ghost-jeans and admire her tight haunches, as women do the same with Mel’s retreating ghost-pants… as they both walk into the light.

It’s about to edge into sexiness in heaven.