Dying in battle is the new way to meet chicks!

Right off the bat, EDGE OF TOMORROW involves time-travel, so if you’re one of those chrono-geeks who’s gonna sit there with your slide-rule and try to finger the anomalies, best you leave right now…

The Future. Extra-terrestrial aliens have attacked, and Earth armies are on the defensive blah blah backstory. A desk-jockey officer (Tom Cruise) is forced into battle, and accidentally gets “alpha-alien” blood on him, discovering that every time he is killed, he time-loops back to the day before the battle. He retains all his memories and learned abilities when he loops – otherwise, where would the fun be? – and gradually becomes such a skilled warrior princess he is hired for MISSION: IMPOSSIBLE. 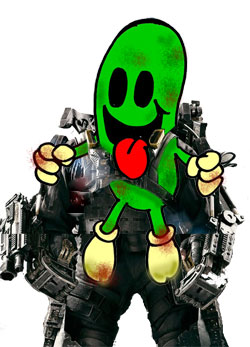 Cruise is officer Cage (because the name officer Dynamo Thunderstrike was taken), who is ordered inexplicably to the front lines by a hard-nosed general (Brendan Gleeson, last seen with Cruise in MISSION: IMPOSSIBLE 2). “Inexplicably” because Cage is a PR man who successfully recruits troops for this failing war; he has no combat experience, and would be a liability to vets on the ground… also No Gays In The Military, right? So how did…?

That being said, let’s talk about the ongoing tribal love America has for the military-industrial complex. Again the military is represented as totally bitchin’ warriors who don’t give a fuck because they’re Just Too Kewl; Combat is Heroic, as is Dying For Your Country – even though all those things have nothing to do with heroism. But these memes have festered so deeply in American culture that Cage’s aversion to combat is regarded as cowardly (when it is not!); he is resented by his fellow grunts (just because he wants to live not die), and we find ourselves resenting him as well! When he is the only smart one there!

Hilariously over-cheesed Bill Paxton is Master Sergeant Bigdick, who glibly dismisses everything that isn’t military, throwing Cage onto a beach amidst outtakes of SAVING PRIVATE RYAN, whereupon Cage loses his helmet quicksmart due to contractual reasons of seeing Tom’s pretty mug. Wardyke and love interest Emily Blunt also has that clause in her contract, as she’s taking shrapnel every which way, except on her pretty unhelmeted head.

Blunt is Rita, a soldier lionized as The Angel of Verdun for her combat willies. Cage meets her on the battlefield as she wields a helicopter tail-blade as a weapon. Yup, she’s badass all right – and the only person who knows why Cage keeps doing Bill Murray. She also possessed the time-loop faculty for awhile – until a blood transfusion restored her to one-life-to-live.

A Marvel Team-Up in the stars, I sense. Into countless futures, where it seems Rita and Cage only kiss but once. Is he coming back just to get to Second Base?

Noah Taylor (yay!) (last seen as “tech support!” with Cruise in VANILLA SKY, 2001) explains the enemy aliens – annoying formless calamari tails from THE MATRIX – called Mimics: “pieces of a perfectly evolved world-conquering organism.” The alphas can “reset the day” whenever they die, and in that manner, slowly figure how to conquer planets.

Thusly, every time Cage dies and comes back, he is exponentially better and better (insert optional gag here: In Bed). Hungry for cliché? No problem: EDGE follows the same curve as all time-loop movies – the first few times, shock; then comedic asides with his military unit; the third stage of his looping is loving and losing, never consummating (yep, he’s aiming for Second Base alright!); ultimately, he reaches tragic, where he doesn’t care anymore, watching everyone he knows die as he stone-facedly continues his quest to live-die-repeat and slowly tease out a method to kill the atom heart mother.

Profound, as we realize that if you know you cannot die, and become that jaded and tired of life, what can you do if Life keeps clinging to you, except drag your feet forward into the world? Such is the soul-crushing weight Cage finds himself burdened with.

A cliché title about cliché time-loops with cliché characters outfitted in superfluous exoskeletons that are just cool clichés. Yet we forgive, because this GROUNDHOG DAY ripoff is constructed purely for careening our adrenaline, and careen it does, executed with verve and dynamism by director Doug Liman (who did the good BOURNE movie); excitement, action, humor, snaking twists and turns (by the writer who twisted THE USUAL SUSPECTS, Christopher McQuarrie), and efx that augment the fantastical story (from a novel All You Need Is Kill, by Hiroshi Sakurazaka), rather than divert from its shortcomings.

Most moviegoers are sophisticated enough to understand sacrificing good science for good storytelling, but I’ll say this again for the laity: EDGE OF TOMORROW is not written to comply with time-travel rules, but to comply with Hollywood Screenplay rules.

EDGE might seem to have a Happy Ending – but think carefully: that enigmatic final scene (a la MANHATTAN, CAST AWAY, STRAW DOGS) could also be construed as tragic. Sure, he may get killed a coupla times, returning to “fix” the circumstances of his death, so that he can continue living past it. But then, when he dies a natural death, will he keep “repeating” as a 90-year-old in his sock-smelling room at the retirement home, hooked to an oxygen tank and drooling mucus, until he dies again? And repeats?

You mean we’re going to be watching Tom Cruise movies for all eternity? Oh Christ! Can someone go back to 1955 and stop Biff giving the Almanac to himself?