Will Ferrell is funny. This movie is not.

In ELF, Ferrell is Buddy, a normal-sized human raised by Santa’s elves (hence, thinks himself an elf), who is sent out into the world ostensibly to find his real daddy, but in reality to get his clumsy, over-sized bollocks out of the tiny toy factory. 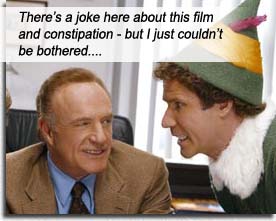 In Christmastime New York, still wearing his elf getup, he discovers his father is Sonny Corleone, which must make him Andy Garcia. As Buddy’s dad, James Caan grimaces his way through this film like he lost a bet to the same people who made him do ERASER.

Jon Favreau – the man behind the quirkaholic SWINGERS and MADE, and the down-to-earth talk show DINNER FOR FIVE; who pulled those great realistic scenes on THE SOPRANOS as himself; who has touched Famke Janssen’s X-spots. Jon Favreau – wha? – I loved you, man!…

Another of those Santa-Is-Real films, with the paradox of insufferably obtuse parents not believing in him even though toys must mysteriously appear under the tree every year if he is as real as they pretend to believe he is.

Gags that “pop” in a 30-second trailer fall absolutely flat in the context of the film; we can’t tell whether James Caan is “acting” peeved or whether he really is for being here; and of course, The Message of “everyone needs to believe in a Fantasy to quell their inherent loathsome selfishness” is delivered with the subtlety of Rosie O’Donnell cannonballing nude into a public swimming pool.

Sonny Corleone must whack Santa, and Buddy must whack Joey Zaza as revenge for wiping out the New York dons and everyone lives happily ever after.

That’s not how it ends. That’s just my Christmas wish.