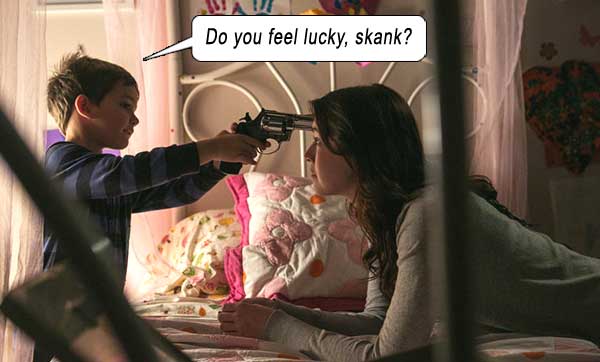 The babysitter showing the kids a VHS sex tape of their parents is not the true crime here – it’s that the parents are still using VHS tapes in 2016!

Babysitter thrillers are kinda like romantic comedies, in that there is only one objective; with romcoms, it’s pairing the two leads; with babysitter thrillers, it’s killing the kids. So it’s a welcome diversion when EMELIE takes a more disturbing tack, and forces the kids through psychological trauma that would be devastating in real life, rather than just cinematic escaping-death bombast.

Sarah Bolger is the babysitter, who gives her name as Anna, to parents who are desperately seeking a substitute babysitter at the last minute. Susan Pourfar and Chris Beetem are Generic Mom and Generic Dad. (Before you lambast the Generic Parents for just scooping a stranger off the street, keep in mind the movie opens with an abduction – the real Anna. So this young woman is posing as a trusted sitter.) As soon as they leave for their anniversary dinner, we sense something awry with Anna. (Subliminal point: she’s got a parting that implies she’s left-handed = evil.) But she’s a young Karen Allen lookalike, that makes all men give her a pass on anything, up to and including murder.

Don’t tell mom the babysitter bled while tricking the eldest boy Jacob (Joshua Rush) into watching her sitting on the toilet, and opening a tampon for her. Up to this point, the kids have been just noisy kids, playing, fighting, overlapping naturalistic dialogue; even the audio of them playing in another room was achieved remarkably realistically. Now young Rush gets to shine, as he gazes close-mouthed at Anna in wide-eyed wonder, trying not to be fazed, to prove he is adult enough to take the sight of her openly displaying for him. (FYI: in this universe, they call it “Pamtax” – hah!)

Don’t tell mom the babysitter fed the pet hamster to the pet snake! If we thought Rush was good, the other two kids prove just as natural – Carly Adams as Sally, whose hamster tragically becomes dinner, as she is forced to watch by Anna, and Thomas Bair as Christopher, the youngest, whose equanimity in watching the snake devour its prey would draw Anna’s attention, for her ultimate agenda.

Don’t tell mom the babysitter bred a baby of her own (which she called a “cubby”), that she accidentally smothered; now searching for a new cubby…

Don’t tell mom the babysitter said, “Give the gun to mommy,” referring to herself, when Christopher was playing with his father’s gun, pointing it at her head. She sees it as a victory when he complies, not with her order, but in not questioning herself as “mommy.” It becomes clear that her insane exploits are to “audition” the kids for her psychosis.

Don’t tell mom the babysitter’s cred is being questioned by Jacob; after overhearing that cubby story, he would rifle through her stuff and find her name to be Emelie…

Don’t tell mom the babysitter medicated the kids by drugging their nightcaps. Jacob tosses his, and becomes his brother’s savior, as his Generic Parents rush home.

Don’t tell mom the babysitter fled the scene of the attempted crime. For a sequel?

Babysitter thrillers. Like romcoms – the leads are always psycho.