Driving around Los Angeles in late 2005, I was as victimized as the next motorist in seeing the rash of billboards advertising the ABC sitcom EMILY’S REASONS WHY NOT. Though I waited passively to catch an accidental glimpse of this pap-outa-the-gate commercial malformity whilst channel-surfing (in order to warn viewers off it, as I knew would be my duty), I was not to get the chance, as I heard one night on the Tim Conway/Brian Whitman radio show that it had been cancelled within a week of its pilot episode airing.

So there is a god. 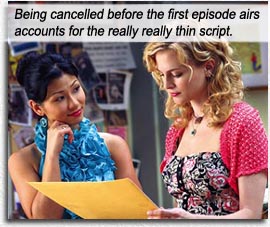 This program’s extinction, of course, made it nigh impossible to pen a review of a show which I’d never seen and – thankfully – would never see. But let’s face it – if you’ve seen one unfunny American sitcom in the last decade (sorry – that’s tautologous, as there are no “funny” American sitcoms to act as “controls”), you’ve seen this one.

Aww! The woman so beautiful that she doesn’t have to learn a trade to get by in the world having troubly-wubbly wiv her boyfriendy? She’s coquettishly neurotic? Aggravatingly coy? Perfectly coiffured with a “10” body, yet thinks she is hideous? She’s got her little system of criteria that informs her on when to date, whom to date, and how far to go on a date?

Thus, to discourage any further treatment or resurrection of this conceptual dungswill, I pen this Open Letter To Emily: