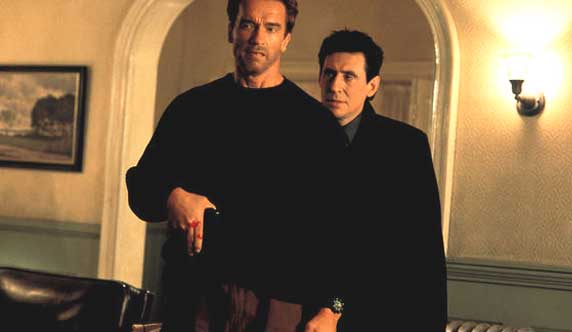 Illogically written by Andrew W. Marlowe and ham-handedly directed by Peter Hyams, END OF DAYS gets The Terminator out of his open-backed hospital gown (Arnold Schwarzenegger‘s return to the big screen after his heart operation), whilst blowing things up in Mysterious Ways and blaspheming Biblical verse to give Catholics something more to whine about.

When I woke up this mornin’
Coulda sworn it was Judgment Day!

For every anti-hero, there is his anti-Christ. Gabriel Byrne is the devil here – and he’s out to party like it’s 1999, on a mission to impregnate Christine with the Anti-Christ between 11 pm and 12 midnight, December 31, 1999 – ironically, in the hour that all porn will be lost – thereby bringing about the End of Days. Being able to read minds, conjure hallucinations and employ limitless magick, it doesn’t occur to Satan to expedite the impregnation process by appearing months in advance and courting Christine as a Teen Model and then closing the panty raid easily at the appointed time; instead, he appears on December 28th like a Keyser Soze Terminator and wonders why she doesn’t welcome him with open thighs… (See above comment re: stupidity.)

Here is a movie where nothing makes sense the moment it is uttered, let alone after contemplating its veracity or mythology. A priest (Rod Steiger) tells Jericho that ‘666’ is really ‘999’ upside down with a ‘1’ in front of it. So wait – Prince is the Anti-Christ?

Satan Soze pursues Jericho and Christine (J and C – get it?) around town, at no point doing anything which would actually precipitate their capture. In one scene, Satan recreates Jericho’s wife and child to tempt him into revealing where he hid Christine. But if he can see so deeply into Jericho’s mind in recreating his family with enough nuance to inspire nostalgia, why can’t he see where Jericho hid Christine not ten minutes ago?

Satan can make an assassin talk without a tongue, yet he can’t make that assassin unjam a semi-automatic weapon. And when Jericho shoots Satan at point blank range, Satan is courteous enough to open his shirt to reveal the wounds closing, so Jericho won’t worry unduly about Satan’s health – not sanitary to go about with open bullet wounds… Matter of fact, instead of simply possessing Jericho himself to get close to Christine and rape her, Satan expends so much unnecessary energy on side-projects (crucifying the tongue-less guy, blowing up Jericho’s partner (Kevin Pollak) and then saving him, and then blowing him up again, ridiculously battling Jericho when he could snuff him out with the effort of thought) that we wonder whether a more efficient assassin/lover shouldn’t be put on the case – say, Antonio Banderas.

In the end, the devil is dispatched not by the holy men whom Catholics pray to for deliverance from apocalypses such as these, but from the atheist Jericho. While the timid men of an impotent god exhort “faith” and quiver in their cells doing nothing about Satan actually walking amongst them, the Prince of Darkness is thwarted by a nullifidian with a big gun and a foreign accent. Which clearly says something that Catholics blindly refuse to hear: that even if the Devil were to exist, those who have been indoctrinated to unconditionally and irrationally fear him would be unable to conjure a belief in his downfall, let alone act towards it. Further, they might not truly want him defeated, for only through his contrary polarity does their god’s existence become tenable.

For it is written in the Book of Revelations: “And the Prince of Darkness shall descendeth upon the Earth without any solid game plan, and impregnate a virgin on a date which won’t have any significance until the Gregorian Calendar of the 1500s adopts the day-numbering which will put it in synch with the equinoxes, also adopting the Anno Domine syntax supposedly in congruence with Christ’s birth, the date of which has been forgotten, Christians appropriating the pagan Saturnalia festival in its stead. And the Prince shall effect a Revolution through tight purple pants and ambiguously-lesbian band members…”

I can believe the people being drained of blood and crucified, and the alcoholic built like a Mr. Universe; I can believe that a giant, supernatural monster can’t kill a guy armed only with a foreign accent; I can even believe that the devil needs to perform some hokey thirteenth century Celtic Druid ritual as foreplay – but what I cannot believe is the 20-year-old virgin in New York City in 1999.