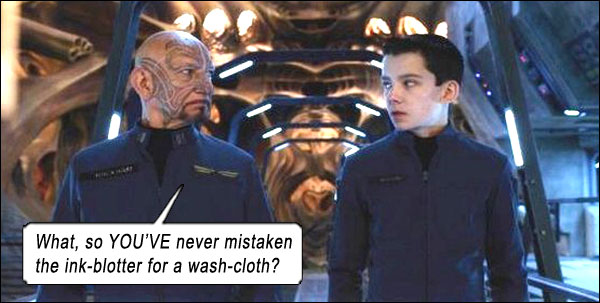 A boy-genius strategist is recruited by Earth’s military to repel extra-terrestrial alien invaders. And does the job TOO well.

Adapted from Orson Scott Card’s 1985 novel of the same name, ENDER’S GAME is set in a dystopian future where children adept at video games – the currency of future war – are taken from their parents and trained in digital war games, to repel an advancing extra-terrestrial attack. Ender Wiggin (young, cherubic Asa Butterfield) proves so adept at the games, displaying such ferocity and amorality, that the military put him in ultimate command – they adopt HIS “game” – to win the intergalactic war.

Though a war mentality permeates the film, ENDER’S GAME is too nuanced for movie audiences raised on simplistic goodie-versus-baddie storylines, with every commander, every battle tactic and even Ender himself, delving into moral ambiguities and questionable philosophies, much of it resembling Sun Tzu’s infamous The Art Of War: “I’ve always understood the way my enemy thinks – and when I truly understand them, I also love them.” That’s a commendable aspect transferred well from the book. Transferred not so well is the depiction of the antagonists – clichéd bullies within Ender’s military ranks to give him something to struggle against in a B-Movie frenzy.

Colonel Graff (Harrison Ford) gives Ender no quarter through cadet school, making it intentionally hard for him – to make Ender even harder. Graff almost drools in lust when Ender attacks bullies with the ruthless efficiency of a sociopath. Ender would kick a bully when he was down, stating clinically to Graff, “Knocking him down won the first war. Now I need to win every other war after that.” And Graf spurts in his pants a little. It’s what they need for the final boss battle – someone unafraid to contravene supposedly “civilized” strictures. Although, when Ender tousles with his big-nosed small-man-syndrome commander Bonzo (Moises Arias), Ender gives Bonzo the choice to withdraw or sustain a broken arm – Bonzo refuses – Ender breaks his arm. This CHOICE is something that Graff either doesn’t comprehend, or refuses to acknowledge, and an aspect of Ender’s personality that will cause him to rebel against the absolutism of Graff’s philosophy.

Already you can sense the thematic departure from most tentpole films – there are many layers to ponder – and thus ENDER’S GAME would be a box office flop (listed in Variety’s “Biggest Box Office Bombs of 2013”). Sadly, this ambitious film would not get a sequel, even though the ending sets it up for a brave new chapter, as Ender confronts the conquered Alien monarch and sets off with one of its eggs for parts unknown. To remain unknown now.

Hailee Steinfeld (TRUE GRIT, 2010) is Petra, Ender’s puppy love interest from a competing team. Abigail Breslin (AUGUST: OSAGE COUNTY) is Ender’s sister, with whom he keeps up some kind of futuristic email correspondence, for the purposes of primitive voiceover exposition. And suddenly—

What the–? In hard closeup, Gandhi as bovver boy. When Ender wakes one day, he is confronted with the stoic Kingsley like an hallucination. Kingsley is mythical Mazer Rackham, a fighter pilot who repelled the alien invasion the first time. I don’t remember how Mazer appeared in the book, or what he looked like, but here, we fall out of the movie like a skateboard accident – because it’s Ben Kingsley. If director/co-writer Gavin Hood (X-MEN ORIGINS: WOLVERINE) had cast an unknown, maybe this stunt might have worked – but it’s Ben Kingsley. Is Ender hallucinating or am *I*? 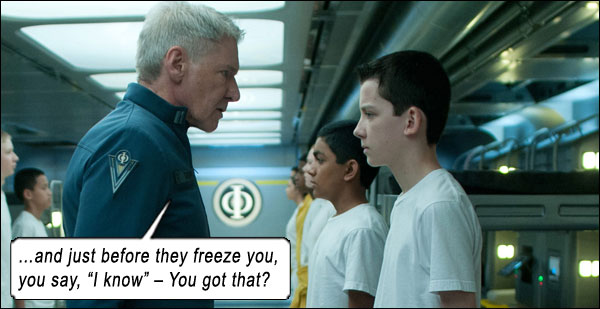 Another incongruous aspect is the training room. In a spherical zero-g arena, cadets in teams engage in mock battle with each other, with rules that suspiciously resemble the idiotic game Quidditch from HARRY POTTER (although J.K. Rowling’s stories were first published in 1997 – did she steal the stupid game rules from Ender?), where cadets score points by shooting their enemies, but one cadet breaching the other team’s goal line means an absolute win, points be damned. No matter the intriguing tactics, hero angles and ingenious visualization of the sphere, it’s a pointless exercise, as we shall discover when they end up Tom Cruising it in a MINORITY REPORT-style hologram room, commanding fleets of warship virtually.

Meanwhile, the alien queen is telepathically trying to contact Ender. Why? Ah, that’s for the sequ—oh shit…

Graff and Mazer are painted as ambiguously evil (but then, Harrison Ford has ALWAYS played ambiguously evil, if you really face the truth; remember, even his most beloved character, Han Solo, was a smuggler, a criminal), and are played against Major Anderson (Viola Davis in an empathetic role), as they promote the coming war as the war to prevent all future wars: contain the aliens attacking Earth, then take the battle to the aliens’ Homeworld. Like William Wallace taking the battle to England; like Napoleon pursuing Wellington to Watergate; like Ender kicking a bully when he’s down…

Which raises issues like: Do you become the bully yourself? Is it more honorable to leave a loser when he’s down, or continue to kick the shit out of him to save your whole civilization the indignity of being conquered? Thus, is it a mark of cowardice to leave him when he’s down, or a mark of cowardice to continue kicking? In the film’s fantastic coda, it explores all these themes of war, and Ender – like Bowie – ends up Loving The Alien.

The ending is surprising for its boldness. And it makes Graff rock hard. He maintains: “We won! That’s all that matters!” Ender counters, “The WAY we win matters!” And the movie makes such a compelling argument for both sides that I don’t know which is truth any more. And ain’t that the two-sided truth about ALL war?