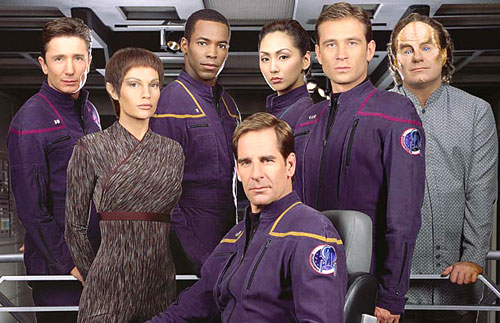 With a title theme song that sounds like Trey Parker ululating a poignant 80’s hair-band power-ballad, ENTERPRISE launches Blacula and his vampire cohorts onto the lids of lunchboxes and into comic book and action figure mayhem across the known geek universe. Their mission: To boldly go where no B-actors have gone before. 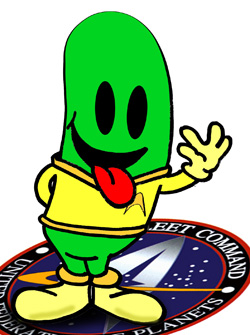 With his turtleneck rolled suavely up to the third vertebra, Scott Bakula, who has been called “the thinking man’s Captain Kirk” (Dave Becker, USA Today), “the twenty-first century’s answer to Jean-Luc Picard” (Milton Sandler, Sci-Fi Log) and “a piece of cheese” (Jim Davis, SunGard Trading), plays Jonathan Archer, captain of the first USS Enterprise mission ever, quantum-leaping his big-nosed way through his pioneering environs, valiantly doing his best haunting B-actor thrown into a role that will propel him into the annals of obscurity faster than the mythical Warp drive on his eponymous twin-pronged chariot of adventure.

I know that some of you experiencing the very real technological magick of this futuristic website are quite certain that Warp-4 travel is physically possible and that the atmosphere constituents on any number of extra-solar planets will contain nitrogen and oxygen in humanly-breathable quantities. You also may believe that sound waves can be propagated in a vacuum; that convergent evolution has made it possible for aliens from the farthest reaches of the galaxy to evolve exactly like humans except for maybe one differently-colored eyebrow or extraneous nose-ridge, and that a “phaser” can be set to “stun.” That’s okay – media inculcation knows no bounds – but for right now: please remove your purple cape, put the Klingon wraparound headmask down and step away from the 1/1 scale Bird Of Prey with the operational photon torpedoes.

We have some talking to do…

Jolene Blalock plays the emotionless female Vulcan with big pointy ears AND big pointy silicone chest implants; showing more emotion than most of the human crew, except for the first mate, whose bellicosity was only offset by the squareness of his all-American jaw, and who maintained that humans had done away with war in this enlightened year of our lord 150 years B.K. (Before Kirk) – oh, yes, I’m inclined to believe this assertion coming from the guy who hands-down starts the most arguments. If there was anyone more in need of a Vulcan nerve-pinch massage… 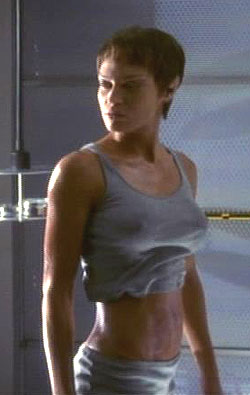 While Blalock, whom many will remember for her magnificent scene in which her t-shirt is stretched taut over above-mentioned pectoral implants, tried valiantly to do “Leonard Nimoy with a great rack,” the token black guy and token British guy bond in an improbable zero-gee sweet spot, which cannot occur in a spacecraft which is not spinning – but I promised myself I wouldn’t mention the physics.

Stephen G-Dog Hawking be spinnin’ in his wheelchair like a pulsar.

Having learned nothing from Mr. Lucas’ Big Mistake in STAR WARS – EPISODE I: THREE TITLES FOR ONE WRETCHED MOVIE, the creators of ENTERPRISE have endowed this filmic piece with technology that supercedes what is supposed to be future technology in the original series. (Now, was that a double-negative or an en passant?) This first Enterprise craft, replete with better background efx, shadow placement, fuselage detail, and honey-ham-glow warp drive reactor cores, makes Kirk’s later-model NCC 1701 look like your first Big Wheel – after your first accident in it.

It’s a good thing that in the 23rd century (which occurred somewhere around 1966) all these effects were lost to human beings, or we would never have been privileged to witness the unbridled scenery chewing of one T.J. Hooker aka William Shatner, who would have only been hampered by too much cinematic flavor had the Effects Department not gone awol.

There was no acting before Bill Shatner.

Now, I’m not one of those procrustean fans who has a working model of the USS Enterprise in his spare bedroom, complete with blueprints of floor plans and flushing toilets; my wardrobe is thankfully devoid of Star Fleet uniforms from any Trek mission or movie; I don’t possess a polystyrene Klingon facemask replete with voicebox modulator which translates English into Klingon syntax – No. I am the Trekkie Casuale, who simply gives love to Captain James T. Kirk and his original band of rag-tag adventurers for the simple fact of their precedence. They WERE the first to go where no man had gone before – into a universe so camp you went in wearing an Adam West Batman cape and came out wearing your pants tucked into your boots, a two-sizes-too-small t-shirt with a Star Fleet insignia pasted to your left nipple and a flagrant lemon coloration that just screamed “boy toy” on the dance floor. 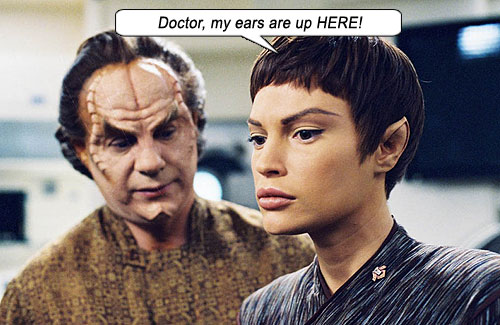 Halfway through this two-hour premiere, Count Blakula meets up with another chick with fantastically tight clothes and a great rack. Thus do we snatch a glimpse of the marketing department’s deep psychological ploys to hold an audience’s attention: tits.

Bakula, whose memorable roles have run the gamut of characterization and impassioned humanity – who can forget his turns as that guy in MAJOR LEAGUE: BACK TO THE MINORS, or as that other guy in MEN, MOVIES & CAROL; and how can one overlook NOWHERE TO HIDE, in which he played that guy? – brings the hammer down on his blue-skinned Suliban enemies quite distractedly, and is out-acted by his phaser pistol in the last scene.

Ironically, the Enterprise crew were never meant to use the matter transporters for humans, only bondage equipment, purple capes and sweetmeats. But in a desperate bid to escape the blue-skinned guy, it becomes imperative that Bakula be the first human to be unauthorizedly beamed through the matter transmitter. To wit: before there was “Beam me up, Scotty,” Scotty was beamed up! Dance belt an’ all.

During the second hour of ENTERPRISE, I found something better to do…

The decision to make the Vulcan science officer a woman was obviously to recreate the sexual tension that was always so tangible between Spock and Kirk. The end of episode 1 already sees the chemistry between Blalock and Bakula flowering, as this emotionless Vulcan almost cracks a smile in the direction of Bakula’s tenting trousers.

STAR TREK has never been about how believable the storyline is; was not originally a vehicle to showcase the expertise of efx-junkies; was never concerned with the second-grade physics laws that were incessantly broken each episode – it was always about the CHARACTERS. The Trek family (much like the KISS Army or superhero fanatics, or baseball card collectors) will never let their heroes die, and with every next generation (of fans AND series), the newborn take the place of the old to carry the flag like that staged photo of Iwo Jima that has circulated for five decades. 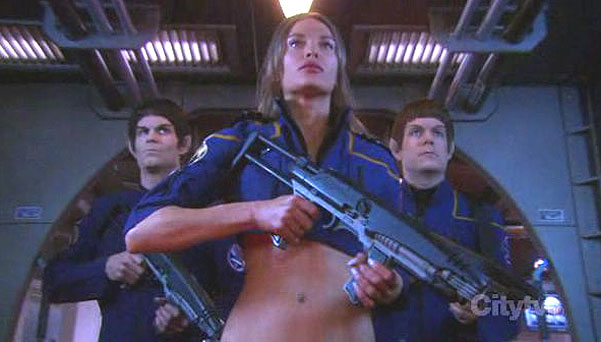 Because panties just get in the way of battle armor.

STAR TREK is also about the franchising. Consider: almost every “sci-fi” series of the last few years has been blanketed under the Star Trek banner (DEEP SPACE 9, BABYLON 5, VOYAGER, et al) though none of them have the slightest resemblance to Gene Roddenberry’s initial concept, except THE NEXT GENERATION; bloated marketeers realizing that the core geek fan base with the uniforms and Klingon headpieces will ensure a satisfying baseline Nielsen rating to kickstart the visionless series into at least two more seasons. And other supposed “sci-fi” series all take on the same gloss-camp look of the TREK universe (FARSCAPE, STARGATE SG-1 et al), relying on the premise that geekdom knows no prejudices (well, that’s the Marketing Way – but is it the Janeway? [sorry – shout, but don’t hit]).

It’s all about the lunchboxes. And spiffy uniforms…

Didn’t the Sermon On The Mount specifically state the geek shall inherit the earth?… What?… oh, blessed are the cheesemakers – well, that still pretty much covers Kirk and descendants.

We are all well aware that anything aired on UPN 13 will exude a stench that reeks of lowest common demographic, inoffensive and banal, completely lacking grip and substance. Count ENTERPRISE in. On the other hand, this show is the latest (and not the last) fun fan vehicle for the Treksters (where else in this world can a line like, “You have no idea how much I’m restraining myself from kickin your ass!” be said with a straight face?), which will no doubt spur heady, yet wholly inane debate as to Scott Bakula’s suitability and demerits, the spacecraft’s particulars, the crew’s butts in those tight black leathur jumpsuits, the origins of many well-known phrases, procedures and dance moves, and of course, Jolene Blalock’s magnificent rack.

To the rest of the clear-thinking world who have attained the Age Of Reasoning or the age of 9 (whichever came first), this ENTERPRISE endeavor is abjectly spurious, but for what it is – *THE* STAR TREK for a generation weaned on BABYLON JIVE and THE OUTER LIMITS REHASHED – to our utter chagrin, it surely will live long and prosper.