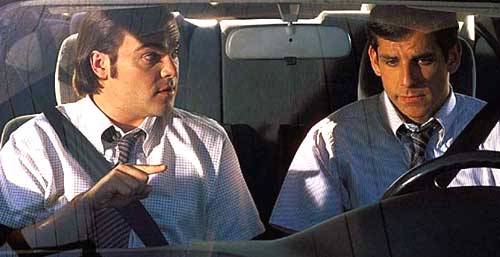 “Stiller, I think your dweebyness is starting to rub off on me!”

In Barry Levinson‘s ENVY, corporate peon and shiftless dreamer, Vanderpark (an uncharacteristically reined-in Jack Black) invents a spray which vaporizes doggy-doo, appropriately named “Va-poo-rize.” His pragmatic neighbor, Tim Dingman (Ben Stiller, in characteristic nebbish idiom), who is also Vanderpark’s co-worker and best friend, is the character to whom the movie’s title pertains. Though he was initially invited to invest in Vanderpark’s invention, Dingman poo-poohed the concept, and watching Vanderpark’s riches grow to maddening proportions drives him to deeds of dastardly dander…

99 minutes of comedic diarrhea later, Vanderpark’s very invention leaves him neck-deep in political poo, finding the two friends on the same stool again. And us on the pot.

It might have been a commentary on class warfare, on separation anxiety, on jealousy or even, uh, envy, but with Levinson’s loose direction (from a story by Steve Adams) and constipated performances, ENVY fails to make a splash. Like Vanderpark’s empire, this movie was unfortunately also built on poo.