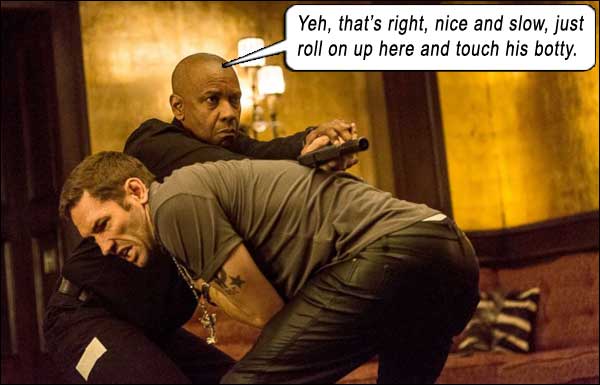 A retired black ops hitman, trying to blend into quiet suburban life by being a clerk at a hardware store, must use his “particular set of skills” to help a prostitute with a heart of gold.

THE EQUALIZER (based loosely on the 1985 TV series of the same name, starring Edward Woodward) might have retained more cred had it not seemed like some coked-up writer’s pitch to a just-as-coked studio exec at Denny’s at 4 a.m. When he saw the executive’s interest was flagging, the writer consulted his Lethal Weapon/Die Hard/Taken Handbook and threw in another cliché and some more coke.

Chloe Grace Moretz is young hooker Teri, whom McCall crosses paths with every night at the same diner. He sits and reads a book while she sits open-legged and face-painted like an obvious hooker at the bar. But writer Richard Wenk (16 BLOCKS, THE EXPENDABLES 2) makes her a reluctant whore, even though her whole demeanor screams “Take me roughly from behind for cash!” She wears ripped short-shorts, lipstick the color of a baboon’s ass in estrus, a bra that pushes her tits into her face to attract customers, yet she flinches when construction workers make kissy noises at her. And she’s beholden to the Russian Mob. And when her boss orders her on a job, she tries to decline because the client is “a pig.” Next day at the diner, Teri has a bruise on her face – because the guy couldn’t be just a pig – he had to be obese and a beater of women as well. Don’t mind me while I’m loading the deck, says Wenk. So this profession that you’ve been conditioned to decry is painted as sympathetic. She’s a regular Saint Hooker of Assisi.

Antoine Fuqua brings the mightiest production values to THE EQUALIZER; last directing Denzel in the boisterous TRAINING DAY, Fuqua takes Denzel on an opposite journey into the heart of introspection and dad-slacks vigilantism. Referencing Hemingway’s The Old Man and The Sea, McCall laments that he cannot relinquish that part of himself no matter how hard he tries. Nice theme, but how far up the chain of command do you draw the line when seeking retribution? McCall’s actions reach a point of diminishing returns when he travels to Moscow to kill the boss of the Russian crime syndicate. Moscow?! All because a hooker got beaten up. Denzel – I got beaten up and my car was stolen. Can you vigilante my case to the highest chop-shops in the land? Oh, I don’t have a blond poonanny…

Denzel has become so good in these avenger roles that we do not question the paucity of thought that went into the movie’s plot, which is hell-bent on being ten other action movies. Like Teri, McCall can’t just be a retired killer – no, the point of this whole “Equalizer” thing is that he stands for the little guy, he evens the odds, he – equalizes the stakes. So though he is reclusive, he finds time to help a co-worker try to lose weight for a security guard exam; he enacts justice on a robber who holds up his store; is he trying to atone for the sins of his past life by being Mr. Rogers and Liam Neeson and the Powerpuff Girls all at once? 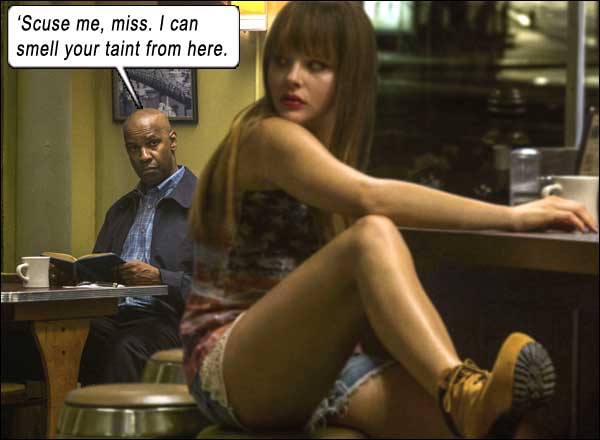 When McCall “borrows” a sledgehammer from the store to use on the robber, does he not consider that maybe the robber is also a “little guy” in a desperate situation that needs his odds equalized? Maybe if someone stood up for that guy, he wouldn’t have turned to small-time crime. Like Superman, McCall thinks beating petty thugs curbs the root of crime, but it just combats the end result of upper echelon crimes against humanity. When a congressperson creates tax breaks for corps, or vetoes funding for education or hospitals, how many more people are ruined or put to death indirectly? You want to “equalize” things, Mr. Socialism? Run for Congress.

The next day, we see McCall wiping the sledgehammer before he racks it – waitaminute! So he brought that sledgehammer back into the store all bloody. How many people in the parking lot did he pass with this bloodied hammer in his hands?; how many security cameras?; how many floor managers and employees? And only now, as he gets to the rack, is he wiping it down? Some kinda special ops guy he was!

When he learns Teri is in hospital after being bashed by her pimp, McCall visits the Russian sanctum sanctorum for a palaver. Into a room full of mobsters he saunters and makes a dollar offer for Teri’s freedom. Upon being refused, he turns and walks to the door. They laugh. He… locks the door. It’s one of those super-man scenes. We know who the last man standing will be. McCall’s eyes scan the room (in a manner not unlike the Downey SHERLOCK HOLMES movies – without the faux-British narration), where all the instruments and methods of his attack are foreshadowed; he estimates out loud it will take him 15 seconds, sets his watch. Then he goes to work. Wading into the Russians fluidly, not cruel, not angry, but efficient, deliberate, dead-eyed, indifferent, using the tools in the room and the thugs’ own bodies against them, and, of course – the aikido weapon of choice – many, many Spock Chops. He checks his watch: 28 seconds. A humorous moment where he registers disappointment with himself, yet pep-talks himself that he can do better next time. It is the best scene in the movie. And it doesn’t belong in this movie.

Bill Pullman and Melissa Leo cameo. I can’t remember why, but they get to do all their lines in pajamas, so they’re even more comfortable than Denzel in his casual slacks.

The platonic TAXI DRIVER relationship between McCall and the prostitute is annoying enough (“She brings her own light” – aww, hell no! Denzel did NOT just say that!), but then the onerous side-story of his mentor relationship with clerk Ralphie (Johnny Skourtis – the Mexican Jack Black) is walkout-worthy. Movie, we don’t care whether Ralphie becomes a security guard, we don’t care when he quits his hardware job, we don’t care he’s back working at his parents’ store… look, Movie, we just – don’t – care.

The finale finds the Russians holding all McCall’s store friends hostage in their own massive hardware store (10% discount on all rakes!). The hostages include Ralphie, whom you’ll be happy to know passed his security guard exam and is now a security guard at his own store, obviously making a hash of it, as he lets all the employees get kidnapped on his first day! The Russians want McCall himself in exchange for the hostages.

This is a job for – Home Depot Man! With skills learned on the mean streets of Aisle 12 (hand tools, electrical and lighting), with his apron strings untied and his cloak—cough—apron flapping in the wind, and with his trusty sidekick, Fat Security Guardian, he keeps the world safe from Russian gangsters who trade in flesh, and people who try to return tools the next day after buying them to use just once, instead of renting them.

They tell McCall to be there in 30 minutes… And McCall takes public transport! Truly casual in his dad-slacks. A bus should get him there sometime after all their toes have been cut off and mailed to their families.

When McCall is late – duh, the bus! – the inefficient Russian thugs are told by their boss (Marton Csokas) to “Kill one” of the hostages. Suddenly, they are distracted by music being turned on through the PA system. They’re Russian thugs and the thing that distracts them from just shooting a nondescript hardware store employee is music on the PA system. Hence their “inefficient” tag.

Marvel as Home Depot Man utilizes the tools of his store (the “tools of his trade,” so to speak), everyday items used to their maximum killing potential, to take out the bad guys one by one, until he faces their leader – with a Hollywood Nail Gun. Now, normal nail guns require the pressure of a nail against a surface to operate in driving in the nail, and wouldn’t hurt a fly if used to shoot nails through the air, but the Hollywood Nail Gun (as proven when first used in LETHAL WEAPON) can shoot nails through the air with the force of Mel Gibson attacking your religion. So we hope that McCall has picked up the right model when he points it at the Russian leader. Thankfully, he has, as the nails are shot over twenty feet with the force of movie studio hubris and contempt behind them.