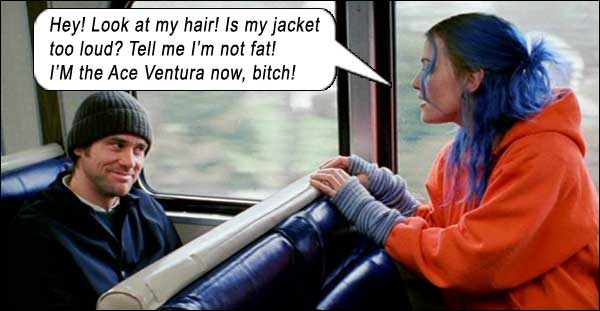 Darkness piled upon darkness, steeped in disturbing dissonance; a glutting, suffocating despair; a stultifying of the spirit and a crippling of the ego. No way out, no way out… no, not the movie – my last relationship.

ETERNAL SUNSHINE OF THE SPOTLESS MIND opens with a disoriented Joel Barish (Jim Carrey) wondering how he sustained a giant gash along the side of his car. From there, through flashbacks and flash-forwards, we gradually unveil the depressing reality that is his life – and how his last relationship was a promise of respite from despair, but ended up merely presaging a different species of despair. 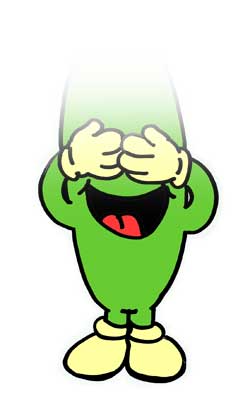 Eternal Sunshine of the Poffyless Mind

After his relationship has acrimoniously soured with his girlfriend, Clementine (Kate Winslet, even more irritating than she was in TITANIC – if that’s possible), Joel discovers, through mutual friends, that she has had a scientific procedure performed that erases selective memories; while some may contend that Kate Winslet has always been walking around with a blank brain, in this case, she has just erased memories of her relationship with Joel. In a fit of righteous wrath, Joel enlists Dr. Mierzwiak (Tom Wilkinson – whose description of this implausible procedure sounds oddly feasible) to do the same for him: erase Clementine from his mind.

With Mierzwiak’s aides, Stan (Mark Ruffalo, sporting the Einstein “bed-head” ‘do) and the slimy Patrick (Elijah Wood, with a panty-stealing penchant and a lunatic giggle, seemingly intent on wiping the audience’s memories of his cutesy hobbit mien), Joel undergoes the erasure procedure, but as his memories regress (with his body unconscious, but his dream self somehow aware and participating in the regression), his Clementine memories become less antagonistic, veering towards enjoyable and then, he realizes too late, downright “precious.” His dream self fights against the erasure, trying to hold onto the pleasant memories, realizing that if every trace of Clementine were wiped, somehow a piece of himself would disappear also.

Director Michael Gondry has captured on film one of the most ineffable human experiences – the dream state: the feeling that everything you are experiencing is somehow sensible, yet not making sense; that you are running mightily yet making no headway; that feeling of underlying cohesion and overarching dread. Using nothing but hand-held cameras and stark lighting in some sequences (in others, utilizing disappearing sets and suddenly-changing landscapes), Gondry evokes that desperate, visceral fear that irrationally gluts our dreams. Add screenwriter Charlie Kaufman and the disturbing irrationality only escalates.

The film’s title is excerpted from a poem by Alexander Pope, “Eloisa to Abelard,” the same poem that puppeteer John Cusack enacts in another of Charlie Kaufman’s screenplays, the beatifically bizarre, BEING JOHN MALKOVICH.

One cannot overstate Carrey’s brilliance in this role. Watching his unshaven, haggard, insecure paragon of introversion, Joel, it is impossible to imagine an Ace Ventura careening across the screen monopolizing every oxygen atom within reach.

Carrey’s tastefully subdued performance is contrasted with that of Winslet’s gregarious Clementine, a talkative, intrusive young woman who at first impression seems to have dropped too much acid in the nineties. When Clementine insidiously, yet forcefully seduces Joel on a train, we realize we have seen this character in cinema before: the pushy young wench who unlocks the heart of gold beneath the shy guy. But why do screenwriters believe that a talkative and obtrusive woman is somehow “attractive” or “spunky”? There’s another term for insecure, attention-seeking, irritatingly extroverted women who suck all the energy out of a room with their rattling bicuspids – high maintenance. 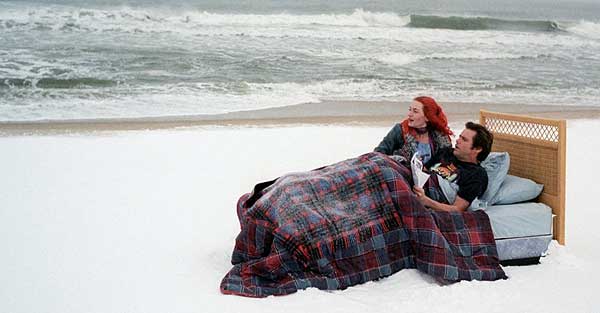 Having sex in public while people watch: cool.
Spending the whole NIGHT in public: well, people just get bored and wander away.

Joel wants to retain the happy memories – but he’s got it all backwards. It is these memories that wrench you with unquenchable longing, making you apt to do something stupid – like getting back with her. It is the bad memories – those weak-chested churnings of impotence and disrespect – that will keep you sensible enough to never call the crazy bitch again. But who wants to shoulder that unsavory burden? Just erase the lot, and you’ll never have to forget regret.

Before their brain-wipe, each person is required to make a cassette recording of all the aspects about their wipee they cannot stand. Due to a subplot involving Mierzwiak’s infatuated, spurned secretary (Kirsten Dunst), both Joel and Clementine unethically receive their partner’s recordings to listen to, and we realize that the present-time storyline is Joel’s and Clementine’s second meeting, independent of – and unaware of – their previous relationship.

And what we thought was a unique exploration of despair, coupled with repression and regression ramifications; a film which alluded to god-complexes (the doctor’s command of Joel’s brainwaves) and self-persecution paradoxes (Joel is a self-persecuting personality, which is why he gravitates towards women like Clementine) topples from its lofty aspirations, to instead explore the girly-man question of whether you would re-commit to someone whom you have already found out you cannot stand.

For the sake of sating the expectations of young girls, Joel and Clementine poignantly re-vow their love for one another, despite the evidence of their damning testimonies on tape. Couples Being Paired is the grand device that engines 95-percent of cinema in America. From STAR WARS to GENTLEMAN’S AGREEMENT, from CROCODILE DUNDEE to ROCK STAR, no matter the ostensible theme or subject matter of the movie, it will always boil down to the point of view of the paired couple, against all adversity. In this film, the adversity is the couple itself.

Does this say something about the fact that true love will triumph even over mismatched personalities – or that people will do anything to get into each other’s pants?

So after scaring us with faceless dream-people and nightmare corridors and potential brain damage and – the most horrible ugliness of all – girlfriends who won’t stop talking, ETERNAL SUNSHINE ends up as just another quirky romance clothed in a Real Movie’s drama suit.