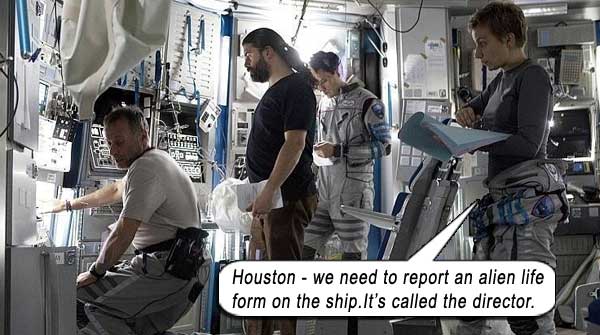 The first manned mission to Europa, Jupiter’s fourth-largest and most famous Galilean moon, seeking the suspected oceans of water beneath its icy crust, seeking organisms that may be emitting the heat signatures that NASA discovered, but mainly seeking to overcome that annoying “found footage” feeling.

Fucking found footage. These days, every indie movie with great ideas and no budget bellyflops into this “found footage” ethos, as if to exonerate itself from its obvious production deficiencies. EUROPA REPORT does not exactly claim to be “found footage,” rather, “declassified footage” (which will definitely become a sub-genre, seeing how well this movie does it, and knowing how plagiaristic Hollywood is).

Told in retrospect, after some kind of tragedy has befallen the team of six astronauts, EUROPA REPORT has everything going for it – authentic sets and spaceship instrumentation, resourceful direction, good acting, breathtaking planetary shots showing Europa’s network of vein-like channels and the rilles and plateaus in closeup, and a tense, harrowing story. But this “declassified footage” stupidity just eats at our suspension of disbelief. While we’re trying to enjoy this tale of wonderment and discovery and trepidation, we’ve got to ignore the fact someone took these “thousands of hours” of footage (that showed the psychological disintegration of the team and the harrowing physical dangers they endured) and unemotionally cut that into a 2-hour document for public release, replete with voiceovers, video reports, narration, dissolves, scenes out of chrono order for storytelling impact, scenes of the deaths of crew members (! – is this really fit for public viewing?!), and integrating various camera angles into cohesive scenes. Why do we get so many shots of the astronauts doing nothing to further the plot? Wouldn’t it behoove the makers of this document to only include each “plot point moment” that led to the ultimate fates of each astronaut? How nice that they thought to “personalize” each crewperson as well, with introspective moments that lead nowhere… 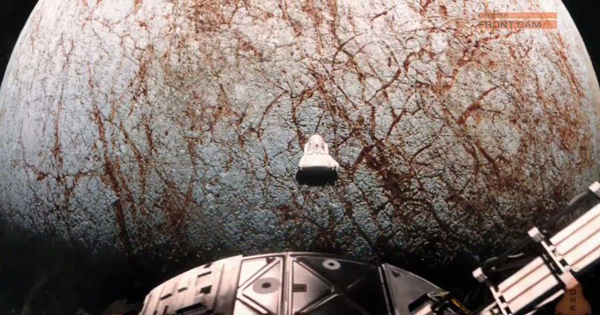 The absolute best views of Europa since God created it in 6006 B.C.

That’s the overarching annoyance of this intelligent film that is aimed at a reasonably educated audience: the paradox being that that same educated audience won’t be able to simply enjoy the film at face value like dullards, but will rather not be able to avoid thinking of the monumental logistics behind the editing of these supposed tragic tapes.

The astronauts are Daniel Wu (stoic captain), Sharlto Copley (family guy), Christian Camargo (serious scientist), Karolina Wyndra (Euro model hotness), Michael Nyqvist (older guy, so ambiguously suspicious), and Anamaria Marinca (another flat-bellied Euro female). Yes, the question of sex is always prominent in a mixed-gender space crew. But no one puts their mouth on something dirty. No one puts their balls in someone else’s hand.

Very authentic scientific discussions of Europa’s ice layer, its probable subterranean heat from volcanoes, etc. but then – fall out of the film again! Found footage films are ruined by even the barest recognition of actors. For me, it was recognizing ping pong ding dong legend Randy Daytona himself (Dan Fogler from BALLS OF FURY – yes, Lane Goddammed Marshall from LOVE HAPPENS). He does a great job as a “respected astronomer” – snigger – but this guy was born to be a comedic actor and wrapping my head around him on a press panel expositing scientific data about Europa was too much to bear. Embeth Davitz – another recognizable face – overacts as an emotional mission planner. Then – Sharlto Copley, Neill Blomkamp‘s golden-haired boy from DISTRICT 9 and ELYSIUM. And is that an American accent he’s attempting? As far as I was concerned, EUROPA REPORT was no longer a report from Europa, it was now “just a movie,” and was affiliated with NASA like Tom Hanks is affiliated with the Apollo Program. 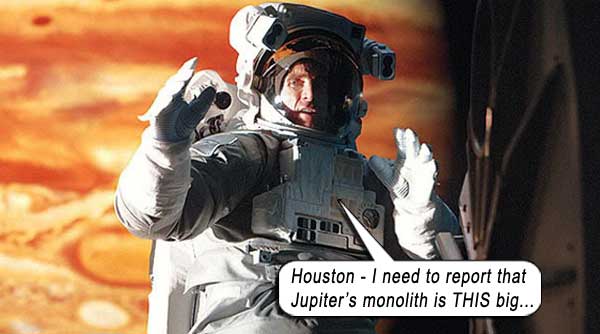 Written by newcomer Philip Gelatt and directed by Ecuadorian Sebastián Cordero, EUROPA takes its time to cast its eyes about in wonder (through probes and monitors) when the astronauts land and start their experiments on the ice moon. I really like the unhurried buildup of the tension, which may lead the short-attention-span contingent to criticize the movie as slow. Because there are no “aliens,” space battles or wanton helmet-removal. EUROPA is more sensible than that, and can sustain tension with real life adversities, of which there are so many in space (that are largely untapped in lesser films due to aliens, space battles and wanton helmet-removal). And any movie that shows Neil deGrasse Tyson in archive footage speculating on life on Europa is aces.

There are unforced errors though – we see solar flares and hear them “roaring.” Don’t do that, Sebastian. The Sun is 800 million miles away from Jupiter. No one’s gonna hear it, even through the most powerful telescope. And when the ship is docked on the moon’s surface, sometimes we see the crew in different gravitational positions in the same room. Don’t do that, Sebastian. There’s no floating around when you’re parked on a planet.

Just like the old professor in BEAST FROM 20,000 FATHOMS (1953), in 2013, we still retain the trope of the scientist so enamored with their discovery that they disregard their own safety. “I’m going for a closer look” – despite the fact that your oxygen is low, and you’ve lost visual contact, and the ice is unstable, and you’re the most sexually lubricious crewperson available for mating procedures…

Didn’t HAL 9000 warn us not to land here? “All these worlds are yours, except Europa. Attempt no landings there…”

Sebastian Cordero’s shot across the bow at the English-speaking market, EUROPA REPORT is a classy science fiction experience with imagination and guts. Hope he dispenses with pandering to Westernized fads like “found footage” and shows us what we’ve all found on this journey – his true moviemaking talent.