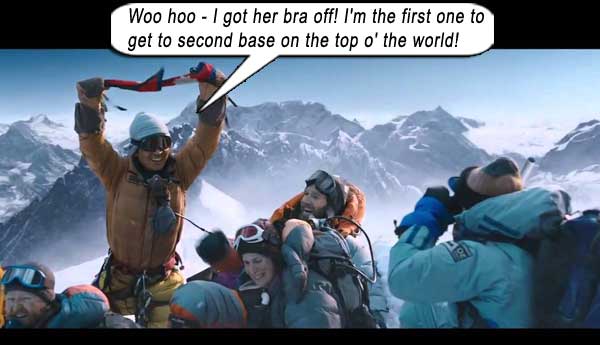 Tragedy at the top of the world.

Climbing Mount Everest was the biggest mistake I’ve ever made in my life. I wish I’d never gone. I suffered for years of PTSD, and still suffer from what happened. I’m glad I wrote a book about it. But, you know, if I could go back and relive my life, I would never have climbed Everest.
— Jon Krakauer, “HuffPost Live,” Aug 2015. 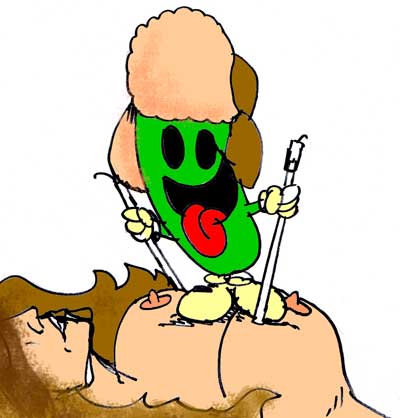 The only mountains worth climbing.

Mountain climbing. The most pointless pursuit in the history of human endeavors. “Because it’s there.” Really? You climbers have nothing better than George Mallory’s apocryphal “most famous three words in mountaineering”? When climbers die on mountains, or consume resources for impossible rescues, or get other people killed in the course of saving their lives, how are they any different from people on those solo yachting quests who have to call the Coast Guard to come save them when their stupid million-dollar canoe tips over? What is it achieving? Is it curing cancer? Why is it any more noble a pursuit than me in my dank basement putting one thing on top of another thing just for the hell of it?

Which brings us to – EVEREST. The mountain, the movie, the mayhem. And despite my annoyance with the pursuit of climbing-for-leisure, EVEREST the movie – is great! As is the main book this movie is based around – Into Thin Air, Jon Krakauer’s account of the 1996 tragedy on Everest, where a total of 15 climbers died during their summit attempt. For a pursuit so slow-moving and arduous, the movie is edge-of-seat, educational, inspiring, majestic, forbidding and compelling all at once. The very act of attempting something so all-consuming and life-changing – summiting Everest – overwhelms any practicality. When we’re ensconced in this ethos, it’s not about the why, it’s about the why not.

On May 10, 1996, climbers from many international expeditions would summit Everest. This movie follows the fates of climbers from two expeditions – Adventure Consultants and Mountain Madness – who would reach the summit after their prescribed “turnaround time” and encounter a devastating storm on their descent which would end many of their lives.

Jason Clarke is excellent as New Zealander Rob Hall, underplaying as the experienced tour guide, one of many guides who had summited Everest and had established Adventure Consultants to guide tourists to the top. Another such veteran was Scott Fischer (Jake Gyllenhaal), of Mountain Madness, whose style was akin to his company name; he didn’t “hand-hold” (as he liked to describe the detailed, supervisory nature of Hall), but rather let his clients roam freely up and down the mountain, believing that if they couldn’t summit themselves, they had no right to be there. 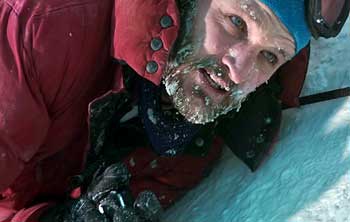 Keira Knightley is Hall’s pregnant wife Jan; tearful farewell at New Zealand airport, not realizing it would be the last time she would see her husband. Emily Watson is Hall’s base camp supervisor, Helen Wilton. Josh Brolin is Beck Weathers, a climber who came back to life after being left for dead; Robin Wright is Beck’s estranged wife, Peach, who would use their wealth to chopper Beck off the mountain. (At one point, Beck chides Hall that “for $65,000” he wants better safety than clambering across rickety ladders. Immediately we realize that mountain climbing – like yachting – is for elites who have nothing better to do with their money.) Character actor John Hawkes is weak climber Doug Hansen, who would cost Hall his life; Sam Worthington cameos as Guy Cotter, a fellow New Zealander tour guide, a cool empathetic friend who cannot do anything to save Hall except apply Concerned Face No. 27. Ingvar Sigurdsson plays the tough Russian Anatoli Boukreev, who felt that using supplemental oxygen was cheating; he would play a big part in trying to rescue climbers. And Michael Kelly is author Jon Krakauer, who made the summit, only to castigate himself upon descending to base camp, unaware that so many of his fellow climbers were in distress and therefore in need of his help – which he could not give anyway due to being barely alive himself.

With enough determination, any bloody idiot can get UP this hill. The trick is to get back down alive.
— Rob Hall, head guide, Adventure Consultants.

Mount Everest towers 29,029 feet above sea level (8,848 metres), straddling the border of Nepal and Tibet. Climbers land in Kathmandu, Nepal to start their trek. It is here Hall tells the expectant troupe: “Human beings simply aren’t built to function at the cruising altitude of a 747.” We hear about supplemental oxygen tanks, the strict “turnaround time,” after which the sun starts melting the ice, creating crevasses and unstable conditions. Hall makes it clear it is his job not only to get his clients UP the mountain, but DOWN again alive. As Krakauer states in his book, “Remember, the summit is the HALFWAY point!” We take it for granted that climbing casualties happen on the way up, but it’s on the way down that most deaths occur. Which was the case here.

Amidst amazing cinematography, authentic backdrops and maximum chill, Hall’s clients reach the summit on May 10, well past their turnaround time. Then – as the saying goes – it’s all downhill from there…

Hall’s troupe included Michael Groom (Thomas M. Wright), with amputated toes from a previous climb, and Yasuko Namba (Naoko Mori), aspiring to conquer the Seven Summits (Everest her last, after Kilimanjaro, Denali, Elbrus, Aconcagua, Carstenz and Vinson). After summiting Everest, she would die on the way down… 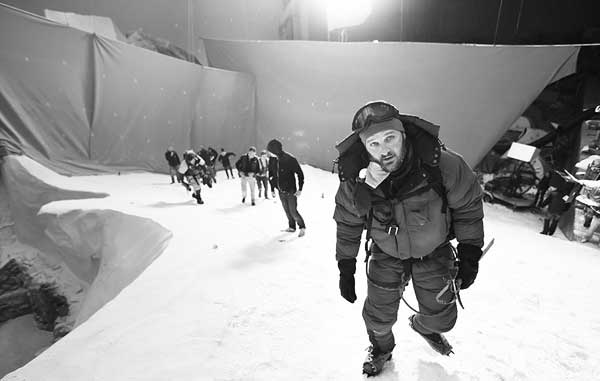 Icelandic director Baltasar Kormákur (2 GUNS) injects realism by throwing the actors onto the Base Camp slopes of Everest. That’s real ice. That’s real mountain. That’s real pain. It lends weight and credence to this whole endeavor. Even in the face of life-threatening stupidity…

Consider: Doug Hansen, who failed to summit last year, is back this year to try again; he can’t afford a third attempt. When Hall urges him to turn around due to the late time, Doug begs Hall to take him the last few hundred feet to the summit. There is a look in Hall’s face that says, “I will sacrifice myself for this man’s dream.” Now whether the real Rob Hall had that look on his face, it is conveyed perfectly here by Jason Clarke, in a beautiful moment of selflessness. It seems like a noble sacrifice. But hang on a minute!: Doug’s dream is not to save a children’s hospital or blow up an asteroid to save civilization – it’s to fulfill a pointless dream of standing on a high rock. After it all goes foul trying to shepherd the unconscious Hansen down the hill, heartbreaking scenes of Hall calling his wife from the high mountain, knowing he is going to die there due to this fool he helped.

For failing to listen to Hall’s advice, Doug also lost his life. As did Hall’s assistant Andy Harris (Martin Henderson), who tried to save them both. Scott Fischer, who was suffering from a stomach virus and possibly HAPE (High Altitude Pulmonary Edema – fluid in the lungs), and pushing himself past his limits, also died that day after summiting. Climbers can still see the dead bodies of Hall and Fischer on the slopes (for practical purposes, bodies in certain areas cannot be brought down without risking others’ lives). 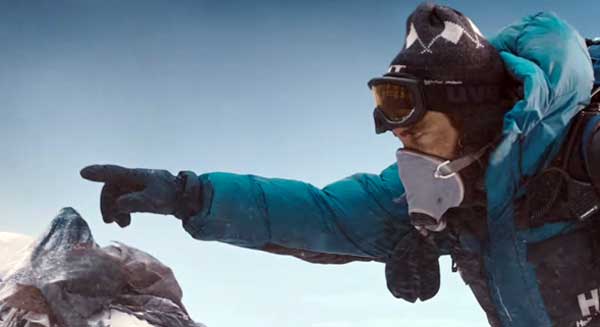 It is not stressed in the movie, but there is a morbid morality at work on Everest (and, I’m presuming, on any climbable mountain). Yes, there are many stories of heroism and sacrifice, but if a climber you encounter is in distress and not on your team – it is very rare they are given aid. It is encouraged NOT to give them aid, so that you won’t end up dying yourself for lack of resources. There is an anecdote in Krakauer’s book about a 3-man Indian team that was in distress on the way up. An ascending 3-man Japanese team passed them but offered not one whit of aid or liquids or oxygen. The Japanese passed the Indians again on the way down: one had disappeared, one was dead, one dying. Again, no aid. This is not just the Japanese treating the Indians badly – this is how EVERY TEAM treats every other team. So in EVEREST, when Hall suggests to Fischer that they “team up” due to the heavy tourism on the slopes that year, it meant they would both look out for both their companies’ clients. With that alliance, there was the unspoken directive that they would NOT look out for clients on any other teams!

Which means that even if you make it to the top of Everest – at what cost to your humanity? You are passing dead climbers that you are not allowed to bring back down respectfully; you are using supplies carried by Sherpas risking their lives for your elitist ass; you are using ropes and ladders laid by Sherpas and other tour guides who have died for your pastime; you are ignoring the plight of other teams; you are closing your conscience off to the cries of distress from other humans, you are doing something completely useless to humanity’s forward momentum. You’ve lost everything to gain what you believe is “something.” The mountain has taken everything from you and given you nothing.

“The last word always belongs to the mountain.”
— Anatoli Boukreev.

The Sherpas featured in EVEREST are Ang Phula Sherpa and Pemba Sherpa, two Nepal natives who portray the unsung heroes of Everest. If summiting is what it’s all about, then the Sherpas are gods amongst men.

Acclimatized to the altitude and living on the surrounding slopes (thus rarely requiring bottled oxygen), while performing their job of aiding tourists, the local Sherpa guides summit Everest constantly without any fanfare. Even Edmund Hillary could not have done it without Sherpa Tenzing Norgay! Leave it to the white man to make a big deal out of climbing this rock – with supplemental oxygen, and ropes and ladders laid by the Sherpas!

A list on Wikipedia that records all Mount Everest summiters by number of times to the summit shows the first eight as Nepal natives. No surprise. Also no surprise that the list is admittedly incomplete. Who knows how many times these quiet people have scampered up and down saving lives and taking names?

The rich elitists who “conquer” Everest treat it like an unattainable, hallucinogenic Shangri-La, while not giving enough credit to the Sherpas because they are hardy natives who are acclimatized to the hill. But where do you draw the line on the fairest way to summit? If it weren’t for supplemental oxygen and so much aid, half the tourists who summit would die grisly deaths. You wanna do it right? Do it like a Sherpa!